Shamrokon is the 36th Eurocon and the ESFS Awards presentation will take place at the convention starting with tomorrow in Dublin, Ireland.

Eurocon is the European annual science fiction convention held in one of the European countries. The organising committee of each Eurocon is selected by vote of the participants of the previous event. The procedure is coordinated by the European Science Fiction Society (http://esfs.info/).

The first Eurocon was held in Trieste, Italy, in 1972. The European SF Awards are given in most of the conventions giving recognition to the best works and achievements in science fiction.

It is a special once off event, as it is the European science fiction convention which is held in a different country each year, with people travelling from all over the world to attend.

Eurocon 2014 (Shamrokon) is a three day event, run by SF, fantasy and horror fans for other fans. It is not a corporate run event, how ever while the committee are volunteers, they have nearly two centuries of experience running events and conventions between them. This means those who sign up to attend, become members and get to take part in the discussion panels, can contribute and suggest programme items they would like to see happen. 1,038 people from 33 countries are registered : http://www.shamrokon.ie/membership/membership-statistics

The hotel is near to the Grand Canal on the south side of the city centre. It is located 15 minutes walk away from Stephens Green and is well served by public transport.

There will be some wonderful Guests of Honour and several authors who are members and will be taking part in discussion panels. But there is more to Shamrokon then just discussion panels there is the art show, the trade hall, a film festival – check out the What’s On section for more!

Program will be exciting and thought provoking. It will cover the History of the Fantastical in Ireland along with more modern thinking and writing. European and world SF & Fantasy will also feature heavily. Of course with artistic and translation Guests of Honour you can expect both of those areas to feature heavily. 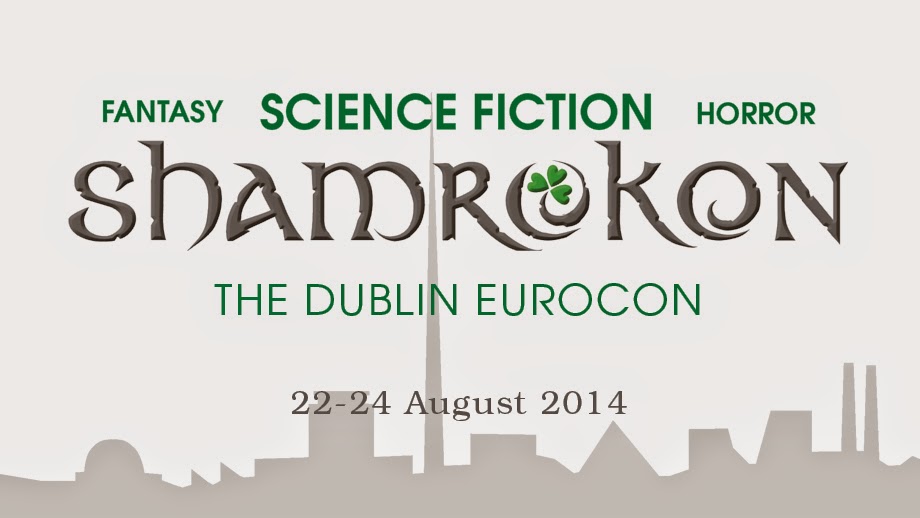 The Conventions Opening ceremony is the true start of the convention, we will introduce to our Guests of Honour and get the convention truly started.

The Sixth annual Irish Short Science Fiction, Fantasy, and Horror short film Awards. This is a collection of the best short films from around the world. There is both a Juried award and an Audience Award. The films will be shown to both jury and audience during the weekend. The winners will be  announced at the Closing Ceremony.

The talented folks from the Tantalus Theatre Company (link is external) will be putting on an original piece for Shamrokon on Saturday evening. We haven’t got all the details yet, but we know it’ll be very funny and relevant to the community.

Shamrokon is, of course, a Eurocon and on Saturday night we plan to celebrate many of the countries and people that made our fandom great! Join us for a mix of food and drink from around Europe, great conversation and a party that we’re sure will run long into the night.

Marking the 200th birth anniversary of Irish author Joseph Sheridan Le Fanu (1814-1873), Eurocon is pleased to announce a Le Fanu programming track at this year’s convention. Known during his lifetime as Dublin’s “Invisible Prince”, Le Fanu played a pivotalrole in the development of both the modern crime novel and the dark fantastic. He is best known for gothic novels such as Uncle Silas and The Wyvern Mystery, as well as his tales of the supernatural, including “The Familiar”, “Schalken the Painter”, and the terrifyingly bleak “Green Tea”. Le Fanu’s ghost stories were praised by M.R. James, E.F. Benson, Dorothy Sayers and Elizabeth Bowen, while his classic vampire tale “Carmilla” bore a profound influence on Dracula, written by fellow Dubliner Bram Stoker. Shamrokon will feature a number of panels and events hosted by international experts paying tribute to the life and works of Dublin’s master of the macabre.

This will feature the Golden Blasters and the ESFS Awards ceremonies.

You can find the programme here http://guide.shamrokon.ie/

Discussion panels will form the backbone of our programme, with subjects as wide ranging as Irish horror (check out more details on the Le Fanu track below), celtic gods & magic, South American SF, Sibling rivalry in SF & Fantasy, the complications of Pseudonyms, filking, comics and much, much more. These panels will feature professionals, experts and fans (often all three in the same person!) discussing the topic and throwing the coversation open to the audience. Currently there are 80 panels and a number of workshops with professional writers & artists.

Eurocon 2014 (Shamrokon) will feature several readings from the many, many authors who’ll be joining for the weekend.

Before becoming a writer, Andrzej Sapkowski studied economics and worked as a sales representative. His short story, The Witcher (Wiedźmin) was published by Fantastyka in Poland in 1986. This led to a series of short stories and novels, and his popularity grew through the 1990s. He has won five Zajdel awards and the prestigious Polityka’s Passport award, which is awarded annually to artists who have strong prospects for international success. In 2001 the Witcher was adapted into a TV series and computer game.

Ylva Spångberg was born in Södertälje, a town some thirty kilometres south of Stockholm, on the 28th of October, 1961. In 1973, when she was eleven years old, she joined Forodrim, the recently formed Stockholm Tolkien Society, and by 1977 she was editing their magazine, which brought her to the attention of Swedish SF writer and editor John-Henri Holmberg. Holmberg thought she wrote well, and asked if she was interested in translating. She was. ‘The first book was a veritable disaster,’ she says, ‘but I was only sixteen.’ Holmberg gave her more work, though, mostly on Science Fiction titles. She liked translating, and continued to pursue it as a career.

Michael Carroll has been the bedrock of Irish Science fiction for over twenty years. As a fan, he has produced fanzines, run conventions, built websites, and has always been around to offer support and wise words to whoever needs them. He met his wife Leonia at the very first Irish National Convention, Octocon, in 1990, and they have attended every Octocon since.

Jim Fitzpatrick was born in Dublin, the grandson of Victorian illuminator Thomas Fitzpatrick and the son of Jimmie Fitzpatrick a well known photojournalist in Dublin with the Irish Independent and the Irish Times.

It’s hard to believe Seanan McGuire’s first novel was published in just 2009. Since then she’s had ten novels published, won the John W. Campbell Award for Best New Writer and been nominated for numerous other awards, including five Hugo nominations. Her four nominations on the 2012 Hugo ballot (two under her own name and two under her pseudonym Mira Grant) made her the first woman to have been on the Hugo ballot more than three times in a single year. Shamrokon is delighted to have her as a Guest of Honour.

All five of our Guests of Honour we’ll be interviewed and they’re encouraged to tell the con what they love, what they think and what they’ll be doing next ! 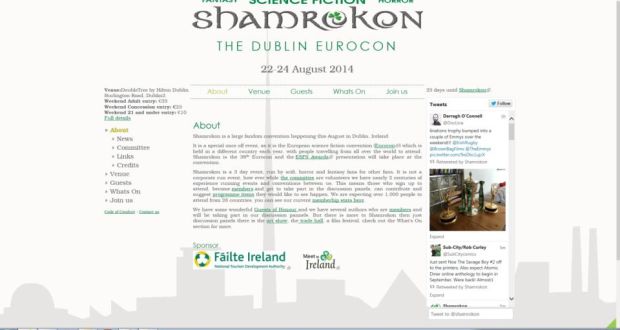 The European Science Fiction Society is proud to announce the Winners of the 2014 ESFS Awards. These awards were announced on the 24th of August 2014 at the 36th Eurocon, Shamrokon, in Dublin.

These Awards are granted just once by the European Committee by secret ballot from the nominations submitted by the National Delegates.

*A tie occurred and both creators are awarded.

These Awards are granted according to the suggestions from the National Delegates to a young writer or artist from each European Country.