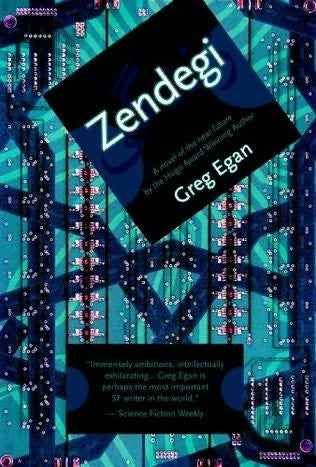 I came across Greg Egan many years ago, reading a short story titled “Wang’s Carpets”, where he described aliens living in Fourier space, in naturally evolved quasi-computer, based on seaweeds in an ocean on another planet. If it sounds complicated, this is because it is a complicated concept that blurs the border between the natural and the artificial.

Also, it is not surprising, because Egan is a mathematician and apparently, a geek (this is a compliment in my eyes). I liked the story, and eventually I discovered, that it has become a chapter of his novel “Diaspora”. It took a friend bringing me a copy from Australia before I managed to read it, and I liked too. Over the years I kept an eye on his work, and when “Zendegi” appeared, it quickly found a place in my “to read” list.

“Zendegi” begins in a very different mater than anything else I saw by Egan. The first third of the book, set in 2012, reads like a contemporary novel. It describes a peaceful revolution that brings down the religious Iranian dictatorship. Back in 2010 it may have seems even more contemporary and realistic than today. Of course, in hindsight, after seeing the bloodbaths in Libya, Syria and now in Ukraine, I am less inclined to believe in peaceful changes of political systems. But this is science fiction, so some suspension of disbelieve is acceptable.

The story follows the protagonist Martin, an Australian journalist, sent in Iran by a major news service, to report on the political turmoil. We are given a hint that he may go native, when he tells his local colleague and friend that he likes very much the Iranian cuisine.

“Find an Iranian wife” he hears back. “Were can I search for one?” “In front of a divorce court.”

We are given one more hint about what the book may be from the other protagonist – Nasim, a daughter of a killed Iranian dissident. She is a political emigrant in the US, and a researcher, trying to model the singing skills of birds. Except, the computer birds don’t sing too well.

Fast forward to 2027/8. Martin is indeed married to an Iranian woman, albeit not one he has found in front of a divorce court. They are rising a son, who is just about to start going to school. On his first day of school a disaster strikes. And then another one. Until we understand that ultimately this is not a trans-humanist post-singularity novel, but a story of personal loss loss of friends, loss of a country and culture. This is a novel about how to cope with those losses. It tries to answer the question if technology can help us in this impossible endeavor.

In my interpretation of “Zendegi”, the author ultimately paints the technology as a tool, and points that the real help and friendship come from the people behind it. So do our failures and successes.

The novel’s conclusion is neither particularly optimistic, not too pessimistic, but it is surely one that made my hearth heavy with sadness.

I highly recommend “Zendegi”. It is a complex novel, but not mathematically, as “Diaspora” ; it is an intricate novel on psychological level. At the end, one of the main characters reaches a satisfying closure, but the story line of the other leaves some unanswered questions, possibly hinting at a sequel.

Among the elements I especially liked are the inner monologues of Martin, as he is parenting his son, glimpses we get into the artificial reality environment Zendegi (life, in Persian), the Persian mythology and the many Persian words that are sprinkled on the novel without translation (but there is always Google).

The author’s website (www.gregegan.net) has an excerpt, some additional information, and a nice travel log kept during the visit of Egan in Iran in 2008. The video trailer of the book can be seen at: http://vimeo.com/9827433

Greg Egan published his first work in 1983. He specialises in hard science fiction stories with mathematical and quantum ontology themes, including the nature of consciousness. Other themes include genetics, simulated reality,posthumanism, mind uploading, sexuality, artificial intelligence, and the superiority of rational naturalism over religion. He is known for his tendency to deal with complex technical material, like inventive new physics andepistemology, in an unapologetically thorough manner. He is a Hugo Award winner (with eight other works shortlisted for the Hugos) and has also won the John W Campbell Memorial Award for Best Novel.

His early stories feature strong elements of supernatural horror. Egan’s short stories have been published in a variety of genre magazines, including regular appearances in Interzone and Asimov’s Science Fiction.

Greg Egan holds a Bachelor of Science degree in Mathematics from the University of Western Australia, and currently lives in Perth

Valentin D. Ivanov (born in the town of Burgas, Bulgaria in 1967) is a Bulgarian SF writer, essayist, reviewer and astronomer working in the European Southern Observatory, mainly at the Cerro Paranal site, Chile. Among his primary research areas are the dynamics of star clusters, formation of stars, brown dwarfs, and exoplanets around such objects. He had obtained his master degree in physics and astronomy at the University of Sofia in 1992. He earned a PhD degree at the University of Arizona, Tucson, Arizona, U.S.A. in 2001. He became a fellow at the European Southern Observatory, Cerro Paranal, Chile and since 2003 he has been a staff astronomer at the European Southern Observatory, Paranal where he is instrument scientist for the wide-field near-infrared camera VIRCAM mounted at the VISTA_(telescope). In 2006, together with Kiril Dobrev, he has published a Science Fiction story collection in Bulgarian.
Valentin Ivanov and Ray Jayawardhana are two of the pioneers of the investigation of the planemos, a special cast of exoplanets. They discovered the first double planemo Oph 162225-240515. This discovery, came just before the debate about the 2006 planet definition, and posed the problem about the distinction between planets and low-mass stars (brown dwarfs).
Some of his English language SF stories, „Crossroads”, „How I saved the World”, „Job Interview” , “Unstable atmospheric circulation”, are online and also some of his reviews :http://sffportal.net/author/vivanov/ and essays : http://worldsf.wordpress.com/tag/valentin-d-ivanov/