“I don’t mind English as our lingua franca for communicating between us, Europeans. In any case, we need a common language if we want to communicate. But I would never write my fiction in any other language than my native Serbian. It is the language of my art. When I wish a prose text of mine to be available in English translation, I rely on a good English translator.” – Zoran Živković

If you are visiting Belgrade, coming from an English language country, and decide to enter a bookshop, you might be quite surprised to realize that as much as 70 percent of the titles in it are translations. My hometown is no exception in this regard. It is a common scene throughout Europe, a continent recently united in many ways – political, economic, cultural – but still very diverse linguistically.

We have no state borders anymore; one travels from one country to another without being aware of the crossing at all, and yet invisible language borders are still there. If you move 200 miles almost in any direction, the probability is high that you will start noticing road signs in a different language.

To someone originating from a monolingual land this might cause confusion, even headache. We Europeans certainly don’t see it as a problem. For us, our multilingual culture is our advantage, not our disadvantage. Our language diversity is our richness, not an obstacle. Bookshops full of translations are a quality we are very much proud of.

I have heard that many readers in the US were astonished to discover that The Iliad, Don Quixote, The Brothers Karamazov, The Little Prince and The Bible itself are all translations into English.

But is it really so ? I would say not. It is actually a classic “Catch-22” situation. How can we know that English-speaking readers are not interested in translated books if they don’t have a chance to buy them in the first place ? Or even if they do, the fact that the book is a translation is often well hidden from them, somewhere in small print at the back of a volume. Occasionally, even the translator’s name is deliberately omitted.

It is no wonder, then, that an innocent reader remains under the impression that some of the greatest works of world literature were originally written in English…

I myself faced this discrimination when I started my long adventure of trying to place my books with US and UK publishers. My first agent suggested that, first of all, I should change my name. “What do you mean ?“, I asked incredulously. He meant I should choose a pen name, preferably something that would sound American. „Like what ?“ „Well, we could try to find an analogous version of your original name“.

„What would that be ?“ After a brief etymological consideration, he boldly proposed: “Donald Livingston”.

„Why would I be Donald Livingston instead of Zoran Živković ?“

„Can you really imagine, he asked, that anyone called Zoran Živković would ever be able to publish anything in the USA ?“

I could. He couldn’t. So, inevitably, we went our separate ways.

Eventually, after a decade and a half, I have seen all my books published in the US and UK. But this is an exception. I am very fortunate to belong to the privileged 3 percent. Many excellent writers are not. Their books, even when they are available in impeccable English translation, remain unavailable to readers in the US and UK simply because their authors have “inappropriate” names. Or because their prose is allegedly not “marketable.”

Is there any hope that the situation might improve some day ? It would be far too naïve, of course, to expect that any US or UK bookshop would ever contain as much as 70 percent translated books, but could we dream of, let’s say, 10 to 15 percent ?

Quite frankly, I am not very optimistic. We are dealing with a powerful, cruel, merciless enemy — the publishing industry. They certainly know how to protect their selfish interests. Should we then give up ? By no means ! We should try everything humanly possible to change the circumstances. If we do nothing, even the current 3 percent could quite easily evaporate to zero.

Posted with the kind permission of Prof. Zoran Živković. We’re thanking him. 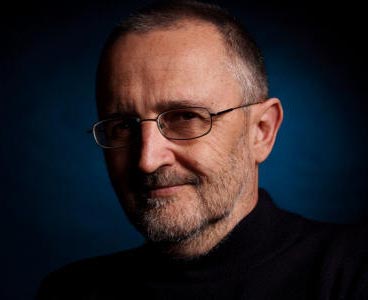 Zoran Živković, born October 5th, 1948 (writer, essayist, scholar, publisher, translator, Professor of Creative Writing at the University of Belgrade, Serbia) is the winner of the World Fantasy Award in 2003 for his novella “The Library”.

Zoran Živković is one of the world’s famous European writers.

Zoran Živković is also a powerful, relevant essayist and encyclopedist of science fiction, the author of twenty books of fiction and eight non-fiction volumes. Prof. Živković ‘s books have appeared in 70 international editions in more than 20 languages​​. “I never wanted to be the VIP from my village so I had to take my chances in the city, getting English translations of my writings. A text written in English can be read not only in Anglophone countries but across the globe. I confess that I have always envied native authors who write in English. First, they should not care about any translation of their works. Secondly, they don’t have to pay for translations. The publishers are doing it.“ – Zoran Živković

In 1973, Zoran Živković graduated in literary theory from the Department of Comparative Literature in the Faculty of Philology at the University of Belgrade. He received his master’s degree in 1979 with the work “Anthropomorphism and the Motif of the First Contact in the Works of Arthur C.Clarke” (Antropomorfizam i motiv prvog kontakta u delima Artura Klarka) and his doctorate in 1982 from the same university. His dissertation was “The Appearance of Science Fiction as a Genre of Artistic Prose” (Nastanak naučne fantastike kao žanra umetničke proze).

From the mid-seventies to the early nineties Živković was widely involved with science fiction. Apart from his two theses, he was a publisher (founding the Polaris imprint, through which he released over two hundred books), a translator (translating more than 70 books, mostly from English), an essayist (four of Živković’s books of essays appeared in this period), a researcher (producing a large, richly illustrated, two-volume „Encyclopedia of Science Fiction“) and a TV host (he wrote and hosted a television series about science fiction cinema, titled „The Starry Screen“).

From the mid-nineties onward, Živković discontinued his engagement in SF and turned entirely to writing non-generic fiction. In this capacity he defines himself as “a writer without any prefixes – a humble practitioner of the ancient and noble art of prose.”

Between 1993 to 2013 he wrote 20 books of fiction which were published in 70 foreign editions in more than 20 countries.

Živković has won several literary awards for his fiction.

In 1994 his novel „The Fourth Circle“ won the “Miloš Crnjanski” Award.

In 2003, Živković’s mosaic novel „The Library“ won a World Fantasy Award, and was nominated in 2004 for the International IMPAC Dublin Literary Award.

In 2007 his novel „The Bridge“ won the “Isidora Sekulić” Award and also in 2007 Živković received the “Stefan Mitrov Ljubiša” Award for his life achievement in literature.

Two of Živković’s stories were produced as radio broadcasts by the BBC: “The Train” (2005) and “Alarm Clock on the Night Table” (2007). The prestigious US literary magazine World Literature Today brought a special section on Živković’s writing in the November/December 2011 issue.

In 2007, Živković was made a professor in the Faculty of Philology at his alma mater, the University of Belgrade, where he now teaches Creative Writing.

His writing belongs to the middle European fantastika tradition, and shares much in common with such masters as Mikhail Bulgakov, Franz Kafka and Stanislaw Lem.

“Fundamentally, there are only two themes in the noble art of fiction : love and death. The rest are only derivates. Eros and Thanatos are in constant conflict in my prose. In my humble opinion, I obtained results when I manage to reconcile these opposites” – Zoran Živković

„A new generation of the students attending Professor Zivkovic’s creative writing course at the Faculty of Philology, University of Belgrade, about to finish their first semester…“

A Visit to the Ars Electronica, Austria´s Museum of the Future

Always Outside, Looking In ? by Floris M. Kleijne (Netherlands)