Home Reports Reviews „ Worm in an Autumn Wind” – A Review by Valentin Ivanov...

Thirty years ago Liubomir Nikolov, a young and promising writer at the time, asked the question how one can tell if the surrounding world is nothing more than a computer simulation. He wrote about it “Worm in an Autumn Wind”  – a short novel, titled with a line from a classic Basho haiku. 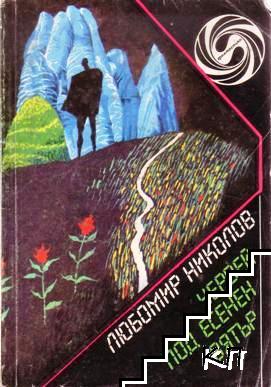 The simulation scenario is one of the possible solutions of the Fermi paradox. According to it the humanity lives in a simulated Earth, all we can touch and see is nothing more than a product of complex calculation in some gigantic powerful computer, including the distant stars and galaxies that we can not touch. Today this is a popular concept, and there are countless novels based on the same idea. I will mention just one example – “Restoration Game”, by Ken McLeod. The premise of that novel is well woven into the history of the modern world, offering fantastic explanations of some twists and turns of the historic processes, but most of all, asking ethical questions like whether the suffering of simulated humans is real or not.

Disclaimer: Bellow I will reveal the story line and the ending of Worm in an Autumn wind. Sadly, I find it unlikely that the book will see (a deserved) English translation.

Back then the young Liubomir Nikolov confronted his characters and readers with the same moral dilemma. The book was split into three parts – the first was action packed story of the cosmonaut Grem Trool. Vacationing on an isolated planet, all alone (not counting his intelligent black panther) he finds himself in morphing and increasingly strange reality – e.g. the robots that attach him can easily tear apart the shielding of a space ship, bat just as easily fall victims of the rocks that he throws at them. Eventually, everything turns into a grotesque cartoon with bright, single shade colors. The reader can easily recognize the early animation of Disney, but Trool suffers from memory losses and has to struggle with great difficulties to stay afloat in this strange game, that the “players”, as he calls them, have imposed on him.

The second part features talking heads. Literally, because most of it takes place in a TV studio where a talk show host tortures, as much as he can, a Nobel price winner, professor Lembovich. The professor won the award for creating the videonics. Gradually the readers come to understand that this is a technological achievement, rather than a scientific discovery (the question which category he won the prise in remains open). This is “a TV with the randomization of real life”, as one of the characters puts it. We are provided a further explanation by example: in one realization of a videonics show the lead sees a poisonous snake by chance, in another he doesn’t; respectively, the story takes different turns. Therefore, the story that happens in each videonic device is unique, different from the stories that happen in the other devices. There are probably millions of “simulations” in that world, as we would call them today. They are part of the households, and the characters from them have grown so close to the people who own the videonic devices, that they are almost family members. Yet, there is no communication between the show and the outside world (much like in the “Restoration Game“). The owning is (distantly) reminiscent of slavery, but this parallel is not fully explored. It is rather the viewers’ deattachment that is critisized, as we will see towards the end of the novel.

Intriguingly, the creator of the videonics rejects the mobile version outright, he can’t imagine people walking around and watching the shows – so, no mobile devices are forthcoming in the world of the “Worm…”

The final third part brings the two story lines together. It is reviled that the videonics institute in the country where the inventor has been invited has achieved a major break through: more computer memory, better (as we would say today: Internet) connection and data compression, and the videonics characters are now on the brink of becoming conscious intelligent beings. Or may be they already have become intelligent beings? Hearing about the experiment, professor Lembovich wants to go straight to the lab, to see what was done, and how. At this point the readers may become to wonder if the real motivation behind the invitation was to make the announcement in front of a larger audience, attracted by the popularity of the Nobel Prize winner.

In the novel’s climax Grem Trool appears in the studio and we understand that he is a character from the stock space-opera type simulation that was used in the experiment. It has succeeded beyond the expectation of its creators. The cosmonaut starts to ask them hard questions… The scene is reminiscent of the Babylon-5 episode when Delen, upset with the talking heads on a TV who proceed to trash her and Scheridan’s lifelong work, appeared in the studio to give them some trashing on her own.

Trool also proceeds to trash the creators of the simulation: aren’t they people, how could they let their creations to suffer? Professor Lembovich explains that the simulations can not be tampered, they lack the option to take input from the viewers by design. Just like the movies on TV. Indeed, the videonics turn out to be no more than a personalized TV experience. Lembovish apologizes and admits that the humanity has lost the understanding where the art stops and the peepshow begins.

The readers are offered one final surprise – the epilogue reveals that the story so far was in fact the first videonics movie! It was prepared by an assistant in the research lab that made the very first steps in the development of this new technology. Professor Lembovish doesn’t exist, and his Nobel prise appears to be an insider joke between the assistant and the head of the lab. The head was ill, and he is recovering now, while his team keeps working; they did realize the responsibility that the development of the videonics puts on their shoulders, and their first film “production” was an exercise in facing this responsibility. At the end, Liubomir Nikolov turns out to be even more optimistic for the future of the humanity than what one might have expected from reading the main body of the novel.

The lack of viewers feedback which would have made the simulations more akin to the modern computer games than to the TV does make the “Worm…” a bit technologically outdated; the lack of mobile devices doesn’t help, either. However, from moral and ethical point of view the novel is just as fresh as it can be. In fact, the advances in the computational technology have made the problems discussed in the novel much more tangible. It is no surprise, that the themes of the Worm… appeared in a score or modern works of fiction: the novels “The Girl Who Was Plugged In”, by James Tiptree Jr., “Darvinia”, by Robert Charles Wilson, “Surface Detail”, by Iain M. Banks, “Time Out of Joint”, by Philip K. Dick, the movies “Tron“, “Nirvana“, “Her“, and indeed the “Truman Show” (albeit the simulation there is not computer based), to name a few.

Liubomir Nikolov (b. 1950, Kazanlyk, Bulgaria) studied for an engineer, but spent almost all his professional life so far, working at national Bulgarian TV and various periodicals. His first two novels “The Court of the Generations” and “The Mole” appeared in 1978 and 1981.

“Worm in an Autumn Wind” was his third long form work.

His novel “The Tenth Righteous Person” (1999) was elected by the fans as the best book of the decade 1990-1999. He has written numerous short stories, and he was one of the pioneers on the gamebook genre in Bulgaria, creating numerous works, many of them under pen names.

Liubomir Nikolov gained wide popularity as translator of “The Fellowship of the Ring” (which brought him an award by the Bulgarian union of translators) and other novels by J. R. R. Tolkien, of the original “Dune” novels by Frank Herbert, and many works by Ernest Hemingway, John Grisham, Clifford Simak and Robert Sheckley.

His blog (in Bulgarian) can be visited at:  http://narvi.zavinagi.org/

Valentin D. Ivanov (born in the town of Burgas, Bulgaria in 1967) is a Bulgarian SF writer, essayist, reviewer and astronomer working in the European Southern Observatory, mainly at the Cerro Paranal site, Chile. Among his primary research areas are the dynamics of star clusters, formation of stars, brown dwarfs, and exoplanets around such objects.

He had obtained his master degree in physics and astronomy at the University of Sofia in 1992. He earned a PhD degree at the University of Arizona, Tucson, Arizona, U.S.A. in 2001. He became a fellow at the European Southern Observatory, Cerro Paranal, Chile and since 2003 he has been a staff astronomer at the European Southern Observatory, Paranal where he is instrument scientist for the wide-field near-infrared camera VIRCAM mounted at the VISTA_(telescope). In 2006, together with Kiril Dobrev, he has published a Science Fiction story collection in Bulgarian.
Valentin Ivanov and Ray Jayawardhana are two of the pioneers of the investigation of the planemos, a special cast of exoplanets. They discovered the first double planemo Oph 162225-240515. This discovery, came just before the debate about the 2006 planet definition, and posed the problem about the distinction between planets and low-mass stars (brown dwarfs).
Some of his English language SF stories, „Crossroads”, „How I saved the World”, „Job Interview” , “Unstable atmospheric circulation”, are online and also some of his reviewshttp://sffportal.net/author/vivanov/ and essays :

“Back down along the spiral that heads up”- Review of Jack...

The New Tower of Babel – A Review of “Central Station”...