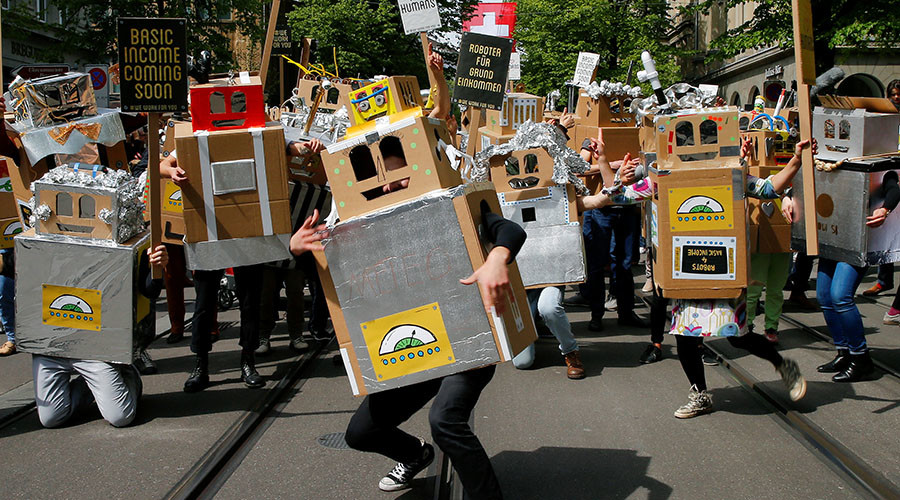 For the past 18 months people all over Switzerland have been campaigning for the “Citizens’ Initiative for Unconditional Basic Income”.

Today the result of their efforts will be handed to the Swiss Federal Chancellery: 116,000 signatures (the minimum required number of signatures for the initiative to trigger a referendum was 100,000). The success of the initiative means that citizens of Switzerland will be the first in the world to vote on “Unconditional Basic Income”.

“Switzerland become the first country in the world to hold a nationwide referendum on the introduction of an unconditional basic income on Sunday, the 5th of June 2016. In Finland, the government is considering a trial to give basic income to about 8,000 people from low-income groups. Different groups would be given different amounts, to try to find out whether more generous payments would deter people from seeking paid work.

Meanwhile the Dutch city of Utrecht is also developing a pilot project for basic income.

The Canadian province of Ontario announced, as part of its 2016 budget, plans to embark on a basic income experiment. While the full scope of the project has yet to be announced, Canada has said its purpose is to establish whether a basic income could lead to overall social services savings.

Around the world, many governments, from Australia to Canada, are taking a closer look at the administrative costs of running complex welfare systems and asking themselves whether a basic income would simply be cheaper.

“With a wave of technological change on its way, driverless cars, robotic surgery, the elimination of finance and accounting jobs, clearly there is going to be a huge disappearance of jobs. No one can really explain where the new jobs are coming from, so it would be foolish for a country not to prepare for what may be the greatest technological revolution in the history of the world“, declared Professor of Labour Relations Andy Stern and he believes increased automation, as illustrated by those dancing robots in Zurich, is the most important reason for governments to think very seriously about basic income. “Any good country needs to think about what’s next,” he told Swiss television.

Supporters point to the fact that 21st-Century work is increasingly automated, with more and more traditional jobs, in factories, retail and even in finance and accounting, being done by machines. And they do not need salaries. 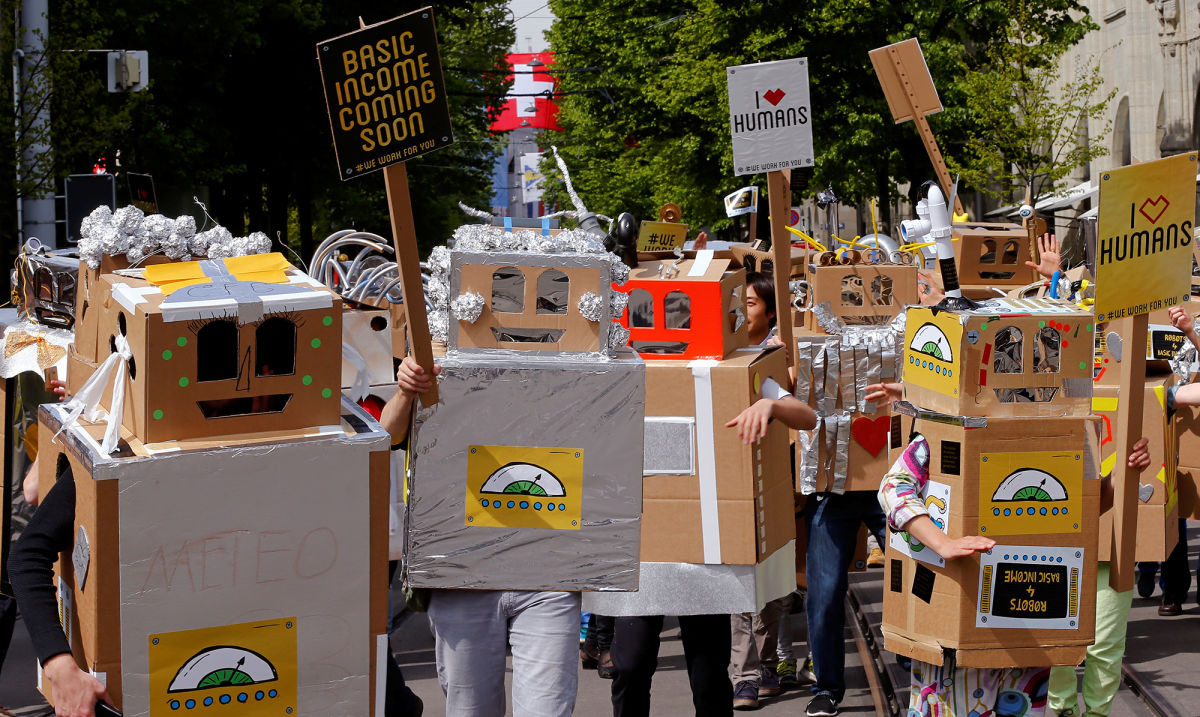 The campaign has staged some eyecatching demonstrations, including one in which hundreds of “robots” danced through the streets of Zurich, promising to “free” humans from the daily grind of Monday to Friday work, just to pay the bills.

“The robots are saying ‘we don’t want to grab your work and make you suffer’,” said campaigner Che Wagner. “We want to make you free, that’s why they want a basic income for us humans.”

“Theoretically if Switzerland were an island, basic income would be possible. You could cut down on existing social payments and instead pay a certain amount of money to every individual. But with open borders it’s a total impossibility. If you would offer every individual a Swiss amount of money you would have billions of people who would try to move into Switzerland.” – Swiss People’s Party (SVP) representative Luzi Stamm.

Switzerland is one of the wealthiest nations in the world, but it is also one of the priciest to live in. Swiss officials have estimated it would take $25.6 billion to cover the annual costs of the proposal, and that would lead to deep spending cuts or significant tax increases. 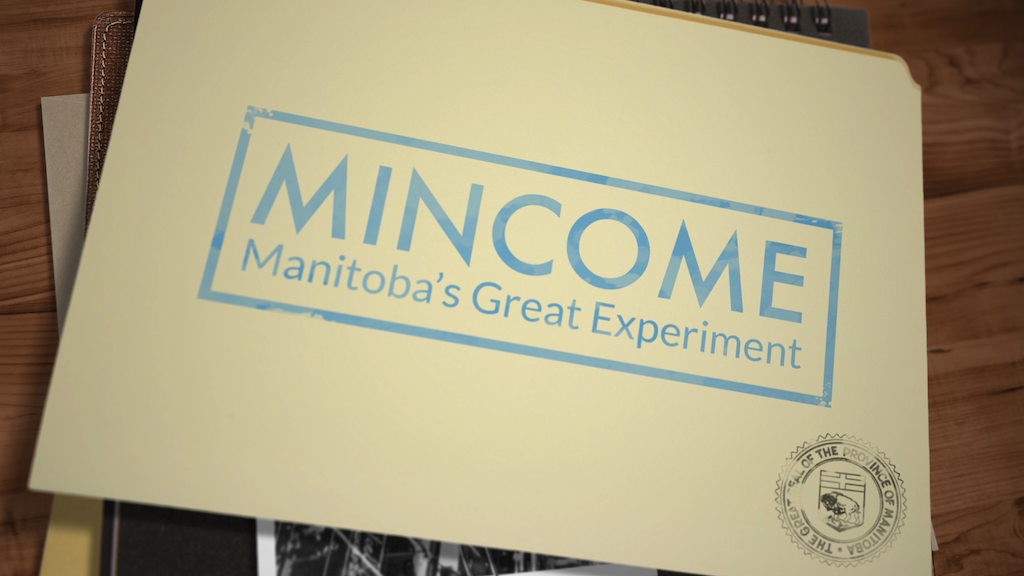 Often referenced when referring to successful examples of basic income, it was actually a prime example of a minimum income.

Between 1968 and 1980, five such experiments were conducted in North America, primarily to investigate the impact of basic income on the labour market. The Mincome study was unique because, while it also focused on the working poor, it did not eliminate the elderly or the disabled. This makes it a much better benchmark for how a real program would operate.

Each family or individual in Dauphin was eligible for a set monthly amount, which replaced any benefits they might have been receiving prior. Their mincome supplement was then reduced by fifty cents for every dollar they earned by working. Because Dauphin was an agricultural community, where incomes were heavily dependent on harvests, many residents did not know in advance whether they would get a mincome stipend. Only 1,000 residents ended up receiving them, and everyone knew the experiment was temporary (which some argue affects the results).

Mincome was a staggering success. The fear that people wouldn’t work if they didn’t have to proved unsubstantiated; working hours dropped only one percent for men, three percent for married women, and five percent for unmarried women. Mothers with newborns got to stay at home longer, teenagers were more likely to graduate, and hospital visits dropped eight percent. There was also a reduction in rates of psychiatric hospitalization, and in the number of mental illness-related consultations with health professionals. As far as scale, however, Mincome was relatively small. Dauphin is a small agricultural community, with a population of roughly 8,000. That’s a very small sample size on which to judge a program that would need to span an entire country. And the only use-case for something so far-reaching has far less impressive results.

Unfortunately there was a change in government, the program was abandoned, and the results were largely ignored. It wasn’t until Evelyn Forget published an analysis of the results in 2011 that people began to take notice.

Canada had done something incredible, and it was something that could be done again. Support this initiative and encourage the European Commission to find ways of tackling austerity and providing growth, by signing the ECI here: http://www.basicincome2013.eu/ubi/signup-page/