The World’s Biggest Science Fiction Festival, UTOPIALES, is taking place in Nantes (France) between the 29th of October and 2nd of November.

Utopiales is not only the biggest European SF Festival, it’s the largest SF event on Earth.

As a comparison, the “World” Anglophone conventions have between 6 to 8,000 participants at maximum. By the way, the so-called “Dragon Con” isn’t a science fiction event, is just a mercantile&consumeristic – fantasy&comic books – anglo marketing&advertising tool.

The Utopiales model, to open the gates of science fiction to the general public, to gather writers, scholars, scientists, artists plus fans and readers and gamers, it’s functioning and is generating audience and awareness.

Since its creation, in 2000, Les Utopiales, The Nantes International Science Fiction Festival, has tried, as its objective, to offer works of quality to the greatest number of people, and to enable them to discover the world of futurology, of new technologies and of the fantastic. This year the festival will take place from October, 29th (with an inauguration time) to November, 2th (student day) 2015. As every year, it will develop a theme, while at the same time treating the yearly developments in the science fiction world.

The Guests of Honor are : 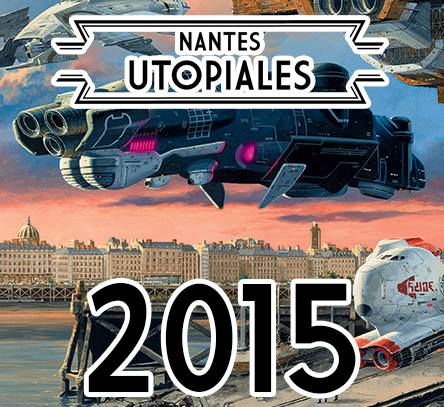 THE THEME SELECTED FOR THIS 16th EDITION, FROM OCTOBER, 29TH TO NOVEMBER 2TH, WILL BE “REALITY (IES)”

Having explored its origins in 2012, and having gave free rein to his passion for the others worlds, in 2013, then having broached the large subject of the intelligence in 2014, The Nantes International Science Fiction Festival sets a new challenge for 2015 and propose you to think about the unity of the reality, by honoring the huge speculative power of science-fiction which, under the guise of imaginary, help to think about reality in its entirely.

Four versions will serve of / as guideline to the different offers proposed to the public:

All these interrogations will be part of the programming of this new edition of our international and multimedia festival. During round tables open to the audience, scientists, authors and artists will exchange their point of views, which are sometimes divergent. Day after day, they create fabulous worlds by using fragments of the real one, to make, beyond the evasion they promise, true “experiences of thinking” which lead us to think more easily about the advent of a new world we unconsciously wished for.

Manchu is the illustrator for the poster this year.

The literary and the scientific fields, fundamental to the festival, will welcome numerous international guests, as many personality who will be present for the conference, debates or autograph sessions, which punctuate the festival. Wandering the alleys of the festival,the public will be able to discover several expositions. The cinema dimension will be also very important with the willing of showing new talents from all around the world. At last, the festival will of course be the occasion to rediscover some role-playing games, video games, programs fo young people and also the Asian pole, with the renewal of the Manga tan day and its Cosplay.

A major means of expression for science fiction, literature will offer numerous round-table discussions, meetings and debates in the heart of the Cité, the Nantes Events Center, in the space Shayol. They will be presided by our numerous national and international guests.

Again this year, the Nantes International Science Fiction Festival, The Utopiales, are organizing The European Utopiales Prize, in order to reward European authors in the genre known as the “Speculative fiction”.

This award rewards a novel, or a collection, published in French, during the literary season preceding the festival, whose author is a citizen of a country belonging to the European Community. The prize has a cash value of 2000 euros.

Past year, the award was won by Dmitry Glukhovsky for Sumerki (l’Atalante, 2014).

This year, these works are in competition:

Again this year, the Nantes International Science Fiction Festival – The Utopiales is organizing two literary prizes in order to reward European authors in the genre known as “Speculative fiction”.

This prize rewards a novel or a collection, published in French during the literary season preceding the festival, and whose author is a citizen of a country belonging to the European Community. The prize has a cash value of 2000 euros.

Past year, the award was won by Jeanne-A Debats for Pixel noir (Syros).

The pre-selection committee, made up of a librarian, a bookseller, a documentalist and a translator, has selected four works for this new edition:

Les Utopiales will take place at :

Please look at tarifs/tickets for more information about prices.

Nantes is the largest city in Brittany, France, with 800,000 inhabitants in the metropolitan area and is located 342 kilometers southwest of Paris, at the confluence of the Loire, Edre and Sèvre rivers, 50 kilometers from the Atlantic Ocean.
Since 2000, the Utopiales venue is the Congress Palace in Nantes, always fall in late October or early November. The Utopiales Festival is an event of great magnitude  and the most important SF international event dedicated to the  European SF and it’a managed to gather together  thousands of genre fans and professionals  (38,000 participants in 2006, 40,000 in 2008, 41,000 in 2010, 46,000 in 2012, over 60.000 in 2013).

The Utopiales name was suggested by Christian Grenier, a SF writer in 1997 and theUtopiales Festival was created in 1998 by Bruno della Chiesa (an Italian-born French, linguist, diplomat, researcher, SF editor) in Futuroscope (Poitiers), a huge theme park dedicated to the future.

Bruno della Chiesa coordinated the Utopiales between 1998 and 2000, and was succeeded between 2001-2005 by the historian Patrick Gyger (Maison d’Ailleurs/House of the Elsewhere’s manager ; La Maison d’Ailleurs is the only public world museum of science fiction, utopia and extraordinary journeys, in Yverdon-les-Bains, Switzerland).

Utopiales is a manifestation of the general public, the fans and the professionals. The Utopiales Festival is celebrating and exploring all means of expression of science fiction, literature, film (international competition and European contest of short films), theater, comics (best album contest, exhibitions), art exhibitions, concerts, games videos, a role playing site, plus panels, discussions and debates on scientific topics.

Since its creation, in 2000, Les Utopiales, The Nantes International Science Fiction Festival, has tried, as its objective, to offer works of quality to the greatest number of people, and to enable them to discover the world of futurology, of new technologies and of the fantastic.