The oldest science fiction program to have been broadcast on television was a BBC production, which first aired 78 years ago today: a live recording of Karel Čapek’s seminal play, R.U.R. (Rossum’s Universal Robots). 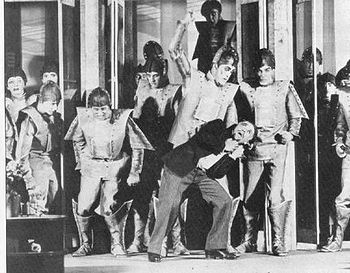 Just two years after the BBC Television Service launched, R.U.R. was adapted into the 35-minute-long production that aired on February 11, 1938 at 3:20 p.m.

It’s unclear whether any recordings survived the decades, but it’s worth noting that the play’s special effects made it a natural fit for the television format. A week before BBC first aired the program, the Radio Times advertised R.U.R. as “a play that should lend itself very well indeed to television from the point of view of effects.” Granted, the effects were probably rudimentary and the production may have used more than its fair share of tin foil, but a marketing first is still a first.

R.U.R. might have peaked in popularity in the 1920s and ’30s, but it remains the bedrock that much of modern science fiction draws on. To this day, the play is occassionally adapted and revived, and its themes run through many television shows and movies now in production. Whether it is Doctor Who, The Terminator or The Matrix, each of these science fiction franchises has a piece of Rossum’s Universal Robots at its core.” – The Smithsonian

R.U.R. is a 1920 science fiction play by the Czech writer Karel Čapek. 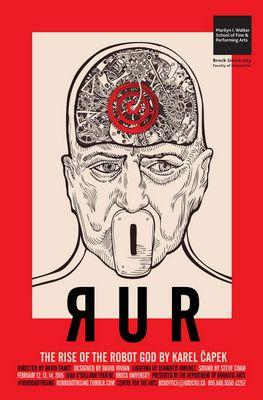 However, the English phrase Rossum’s Universal Robots had been used as the subtitle in the Czech original. It premiered on 25 January 1921 and introduced the word “robot” to all languages and to science fiction as a whole.

R.U.R. quickly became famous and was influential early in the history of its publication.

By 1923, it had been translated into thirty languages.

The play begins in a factory that makes artificial people, called roboti (robots), out of synthetic organic matter. They are not exactly robots by the current definition of the term; these creatures are closer to the modern idea of cyborgs, androids or even clones, as they may be mistaken for humans and can think for themselves. They seem happy to work for humans at first, but that changes, and a hostile robot rebellion leads to the extinction of the human race. Čapek later took a different approach to the same theme in War with the Newts, in which non-humans become a servant class in human society.

R.U.R. is dark but not without hope, and was successful in its day in both Europe and the United States.

In a limited sense, Karel Čapek’s robots resemble more modern conceptions of man-made life forms, such as the Replicants in Blade Runner, and the humanoid Cylons in the re-imagined Battlestar Galactica, but in Čapek’s time there was no conception of modern genetic engineering (DNA’s role in heredity was not confirmed until 1952).

There are descriptions of kneading-troughs for robot skin, great vats for liver and brains, and a factory for producing bones. Nerve fibers, arteries, and intestines are spun on factory bobbins, while the Robots themselves are assembled like automobiles. Čapek’s robots are living biological beings, but they are still assembled, as opposed to grown or born.

One critic has described Čapek’s Robots as epitomizing “the traumatic transformation of modern society by the First World War and the Fordist assembly line.”

Origin of the word

The play introduced the word Robot, which displaced older words such as “automaton” or “android” in languages around the world. In an article in Lidové noviny Karel Čapek named his brother Josef as the true inventor of the word. In Czech, “robota” means forced labour of the kind that serfs had to perform on their masters’ lands, and is derived from “rab“, meaning “slave.”

The name Rossum is an allusion to the Czech word rozum, meaning “reason,” “wisdom,” “intellect” or “common-sense.” It has been suggested that the allusion might be preserved by translating “Rossum” as “Reason,” but only the Majer/Porter version translates the word as “Reason”.

The work was published in Prague by Aventinum in 1920, and premiered in that city on 25 January 1921. It was translated from Czech into English by Paul Selver and adapted for the English stage by Nigel Playfair in 1923. Selver’s translation abridged the play and eliminated a character, a robot named “Damon”. In April 1923 Basil Dean produced R.U.R. for the Reandean Company at St. Martin’s Theatre, London.

The play’s American première was at the Garrick Theatre in New York City in October 1922, where it ran for 184 performances, a production in which Spencer Tracy and Pat O’Brien played robots in their Broadway debuts.

It also played in Chicago and Los Angeles during 1923. In the late 1930s, the play was staged in the U.S. by the Federal Theatre Project’s Marionette Theatre in New York.

Reviewing the New York production of R.U.R., The Forum Magazine described the play as “thought-provoking” and “a highly original thriller”.

John Clute has lauded R.U.R. as “a play of exorbitant wit and almost demonic energy” and lists the play as one of the “classic titles” of inter-war science fiction.

Luciano Floridi has described the play thus: “Philosophically rich and controversial, R.U.R. was unanimously acknowledged as a masterpiece from its first appearance, and has become a classic of technologically dystopian literature.”

On 11 February 1938, a thirty-five-minute adaptation of a section of the play was broadcast on BBC Television – the first piece of television science fiction ever to be broadcast.

In 1941 BBC radio presented a radio play version, and in 1948, another television adaptation – this time of the entire play, running to ninety minutes – was screened by the BBC.  None of these three productions survive in the BBC’s archives. BBC Radio 3 dramatised the play again in 1989, and this version has been released commercially. The Hollywood Theater of the Ear dramatized an unabridged audio version of R.U.R. which is available on the collection 2000x: Tales of the Next Millennia.

In August 2010, Portuguese multi-media artist Leonel Moura’s R.U.R.: The Birth of the Robot, inspired by the Capek play, was performed at Itaú Cultural in São Paulo, Brazil. It utilized actual robots on stage interacting with the human actors.

An electro-rock musical, Save The Robots is based on R.U.R., featuring the music of the New York City pop-punk art-rock band Hagatha. This version with book and adaptation by E. Ether, music by Rob Susman, and lyrics by Clark Render was an official selection of the 2014 New York Musical Theatre Festival season.

In the American science fiction television series Dollhouse, the antagonist corporation, Rossum Corp., is named after the play.[30]

In the Star Trek episode “Requiem for Methuselah,” the android’s name is Rayna Kapec (an anagram, though not a homophone, of Capek, Čapek without its háček).

In Batman: The Animated Series, the scientist that created the HARDAC machine is named Karl Rossum. HARDAC created mechanical replicants to replace existing humans, with the ultimate goal of replacing all humans. One of the robots is seen driving a car with “RUR” as the license plate number.

In the 1977 Doctor Who serial “The Robots of Death“, the robot servants turn on their human masters under the influence of an individual named Taren Capel.

In the 1995 science fiction series The Outer Limits, in the remake of the “I, Robot” episode from the original 1964 series, the business where the robot Adam Link is built is named “Rossum Hall Robotics.”

In the “Fear of a Bot Planet” episode of the animated science fiction TV series Futurama, the Planet Express crew is ordered to make a delivery on a planet called “Chapek 9” which is inhabited solely by robots.