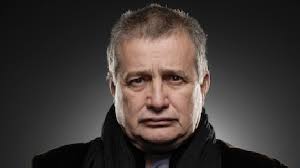 Wednesday, November 13th, the Romanian Cultural Institute from Stockholm (Sweden) held a meeting with the Romanian poet Mircea Dinescu, in dialogue with Inger Johansson, translator and a good connaisseur of the Romanian poet’s work. The cultural evening comprised readings of Dinescu’s lyrics in Romanian (Dinescu) and in Swedish by the Swedish actor Christian Fex.

You feel humble in the presence of a man lager than life. Mircea Dinescu of Romania is such a man, author (of satire, too), revolutionary hero (!), poet, magazine publisher, and much, much more. And now he calls himself a simple farmer.

The evening was lead by the translator Inger Johansson, who interviewed him in Romanian and interpreted the answers into Swedish. Not the easiest task since our friend is a very spontaneous person with lots of jokes and comments – but she did a good job. Later we heard poetry by Dinescu, first read in Swedish – in a very good dictation! – by the actor Christian Fex and then by the poet himself in Romanian, very good too. Ms Johansson set up the evening as a walk-through to pictures of Dinescu’s life and different careers. I’ve been a regular visitor to the Romanian Culture Institute in Stockholm for about five years, a shimmering pearl in our capital’s culture life ! They often run wonderful programmes from all walks of culture (which I also have frequently reported from). But I wonder if they ever have had such stunning evening as when Mircea Dinescu came to visit this dark 13th of November Stockholm night ?

When the Romanian Revolution came to pass in 1989 Dinescu was the leading guy in front of the TV cameras announcing that communism is dead. He had earlier that year been in house arrest for denouncing Ceausescu in a foreign interview. Now he says it was three months of celebrations, and then it all went down the drain. (Romanian domestic post-communism politics hasn’t been exactly heaven of Earth, but it’s complicated.) He shortly thereafter became chairman of the Romanian Authors Guild, but felt miserable in that position – held out for three years though – since he wasn’t an administrator and clerk.
He called it “slow harakiri”. He then went into publishing (at that time he had already authored several poetry collections). In 1990 he founded the satirical Cațavencu Academy (named from a famous historical Romanian satirist’s character) which became a very successful magazine, also leading to offsprings like “Plai(cu)Boi”, a parody of Playboy magazine (the name means something like “The oxen on the plain”).

Just as he criticized the communist regime, he let the new fools in government hear from his sharp pen. His magazine reached sales of 170 000 at the time he sold off his shares and it made him wealthy enough to retreat into farming ! Yes, he is a farmer. He grows wine and produce food and he has founded a cultural centre by the banks of the Danube river, which hosts culinary film festivals! He shows films from Balkan countries and serve food from Greece, Hungary, Bulgaria. A wonderful idea, isn’t it ! Food and film at the same time. (More food later.)
He’s also a singer! He has a CD with one sad Christmas song and the rest romantic, happy songs. And of course he sang – he took the sad Christmas song (“Jesus doesn’t believe in wise men”), with music from a Romanian dissident who was a prisoner the Soviet Gulag system and heard it there.
Over all the evening was full of entertaining pieces from Dinescu. I don’t understand Romanian but first we’d hear the laughs from the part of the audience who does, and after the translation the rest of us could laugh.
The poetry read was very interesting. I’d say it was a mix of satire, philosophy and fun, with titles like “A Drinking Party with Marx” (did you know that *Marx was banned* in Romania in the later part of the Ceausescu dictatorship!) , “A Ridiculous Game of Chess”, “Speech as an Eastern Country Enters Europe”. He is an anti-communist but says he doesn’t want to use that term “because after the revolution it became an occupation to be anti-communist” and that was silly. Suddenly 4 million communist party members had to forget everything and burn their party books. But a lot of them rose to high positions in the New Romania, hardly much less corrupt than before.
He gave us lots of food for thought. And then he gave us food! Wine from his own farm, smoked goose, bread, vegetable salad, half-soft cheeze. He mentioned it was rather difficult to bring in the wine (“almost as if I wanted to smuggle marijuana…”) and claimed it became an issue on government level. “Maybe the Swedish king and queen helped out to solve it…”
The only sad thing is that the goodies evaporated rather fast, because this evening was packed with people (100+ I’d guess), but I managed to get a taste of all. The smoked goose was wonderful and his rosé wine was heaven. I’m usually skeptical to such wine, which doesn’t know if it is red or white – but this rosé the best one I remember having ever tasted. I walked around talking to friends (I know many regulars of the Institute), taking pictures, sometimes hovering around Dinescu (heard him exchange author guild secrets with his Swedish ex counterpart Peter Curman, for instance) and generally having a good time.
Mircea Dinescu is a fascinating person. He once said that “Freedom is the raw material for the artist”, and this seems to be something he has lived by. A reluctant once-politician, famous author, media mogul, entertainer, all rolled into one.
And a farmer.
Read more about him here: http://en.wikipedia.org/wiki/Mircea_Dinescu (but I think the English Wikipedia entry is incomplete, too short, lots of more things could be mentioned).