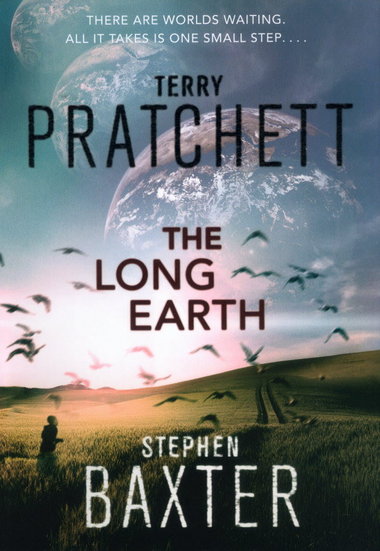 Stephen Baxter is an old favorite of mine. I discovered his writing on uchronia.net – the bibliography of alternate history: ”First to the Moon”, “Prospero One”, “Anti-Ice”, and of course the excellent novel “Voyage” made me follow his work.

I was surprised to learn that he has collaborated on a parallel Earths novel with Terry Pratchett. To me, Pratchett was the prototypical fantasy writer but then I remembered that he managed to write books about economy, politics and whatever else you can think of, all under the disguise of fantasy, and I was less surprised.

Eventually, I got my hands on a second-hand copy of the first book, by then it has become a trilogy, and I just learned that the authors have gotten a contract for three more books.

The title, the cover, and the first few pages quickly reveal the setting – an easy technology made it possible for everyone to travel between worlds. Even this constraint is relaxed further, and the Humanity finds itself facing a nearly infinite number of virgin Earths. Lavish, green, rich, unpolluted. And waiting. Many Americans (the novel is set in the US) remember the glorious past of their nation and set West (“Go West, young man!”). The British, French, Russian and Chinese don’t wait long to follow suit. Words like fresh start, clean start appear a lot.

The Pilgrims were driven to the New World by the religious wars that shook Europe in fifteenth century, and later most waves of migration were politically or economically driven. What can motivate the modern day or the near future pilgrims to leave the comfortable civilized Western world? Pratchett and Baxter come up with some reasons, and the novel’s protagonists sets out on a trek across the new world.

The problem is, it was so logical and predictable, like an emergency plan of the British government in case of an alien invasion on July 4. They did what I (and probably countless other readers) would have done. My second disappointment was that the parallel Earths were mostly empty. Yes, a few humanoids/hominids populate them, but there is hardly anyone to talk to. The only civilization, similar to us was found in ruins, it was long extinct. This was strange, because the neighboring Earths seem to bear similarities (i.e., the gradual climate change, or the gradual increase of the orbital bombardment around the “missing” Earth).

Characters deserve separate criticism. One of them was a borderline arrogant megalomaniac, the two others were loners, with damaging childhoods. I would not mind any of this, and may be found it interesting, if they actually underwent some evolution, but it seems the authors have left this fro the next volumes. To be fair, the Long Earth setting is good for loners – the number of parallel Earths exceeds by far the number of people.

Overall, I was disappointed. The book suffers too much from being written as a first in a series – too much setting up, too many unanswered questions at the end. I haven’t read yet the second and the third book, but I suspect that cutting each to a third and joining them together would improve the story.

This was a surprise to me, because both writers are excellent, and I have liked a lot their other books. I have to add, that I found the short stories of Baxter better than his novel length works (except may be Voyage, but I am biased toward alternative and more successful space programs). The stories that I mentioned above are good examples: “First to the Moon” is character driven, the three British astronauts react to the failure of their mission in rich and convincing ways that speak volumes about their world, more than any book-length description.

To me, the strongest positive point for the book is the grand canvas – the mind boggling infinite chain of Universes, each similar and yet a bit different than the next. And the zeppelin, of course.

Valentin D. Ivanov (born in the town of Burgas, Bulgaria in 1967) is a Bulgarian SF writer, essayist, reviewer and astronomer working in the European Southern Observatory, mainly at the Cerro Paranal site, Chile. Among his primary research areas are the dynamics of star clusters, formation of stars, brown dwarfs, and exoplanets around such objects.

He had obtained his master degree in physics and astronomy at the University of Sofia in 1992. He earned a PhD degree at the University of Arizona, Tucson, Arizona, U.S.A. in 2001. He became a fellow at the European Southern Observatory, Cerro Paranal, Chile and since 2003 he has been a staff astronomer at the European Southern Observatory, Paranal where he is instrument scientist for the wide-field near-infrared camera VIRCAM mounted at the VISTA_(telescope). In 2006, together with Kiril Dobrev, he has published a Science Fiction story collection in Bulgarian.
Valentin Ivanov and Ray Jayawardhana are two of the pioneers of the investigation of the planemos, a special cast of exoplanets. They discovered the first double planemo Oph 162225-240515. This discovery, came just before the debate about the 2006 planet definition, and posed the problem about the distinction between planets and low-mass stars (brown dwarfs).
Some of his English language SF stories, „Crossroads”, „How I saved the World”, „Job Interview” , “Unstable atmospheric circulation”, are online and also some of his reviews http://sffportal.net/author/vivanov/ and essays :