« TEMPUS FUGIT » is the slogan of the fourth edition of Lyon’s Science Fiction Festival, Les Intergalactiques (The Intergalactics).

For the anglophones, “tempus fugit” is a Latin phrase, usually translated into English as “time flies”. The expression comes from line 284 of book 3 of Virgil’s “Georgics”, where it appears as fugit inreparabile tempus: “it escapes, irretrievable time”. The phrase is used in both its Latin and English forms as a proverb that “time’s a-wasting”. “Tempus fugit”, however, is typically employed as an admonition against sloth and procrastination (cf. “carpe diem”) rather than a motto in favor of licentiousness (cf. “gather ye rosebuds while ye may”); the English form is often merely descriptive: “time flies like the wind”, “time flies when you’re having fun”.

That’s why we invite you to the 4th edition of Les Intergalactiques from 21st to 25th of October 2015, to come and explore the mazes of time in literature, cinema and experiments in Lyon!

René Barjavel (January 24, 1911 – November 24, 1985) was a famous French author, journalist and critic who may have been the first to think of the “Grandfather Paradox” in time travel. He was born in Nyons, a town in the Drôme department in southeastern France. He is best known as a science fiction author, whose work often involved the fall of civilisation due to technocratic hubris and the madness of war, but who also favoured themes emphasising the durability of love.

René Barjavel wrote several novels with these themes, such as “Ravage” (translated as Ashes, Ashes), “Le Grand Secret”, “La Nuit des temps” (translated as The Ice People), and “Une rose au paradis”. His writing is poetic, dreamy and sometimes philosophical. Some of his works have their roots in an empirical and poetic questioning of the existence of God (notably “La Faim du tigre”). He was also interested in the environmental heritage which we leave to future generations. Whilst his works are rarely taught in French schools, his books are very popular in France.

Barjavel wrote “Le Voyageur imprudent” (1943/ translated as Future Times Three), the first novel to present the famous “Grandfather Paradox” of time travel: if one goes backwards in time and kills one of their ancestors before he had children, the traveller cannot exist and therefore cannot kill the ancestor.

“Le Voyageur imprudent” (Future Times Three) tells the story of two scientists who invent a substance which if swallowed allows a man to time travel. They travel to the future, where humanity has branched into different species with their own particular tasks. The book was published in English language in 1958, translated by Margaret Sansone Scouten.

The book was adapted into the 1982 film “Le Voyageur imprudent”. The film was directed by Pierre Tchernia and stars Jean-Marc Thibault and Thierry Lhermitte

Barjavel died in 1985 and was buried with his ancestors in Tarendol cemetery, opposite Mount Ventoux in Provence. He used these place names in his books; Mount Ventoux appears as the site of the space base in “Colomb de la lune”, for example, and Tarendol is the name of the hero in the eponymous novel.

The 2015 René Barjavel Award jury, which received 173 new short stories, will give its verdict on Sunday, October 25th, 2015 at 17:30 at the Amphitheater of the MJC Monplaisir, Lyon. 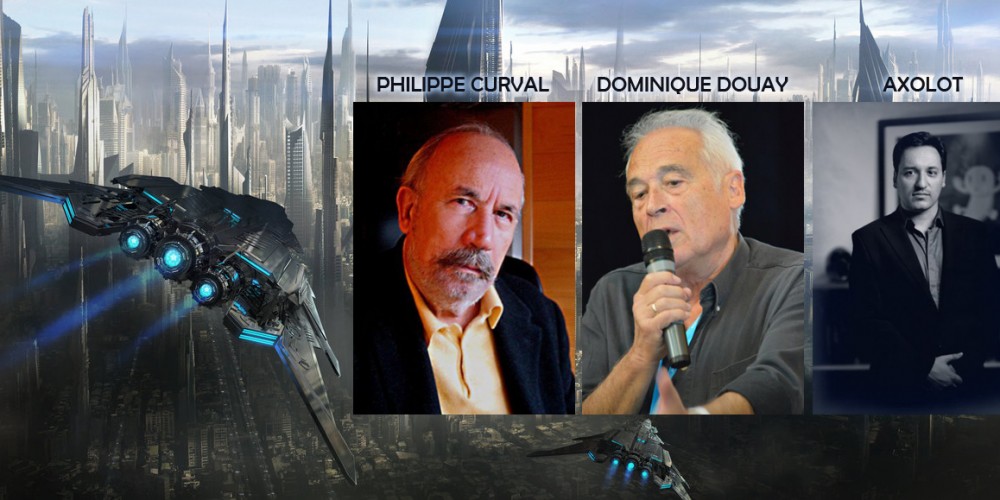 Les Intergalactiques is proposing retrospective cinema screenings, a Short Films Contest, conferences & panels, living the literatures of the imaginary in the company of partners and guests and the Intergalactic Time Traveller Party.