“Ten Years“, the hugely popular dystopian film made in Hong Kong which has raised the ire of the communist authorities and communist media for its depiction of Hong Kong’s social and political future in the year 2025. The film was initially released on December 17th, 2015 and the directors are Jevons Au, Kwun-wai Chow, Ng Ka-Leung, Kwok Zune and  Wong Fei-Pang. The South China Morning Post called it “a reminder of the power of independent, intelligent filmmaking as a vehicle for social and political critique” and “one of the most thought-provoking local films in years.”

A controversial film depicting a bleak future for Hong Kong under communist Beijing’s control has won one of Asia’s top film awards. The low-budget, independent movie “Ten Years“ has packed screenings in Hong Kong, but is banned in mainland communist China.

Set in 2025, it depicts political gangs and persecution of local people for speaking Cantonese not Mandarin. It comes amid increasing nervousness in Hong Kong about Communist Party interference in its affairs.

“Ten Years“, which is made up of five vignettes, won the best film prize at the  held on the 3rd of April 2016. 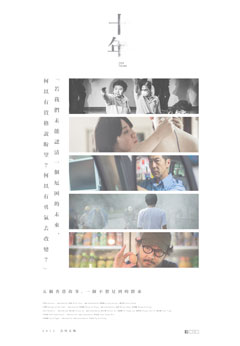 It offers a vision of the semi-autonomous territory in the year 2025, with human rights and freedoms gradually diminishing as the communist dictatorship exerts increasing influence there. Produced on a shoestring budget, the film was a surprise hit, beating out “Star Wars: The Force Awakens” at the Yau Ma Tei cinema where it was first released. It won the Best Film Award at the 35th Hong Kong Film Awards.

Due to its sensitive political themes, mainland communist Chinese authorities censored reports mentioning “Ten Years” except in terms of condemnation. Communist State television channels and major internet sites were prohibited from broadcasting the Hong Kong Film Awards live as the film was nominated for Best Film.

“Made for less than $80,000 with a cast and crew of volunteers, enthusiastic amateurs and film school students, “Ten Years” is a collection of five short films that present a Hong Kong of the future, asking “what if” questions on a number of local issues. A segment called Extras deals with the harassment faced by pro-democratic protestors; Season of the End touches on the loss of identity wrought by the bulldozers of development; Dialect deals with the creeping dominance of Mandarin over Cantonese; Self-Immolator considers whether hard core believers in Hong Kong independence would adopt the extreme act of self-immolation for their cause; and Local Egg tackles censorship.”

The film comprises five short stories set in the year 2025.

Prior to an International Labour Day celebration, government officials concoct a false flag assassination plot to foment public support for legislation of the National Security Law. They hire two petty gangsters to execute the plot: Hairy (Zerisawa Courtney Wu), a middle-aged low-level triad member, and Peter (Peter Chan), an immigrant from India. While the two argue over who should fire the gun, the director of the Liaison Office decides that the leaders of both the TMD and the Fortune Parties are to get shot with real bullets, so as to instigate greater panic in the territory. Misbelieving they will get paid and flee to India afterwards, both Hairy and Peter attempt the assassination but are killed instantly on scene by the police. Later, the government identifies the perpetrators as terrorists and restates the significance of the upcoming legislation.

stated that the triad-like behaviour of the officials was inspired by real-world pro-establishment groups in Hong Kong, who were accused of beating and sexually assaulting pro-democratic protesters during the 2014 Hong Kong protests.

Wong Ching (herself) and Lau Ho-chi (himself) attempt to preserve objects from homes destroyed by bulldozers. The last specimen Lau wants to create is his own body. As the government further enacts law limiting operating areas of non-Mandarin (Putonghua)-speaking taxi drivers, a Cantonese-speaking driver (Leung Kin-ping) finds himself marginalised as he fails to pass the national Mandarin proficiency test. The driver’s wife instructs him to stop using Cantonese with their son, Kongson, so that the boy will do better at his Mandarin medium of instruction school. A series of vignettes further illustrate the increasing dominance of Mandarin and Leung’s struggle adjusting. He is unable to make himself understood by his Mandarin GPS unit and is ridiculed by a passenger for it. Two Mandarin-speaking fares opt to take another cab when they realise he cannot speak the language. One of his passengers, an office lady (Catherine Chau), is fired from her job for failing to clearly explain something to a client in Mandarin.

The film alludes to an 2003 real-world proposal by the Transport Department that failed, as well as a regulation introduced in Wuhan.

In Mainland China, Mandarin (aka Putonghua) is promoted as a national language, and legislation such as the Guangdong National Language Regulations restricts the use of Cantonese and all other varieties of Chinese. The name Dialect comes from the fact that the Mainland government refers to Cantonese as a dialect despite the fact that it is mutually unintelligible with Mandarin.

The short was directed by Jevons Au Man-kit, a graduate of the Hong Kong Academy for Performing Arts, who said that the taxi driver’s plight was influenced by his own struggles to write scripts in Mandarin in an increasingly Mainland-oriented Hong Kong film sector. 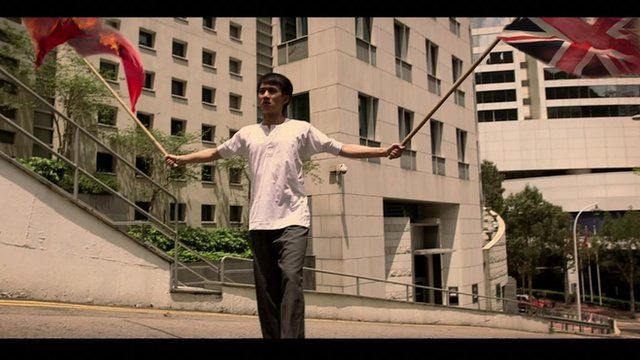 Au-yeung Kin-fung (Ng Siu-hin), a young hardline supporter for Hong Kong independence, becomes the first to be convicted under the National Security Law and dies during a hunger strike in prison. An unknown person commits self-immolation in front of the British Consulate-General in Admiralty. This escalates public concerns about Hong Kong’s undecided future beyond 2047. Au-yeung’s friend Karen (Tanzela Qoser) is initially feared to be the self-immolator but is later revealed to have kidnapped by secret police. Au-yeung’s allies, led by Marco (Neo Yau), break into and set fire to the Central Government Liaison Office in Sai Wan, while a group of Christians gather and pray outside the British Consulate-General to urge the Britons to uphold the Sino-British Joint Declaration co-signed with the Beijing authorities. The Communist Party labels the demand for independence a diplomatic affair, thereby justifying the deployment of the People’s Liberation Army in the city. The protests in Sai Wan and Admiralty are crushed violently. As a flashback reveals, after witnessing Marco being severely beaten by police, an old woman was moved to commit self-immolation outside the British Consulate-General. The film ends on a prolonged shot of her umbrella burning, alluding to the Umbrella Movement.

The storytelling is intertwined by commentators analysing the ongoing events and providing background information such as Hong Kong’s removal from the UN decolonisation list in 1972 at China’s intervention.

Directed by Chow Kwun-wai, “Self-immolator” alludes to the common practice of self-immolation in Mainland China as a form of protest, particularly among Tibetans. Chow stated that while the plot of this piece may seem extreme, “In 2004, people would also find it hard to believe that [the police can drag a protester into a dark corner and beat him up]“, alluding to the beating of Ken Tsang and other incidents of police brutality during the 2014 Hong Kong protests. 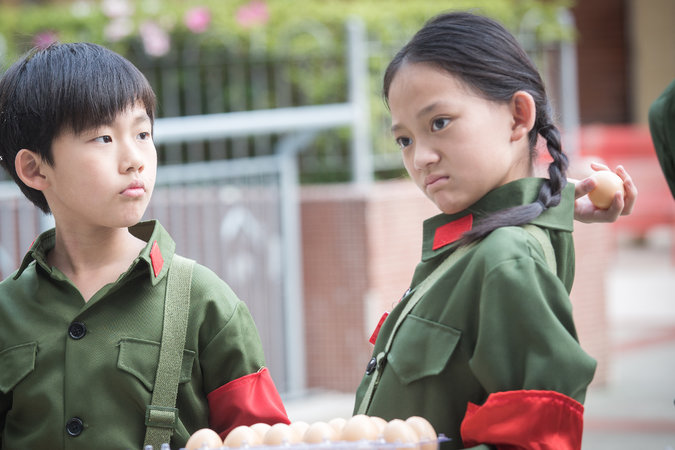 Sam (Liu Kai-chi), a grocery store keeper, is told about the closure of the last chicken farm in Hong Kong. He then visits his egg supplier, farm owner Cheung who recalls the government’s actions to gradually kill off the industry despite the fact that he has been meeting their demands. Sam’s store is frequently checked by Youth Guards, members of a Red Guards-like uniform group, since his use of “local eggs” on his label is on the censor list. He doubts why “local eggs” must be relabeled “Hong Kong eggs” when they refer to the same thing. Sam finds his son Ming among a squad of Youth Guards throwing eggs at a bookstore, but Ming assures his father that he has kept his teaching in mind and has not participated in the vandalism; instead, he often leaks the censor lists and actions to bookstore keepers so that they can remain safe and preserve the books. Relaxed at his son’s critical thinking, Sam reminds a bookstore keeper not to get used to such suppressive acts.

“Ten Years” ends with a quote from the Book of Amos (a prophetic book of the Bible, Amos is one of the Twelve Minor Prophets): 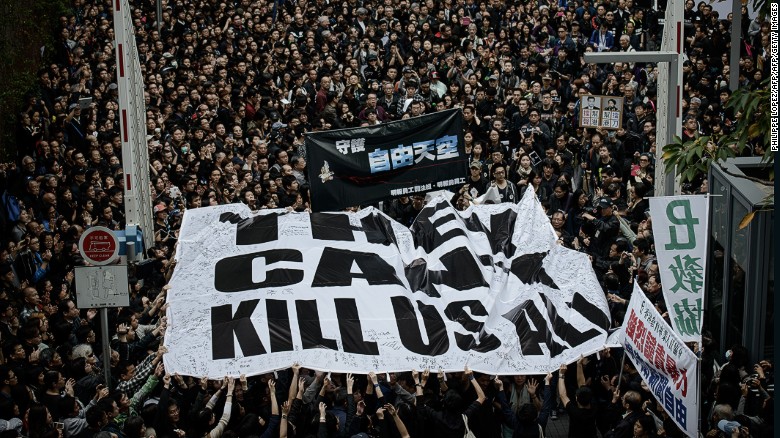 and “Already too late” fading out and replaced by “Not too late“. 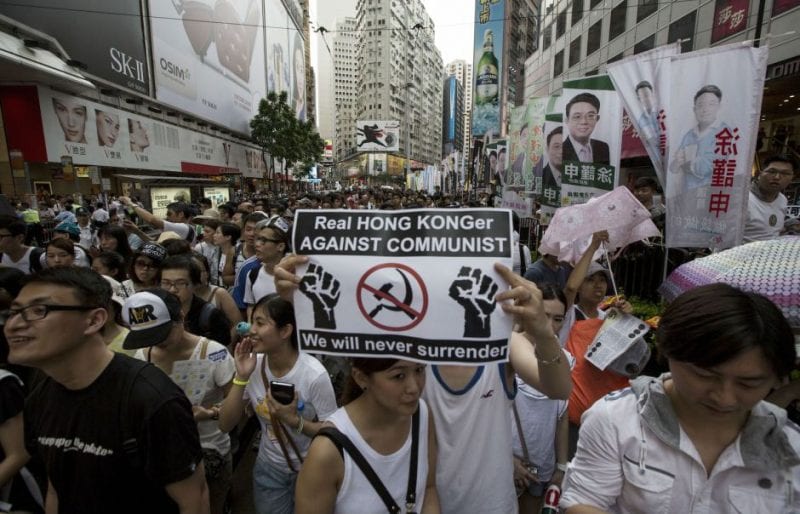