Fun fact: There’s an entire world of science fiction and fantasy existing beyond the horizons of what most English-language genre fans know.

As proof of this, the Czech SF magazine XB-1 is celebrating their 300th issue with their upcoming April 2015 edition.

Followers of my website and social media account have often heard me talking about XB-1 because the magazine publishes a monthly column by me, along with regular translations of my stories. I greatly enjoy working with the XB-1 editors and love the interactions I have with Czech readers and fans. 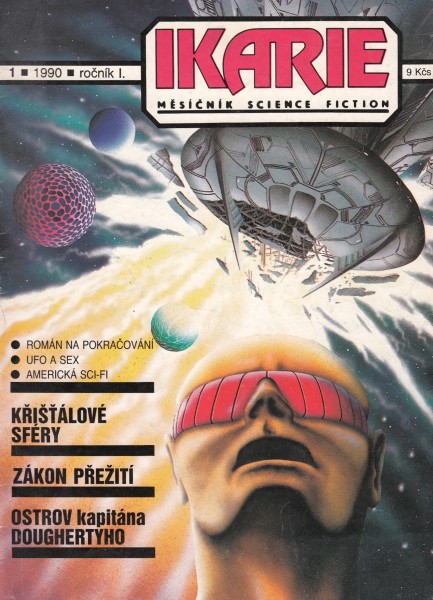 Named after the classic Czech SF film Ikarie XB-1, Ikarie quickly became one of the most important European genre magazines. Published as a 8.25 x 11.5 inch, 64 page monthly (changed to 80 pages in the last volume of 2010) with full-color covers and black and white interiors, Ikarie contained between five or six stories in each issue in addition to reviews and nonfiction articles. Over the years Ikarie published countless Czech authors along with translated stories from the biggest names in world SF.

Unfortunately, the publisher of Ikarie decided to close the magazine after the November 2010 issue. What made this decision even more painful was the closure didn’t reflect poor sales but instead the publisher’s desire to focus on lifestyle magazines.

But as anyone familiar with SF/F fandom knows, the true power in our genre rests with the people who make up the genre. Ikarie editor in chief Vlado Ríša, foreign rights editor Martin Šust,  editor of Czech and Slovak fiction Jaroslav Jiran, and the rest of the magazine’s staff pulled together and found a new publisher. Because of legal issues they couldn’t use the old name, so the reborn magazine became XB-1.

Nearly 5 years later the combined run of XB-1/Ikarie has reached the magical 300, something few genre magazines in the world have ever accomplished.

Above is the cover of the 300th issue, which features the people who helped create and run XB-1/Ikarie. Martin Sust sent me the information below identifying the people who made the magazine possible over the years.

Congratulations to XB-1 on this milestone. And I hope their SF future is as glorious as their SF past.

First row – green bubble – Jaroslav Jiran – current editor of Czech and Slovak works, has been with the magazine since August 1992. He is also a fantasy author.

Second row – yellow bubble – Pavel Kosatík – Worked on Ikarie for the first two issues, in eighties he edited three fanzine anthologies of foreign fiction. Now he is also an author of historical stories and biography books.

Second row – pink bubble  – Jaroslav Olša Jr. – he was the editor of the fanzines Ikarie XB-1, Ikarie XB-2 and Ikarie XB-3 in the eighties (three issues). At the beginning of nineties he edited a couple of anthologies with foreign fiction. He worked on the first five issues of the magazine. After that he was an author of the SF Encyclopedia. He is currently an ambassador for the Czech Republic.

Second row – yellow bubble – Ondřej Neff – one of the most respected Czech SF authors from eighties to the present time. He was the first editor-in-chief of Ikarie, serving from the first issue to August 1993 (39 issues).

Second row – blue bubble – Eva Hauserová – she was first editor of Czech and Slovak fiction in Ikarie for first 26 issues (to July 1992). Today she is a respected author of novels and a well-known feminist.

Second row – brown bubble –  Martin Šust (or Eminem maybe). I was an editor of Ikarie from Sept 2005 to March 2007 and from August 2008 to the current XB-1 issues. BTW, at one time I was an editor of foreign fiction in three Czech SF magazines (Ikarie, Pevnost and Czech edition of F&SF magazine).

Third row – red bubble – Alena Bytomská – secretary from fifth issue in 1990 to June 1999 issue. A good soul of the stuff. She was a political dissident during the eighties under the Communist government.

Third row in the middle – Vlado Ríša – author of many SF/F books and a member of the staff from third issue (1990) until now. Editor in chief from Sept 1993.

Third row – purple bubble – Ivan Adamovič – he was an editor of fanzine in the eighties, and a member of the staff from the first issue (editor of foreign fiction) to Aug 2005 and from April 2005 to July 2008. He is now a respected journalist, editor of anthologies and genre theorist (including being the author of a dictionary of Czech SF/F writers).

Be sure to check out Jason Sanford’s science fiction and fantasy stories at www.jasonsanford.com.

The text was posted on Jason Sanford’s blog (http://www.jasonsanford.com/blog/2015/3/the-300th-issue-of-the-czech-magazine-xb-1ikarie) and reposted on EUROPA SF with Jason’s kind permission. We’re thanking him.

Jason Sanford is the award-winning author of a number of short stories, essays, and articles, and an active member of the Science Fiction and Fantasy Writers of America. Born and raised in the American South, he currently lives in the Midwestern U.S. with his wife and sons. His life’s adventures include work as an archeologist and as a Peace Corps Volunteer.

Jason has published more than a dozen of his short stories in the British SF magazine Interzone, which once devoted a special issue to his fiction. His fiction has also been published in Asimov’s Science Fiction, Analog: Science Fiction and Fact, InterGalactic Medicine Show, Tales of the Unanticipated, The Mississippi Review Online, Diagram, The Beloit Fiction Journal, Pindeldyboz, and other places. Book anthologies containing his stories include Year’s Best SF 14, Bless Your Mechanical Heart, and Beyond the Sun.

A collection of Jason’s short stories, titled Never Never Stories, was published by a small press in 2011.

Jason’s awards and honors include being a finalist for the 2009 Nebula Award for Best Novella, winning both the 2008 and 2009 Interzone Readers’ Polls for best story of the year (and being a co-winner of the 2010 Poll), receiving a Minnesota State Arts Board Fellowship, being nominated for the BSFA Award, and being longlisted for the British Fantasy Award. His stories have also been named to the 2012 and 2013 Locus Recommended Reading Lists along with being translated into a number of languages including Chinese, French, Russian, Polish, Italian and Czech.

Jason co-founded the literary journal storySouth, through which he ran the annual Million Writers Award for best online fiction. His critical essays and book reviews have been published in a number of places including SF Signal, The New York Review of Science Fiction, and The Pedestal Magazine. He also writes a regular column for the Czech SF magazine XB-1.

An interview with Jason Sanford by Cristian Tamas : https://europasf.eu/interview-with-the-american-writer-jason-sanford-cristian-tamas/

Jason Sanford: Do not make stories to be something they’re not

It’s time to call in the universe?

Woman in Black 2: Angel of Death;

The Day After the End of the World; Wer; Flap ! 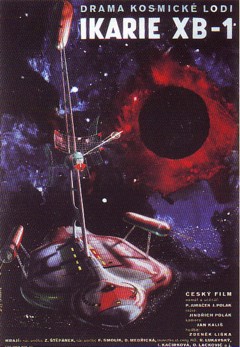 Ikarie XB-1 is a 1963 Czechoslovak science fiction film directed by Jindřich Polák, based on the novel The Magellanic Cloud  by the famous polish SF writer Stanislaw Lem.

Ikarie XB-1 was a hit at the 1963 Trieste Science Fiction Film Festival (Italy) and it is now widely regarded as one of the best Eastern Bloc science fiction films of the era, boasting impressive production design, above-average special effects, a strong ensemble cast and an intelligent screenplay (although much of the subtlety of the original is lost in the English-language version). It was edited and dubbed into English for release in the USA, where it is known by its alternate title, Voyage to the End of the Universe.

Multiple interview with the European Science Fiction Society’s New Board