The Planetary Congress is Association of Space Explorers‘ (ASE) primary forum for professional exchange among U.S., European and international astronauts and cosmonauts. It is designed to promote the exchange of space flight experiences and technical information concerning space operations, scientific research, mission development and astronaut training. ASE members meet to review and discuss developments in their respective space programs, to evaluate existing ASE programs and plan future ASE activities. The week-long Congress affords a unique opportunity for communication between members of the international space community, government agencies and the public.

At its Planetary Congress, the Association of Space Explorers presents its Planetary Award, the Crystal Helmet, to an individual who has made an outstanding contribution to the advancement and understanding of the theme subject of that year’s Congress. ASE also awards Leonov Medallions to honor notables who have contributed greatly to the mission of the Association of Space Explorers. 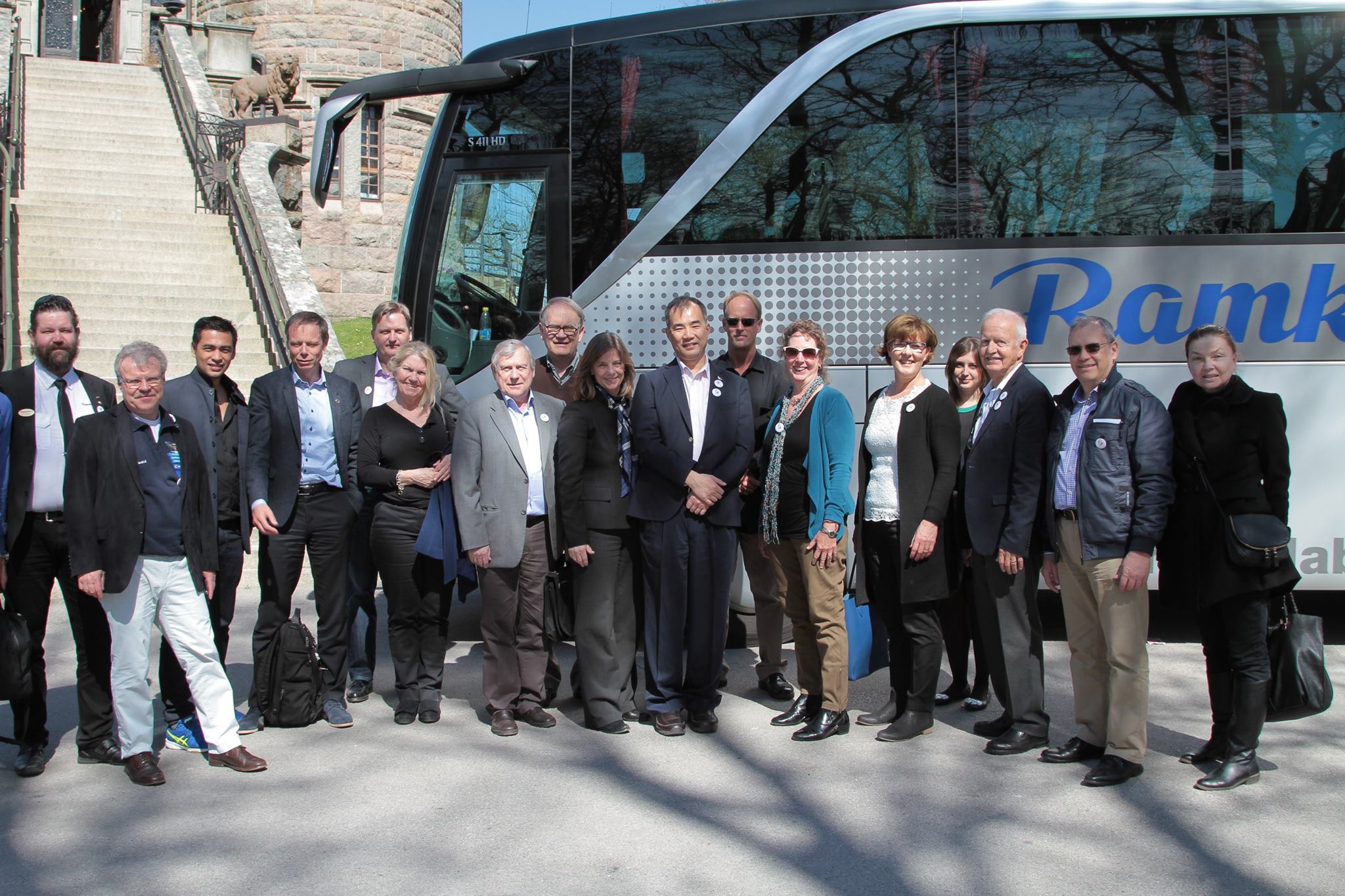 I. Some short words from the opening of the 28th Planetary Congress, as they call it, of the Association of Space Explorers (ASE) which is taking place in Sweden right now, until the 27th of September 2015.

The full program in English is below, including the school visits in the middle of the week, and the sessions which will take place around weekend at the Linnéaus University.

The opening was held in the Stockholm Concert Hall, the Grunewald saloon (near the bigger hall for the Nobel Prize ceremonies) and in the afternoon and tomorrow there will be sessions at the Royal Technical institute (known in Swedish as KTH). I plan to attend, if I can get a seat.

The hall was packed. I believe lots of family members to the 100 astronauts gathered took up many of the chairs.

The full program in English : https://www.ase2015.se/kongressen/openprogramme/

Moderator was the Swedish astronaut and now professor at the Royal Technical Institute, Christer Fuglesang.

And sang some people did.

We had a small group of mucisians from KTH and songs by Gunnar Lundberg (“What a Wonderful World”) and Gunilla Backman (from the “Mamma Mia!” musical; she did “THe Winner Takes it All”). Among speakers we had the ASE president, Japanese astronaut Soichi Nogushi, the Swedish Space Board’s president Peter Gudmundson and the KTH president Peter Gudmundson. I sat next to a professor (Leif Kari) from KTH and Clas Svahn from the Dagens Nyheter newspaper, who I know from before, and sat and took notes like mad on my laptop, and snapping pictures with my lousy mobile. But the pics will be good enough for the web – the Europa SF site I write for will hopefully get a report. (They expressed interest to know what’s happening in Swedish space activities. Sweden hopes to upgrade the northern Esrange research base to launch small polar satellites, there are hopes for a Virgin Galactic “Spaceport Sweden” there, and the government has just announced new space policies, though not radically new. I’ll have to get back to that.)

The Swedish minister for Higher Education and Space, Helene Hellmark Knutsson also spoke, eg about the importance of space to keep an eye on how things are going with Earth’s environment. After a coffee break (where I bumped into Carl Mikael Zetterling, former editor of the Scandinavian SF Association zine who is now working with high-temp curcuits which could be used on Venus), the Canadian astronaut Chris Hadfield held a very inspired speech, about the importance of visions – eg from films like “2001” and books. It makes people want to know more about the universe and pushes our mental frontiers – or something to that effect.

Two women astronauts then talked about their recent missions to ISS, Elena Serova, Russia, and Samantha Cristoforetti, Italy (who btw now is the woman with longest space stay, 200 Days!). They mentioned the beautiful views they had from ISS of our planet, and explained some of the experiments the ISS crew did.

But the most interesting thing this far was professor Anders Ynnerman from Linköping University, who demonstrated his and his group’s space visualisation software. You begin on Earth and then you can zoom out to virtually the edge of known space, with *realtime* data. For example he demonstrated how we in this program could see the latest pictures from Mars and Pluto, and then we could zoom and zoom out, se all the systems with known exoplanets, and the latest rendering of our galaxy super Group, and the background radiation sphere… Very, very impressive. There’s a planetarium dome in Norrköping where you can see this in 3D (with glasses) and I guess that would be absolutely stunning.

I’m off shortly to the afternoon session, “Advances in European Space Exploration”.

…hmm, this became a longer report than I had intended.

II. Been too busy to report more from the astronaut convention since yesterday. And now when the “formal” sessions are over, I’m so full of facts and impressions that things become hard to summarise. The astronauts are now having misc other engagements – dinners, visits (to eg a numer of schools, they’ll also visit the Riksdag, Sweden’s parliament) – and later there’ll be sessions at the Linnaeus University in southern Sweden (if you’re around, go!). This Space Stuff isn’t over for me yet. The Stockholm Culture House has a Space Day tomorrow and I’ll attend a presentation by the Swedish Space Corporation.

Going through my extensive file of notes, I’ll just point out some highligts and a selection of interesting points:

* One of the moderators said this was the biggest gathering of astronauts and cosmonauts EVER, with at least 150 of them present (Another attendee said 200 to me; their Association of Space Explorers have near 400 members). The sessions tended to be packed. Swedish TV was there and others filmed. (Sesssion will probably be available somewhere on the Royal Technical Institute’s homepages.)

* Professor Anders Ynnerman’s demonstration of his real-time universe visualisation system was – as already noted – really spectacular. Already on a flat 2D screen. To see it in their planetarium with 3D glasses would probably make your brain explode!

* Astronaut Chris Hadfield’s inspirational speech truly made many “Inspired by space”, as the theme for this convention was. (However, for me as an old science fiction fan, I’ve been full of this kind of inspiration for decades. I’ve never had any understanding for those who claim space exploration to be just a waste of money and unnecessary toys for boys.)

* The problem with muscle and bone degradation under 0G is almost solved. A new training machine on the ISS, which gives more resistance during the regular work-outs, have together with new diets and medicines worked wonders. However, new problems now studied is that 0G increases salt levels in the body and that many astronauts experience visual degradation. The absolutely biggest problem for future Mars expeditions is, astronaut and phycisian Tom Marshburn said, the Cosmic radiation (ISS is shielded from that orbiting within Earth’s magnetic field).

* I was struck by that the Americans and Russians seemed to get along very well. They all spoke well of each other, appeared on stage together etc. Nothing about the present politically strained situation. But after all, astronauts have always had a tradition of speaking of peace,international cooperation and so on.

* An interesting Swedish Project is making high-temperature integrated Circuits, which works in temps above 500 degrees Celsius. Venus probes, here they come! (My friend Carl-Mikael Z works in that project.)

* The Italian astronaut Lucia Paramitano talked about the drama when he during a spacewalk (a so called EVA) found lots of water leaking into his helmet. It wouldn’t go away and it was very dangeerous – he could theoretically *drown* inside his space suit.

* Bruce McCandless was there and talked at length about how he helped develop and then in 1984 tested NASA’s Manned Manned Maneuvering Unit, which resulted in one of the most famous pictures from our exploration of space (see https://en.wikipedia.org/wiki/Manned_Maneuvering_Unit#/media/File:Astronaut-EVA.jpg ).

* The Grand Old Man of Swedish space exploration, Sven Grahn, who was there to talke about a student micri-satellite project at the Royal Technical Institute, also mentioned how he as a 14 year old attended the 1960 astronautical congress in Stockholm, which was held in the very same hall

However, he didnt mention the 1985 convention in Stockholm – which I attended (see http://www.worldcat.org/title/iaf-85-36th-congress-of-the-international-astronautical-federation-stockholm-sweden-october-7-12-1985-peaceful-space-and-global-problems-of-mankind-preprint/oclc/14065896 ). I was active in the Swedish Space Movement club, which a few years later dissolved after one of the founders became even more freaking mad than he was before.

* Not much was said about Projects like Virgin Galactic. Maybe the astronauts think that going ballistic (100 km) is amateur stuff. The strange Mars One Project (going to Burrough’s Barsoom one way only) wasn’t mentioned either. But Mars itself was discussed many times and my impression is that while no one of the space organisations have set a date, everyone expect a landing in the 2030’s. Going back to the moon, for training and gaining experience, could be expected in the 2020’s. The Chinese may very well do it.

* A lot of the experiments done on the ISS were mentioned, and many of them also have useful applications on Earth. A few examples: 0G studies advances treatment of and medicines for brittle bones among the elderly, capillary flow exxperiments have lead to a chip for detecting AIDS viruses, combustion studies may lead to more efficient fuel use in ordinary cars, Earth observations help getting a grip of the urbanisation wave, space robotics and remote control arms helps develop precision surgery, protein crystallisation gives several new drugs, cryonics help developing better food preservation, and so on, etc, und so weiter.

* I liked the cosmology speech by Dr Katherine Freese. Did you know that the *universe is flat*. New experiments have also shown some indications (vague ones this far, though) of what the 69% of the Dark Matter of the universe is. The best candidates are WIMPs (Weak Interaction Massive Paarticles) or something called axions. Within ten years we will have cracked it, she said. (Cosmology is one of the many odd subjects I have taken university courses in.)

* Alexey Leonov was present, he who in 1965 did the first spacewalk, for which we now celebrate the 50th anniversary – a whole session of the conference covered EVAs (Extra Vehicular Activities) . Someone called astronauts the knights of today – “they put on heavy armor and fight a hostile enviuronment” – and if so, Leonov is certainly King Arthur. He had the honour of closing the last session. He showed a film from the times of the Soviet space program of the 1960’s and talked about his friend Jurij Gagarin. He had problems with his own spacewalk, since his spacesuit expanded in vacuum and he found it difficult to squeeze through the small hole to get back inside. He said that the space suits at that time were more or less experimental. They patched something together and crossed their fingers. He also talked about the dangers of Earth being hit by an asteroid, which we should get our politicians and the UN much more interested in. It’s a grave danger and we’re trampling water there, he said. Leonoc received long rounds of applause.

Much more happened and was said, but that was a few highlights from a couple of very intense and fascinating days. Space IS the place! It gives us new knowledge. It will in the longer run give us new natural resources and energy (eg solar cells in orbit, He3 on the Moon). It gives us spin-offs with many earthside applications. It gives us new mental horizons and most of all, it is simply very, very cool. *

* About 3 degrees above Absolute Zero.

Founded in 1985 by small group of US, Russian and international fliers who met in Cernay, France, the Association of Space Explorers (ASE) is an international nonprofit professional and educational organization of over 395 astronauts and cosmonauts from 36 nations.

ASE activities are conducted under the auspices of several regional chapters:

Oversight is provided by the international Executive Committee and the regional Boards of Directors.

Tags
Planetary Congress of the Association of Space Explorers