„It seems to me that ‘Europe’ is so patently a major subject. We need more art about ‘Europe’, rather than just about individual European nations.  For a long time the view from Britain has been that ‘Europe’ (to which we regard ourselves as, at best, semi-detached) is basically three things: Germany, France and ‘the South’ (Italy, Spain, maybe Greece)”. – Adam Roberts (UK)

This year too, Utopiales, the International Festival of Science Fiction from Nantes (France) organizes The Utopiales European Award (the 6th edition) in order to reward European authors of the genre called “Speculative fiction”.

This award recognizes a novel or a collection published in French language during the literary season preceding the Utopiales Festival and whose author is an European.

The award ceremony will take place on Saturday, November 1st during the 2014 Utopiales SF Festival, from Wednesday the 29th of October to Monday the 3rd of November. 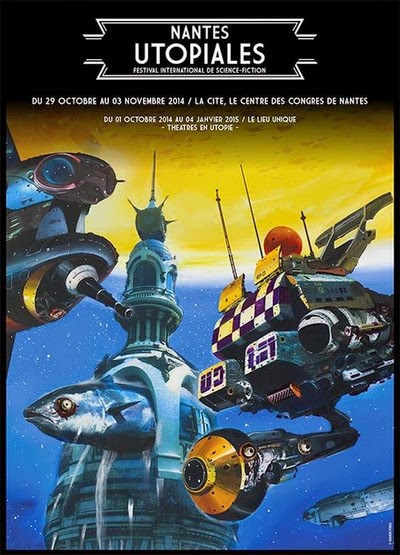 The 2014 Utopiales’ poster illustration was created by Chris Foss, the famous british artist.

Since its creation, in 2000, Utopiales, The Nantes International Science Fiction Festival (France), has tried, as its objective, to offer works of quality to the greatest number of people, and to enable them to discover the world of futurology, of new technologies and of the fantastic. This year the festival will take place from October, 29th to November, 4th, 2014. As every year, it will develop a theme, while at the same time treating the yearly developments in the world of science fiction.

The theme selected for this 14th edition of Utopiales, will be “Other World(s) ?”.