Many, many things are to be released on the russophone market in the month of September 2013. It seems that the phenomenon of “la rentrée littéraire” (the restarting of the literary season) is not unique to France . It was very difficult to make choices within this so rich mass of titles ( and October promises to be stronger !).
However, our attention was drawn to the following titles :

Announced last month by a reissue of the first volume, the cycle “Time of the Chimeras” (Vremya Himery) by Yulia Zonis, continues with “Biohacker” ( Биохакер ) at Ast Publishing House.

Snezhnyy Kom M it’s publishing the novel of Georgian Boris Georgiev (who had received the Encouragement Award at the 2013 Eurocon), “Cosmogone” ( Космогон ), pure SF based on a cosmological intrigue.

Eksmo Publishing House in turn announced a reissue in one volume a duology space opera, “The Empire Above All” ( Империя превыше всего ) by Nik Perumov. In a distant future the 4th Reich rules the galaxy …

Another reissue, still at Eksmo, is the full series of the “Great Ring” by Ivan Yefremov. The founder series of the Soviet and Russian science fiction. The galaxy, if not unified by always too long space travels, is connected thanks to an extensive system of communication ring . The volume contains the novels “The Andromeda Nebula” a.k.a. “Andromeda: A Space-Age Tale” (Russian: Туманность Андромеды/ Tumannost’ Andromedy), “The Bull’s Hour” ( Russian: Час Быка/Chas Byká) and the novellas “Cor Serpentis” (The Heart of the Serpent/Russian: Сердце Змеи) and “Five Paintings” ( to our knowledge not yet translated into French).

Always at Eksmo which decidedly it’s our liking this month , a new novel by Vadim Panov, within its cycle “Mysteries of the city: In the Circle of Time” ( В круге времен ) . Without being revolutionary, Vadim Panov’s novels are always read , especially those of this cycle of urban fantasy, with a lot of pleasure.

Also at Eksmo a massive anthology edited by Viktor Totshinov and Vassili Vladimirsky, “Variations On The End of the World” ( Конец света с вариациями ). The post-apocalyptic genre is particularly popular in Russia, and it deserves to be dedicated a collection worthy of the name. Lots of excellent writers in this volume, Andrey Rubanov, Maria Galina, Dmitry Bykov, Yulia Zonis, Mikhail Uspensky, Dalia Truskinovskaya, Vladimir Arenev and many others. A particularly attractive summary.

And finally, the expected result of a project that we reported already : “The Road to Mars”. Realistic stories of an expedition to Mars, each episode being written by a different author. The project is completed and has now expanded into a book, some of the authors being Sergei Lukianenko, Pavel Amnuel, Alexander Gromov, Dmitri Kolodan, Eduard Guevorkian, etc.

Galaxies SF Magazine No. 27-2014 – Special issue dedicated to Ukrainian SF&F
We are preparing for issue no. 27 of the french SF&F Galaxies magazine, to be published in early 2014 , a large special report dedicated to Ukraine, derived partly from the contacts we made at the 2013 Eurocon. The summary will be particularly rich, starting with a synthesis by Mikhail Nazarenko and Tatiana Kohanovskaya and four novellas, two dating from the Golden Age of Soviet science fiction, and two modern :

We translated the texts of Rossokhovatski and Berdnyk from Ukrainian, while those of Oldie and Arenev were in Russian. And no change will occur, everything will be accompanied by two copious interviews with Vladimir Arenev and Henry Lion Oldie .
The magazine’s cover ilustration belongs to the Kharkov’s artist Vladimir Bondar , who had already created the Galaxies’ covers of “Russia” issue in 2011 and of our anthology “Dimension Russia“. (“The USSR Dimension” ‘s cover is by Alexey Kondakov) 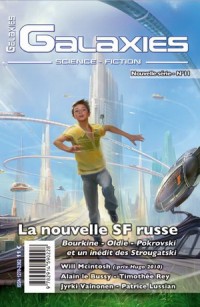 Awarded in Moscow since 2000 by a jury of literary criticists, and launched by the Esli Magazine (it’s also the only award of its kind in Russia, the others being readers’ awards, presented at the conventions), the Filigran Prize was awarded this year to:

In the novel category : “The New Sentinels” (Новый Дозор) by Sergey Lukianenko.

In short-story (povest) category : “Created for you” by Ivan Naumov , published in his short-stories collection, “The Boy with the Sword” ( Мальчик с саблей), 2012, Astrel Publishing House.

Finally, in the novellas’s category : “The Monastery of Petropavlovsk and its Ghosts” by Vladimir Pokrovsky, a story which concluded its recent (and beautiful ) short-stories collection “Flying Through the Sun”, published by Krot.

Another TV series for the Diatchenkos

Yulia Sniguir in “The Seventh Rune”
We announced the upcoming release of the TV series, “World of Darkness : Balance”, written by Marina and Sergey Diachenko which will be available as film and a TV series project. But since last July, another project of the couple went into production, a TV series entitled “The Seventh Rune” ( Седьмая руна ) , directed by Sergey Popov.

The script wants to have a mystical tonality, since the main character is Chistyakov, a secret agent who thinks he can build a better world using the esoteric aspects revealed by the Kaleval , the great Finnish traditional epic. But finally he will wreak havoc and destruction around him. He will find on his way an investigator, a journalist and a student, who will try despite the obstacles build by Chistyakov, to understand it all.
We’re find in the casting, among others, Yulia Sniguir, who played in „The Inhabited Island” by the film director Fyodor Bondarchuk ( another film scripted by Diatchenkos ) .
Some pictures of the TV series and its filming began to be shown on the Russian Internet.

Viktoriya and Patrice Lajoye are two specialists on the rusophone SF&F (russian and ukrainian ones), translators, editors and owners of the Russkaya Fantastika french speaking blog, a remarkable instrument and project dedicated to the analysis of the russian and ukrainian fantastika fiction, an important part of the European SF&F.
Pics © all the mentioned publishing houses, Galaxies, Riviere Blanche