Pyrkon Fantastika and Popular Culture Festival (Pyrkon Festiwal Fantastyki i Kultury Popularnej) is a Polish multigenre pop culture festival, held annually in Poznań the first weekend after the vernal equinox. Pyrkon aims to integrate the fans and the creators and to promote genre in literature, films, TV series and games.

Pyrkon takes place every year in March, at the Poznan International Fair. The festival has come a long way since the days of Fantasy, a convention organized in a friendly school in Poznan Dębiec. Today, Pyrkon expanded its subject, combining the features known from past conventions and contemporary cultural events. 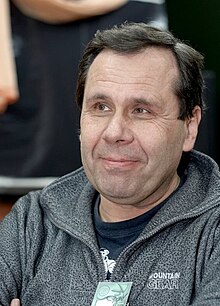 The polish SF writer Marek Huberath (pen name of Hubert Harańczyk) was the Science section’s GoH, as he is a professor of physics in the Jagiellonian University in Kraków.

Pyrkon’s English Section focuses on all issues related to science fiction and fantasy: literature, films and video games. Next to meetings with foreign authors, this Section’s events are held entirely in English.

Literature Section covers almost 150 programme events ? meetings with authors, discussion panels and lectures. A place where fans might meet writers, editors and publishers. The list of guests and speakers will include both world-famous writers as well as promising débutantes. Literature Section at Pyrkon 2015 also hosts new fantastic releases.

If you ever wondered how much truth is there in science-fiction stories, the Science Section is the place for you. We will unravel the secrets of fictional space technologies, discuss ethnology of foreign planets and the recent achievements of modern science.

Pyrkon was held in ten pavilions/halls. The organizers have provided participants with round the clock fun, several blocks of programming, including english speaking programs, movies, literary panels and a literary festival (meetings with authors, lectures and panel discussions on a variety of topics – from the theory of literature, religion, science, philosophy, history, esoterism, to the exploration of space), electronic games, science, concerts,  LARPs, comics, manga and anime, knight fights shows and dance workshops.

What makes Pyrkon an interesting event  ?