“The Wandering Earth” is a People’s Republic of China science fiction film directed by Frant Gwo (aka Guo Fan).

It is based on a story by author Liu Cixin (short story collection from 2000 : “Humanity’s distrust of scientists is the powerful theme of Liu Cixin’s ‘The Wandering Earth.’) and was released on February 5, 2019 (the 2019 Chinese New Year’s Day). 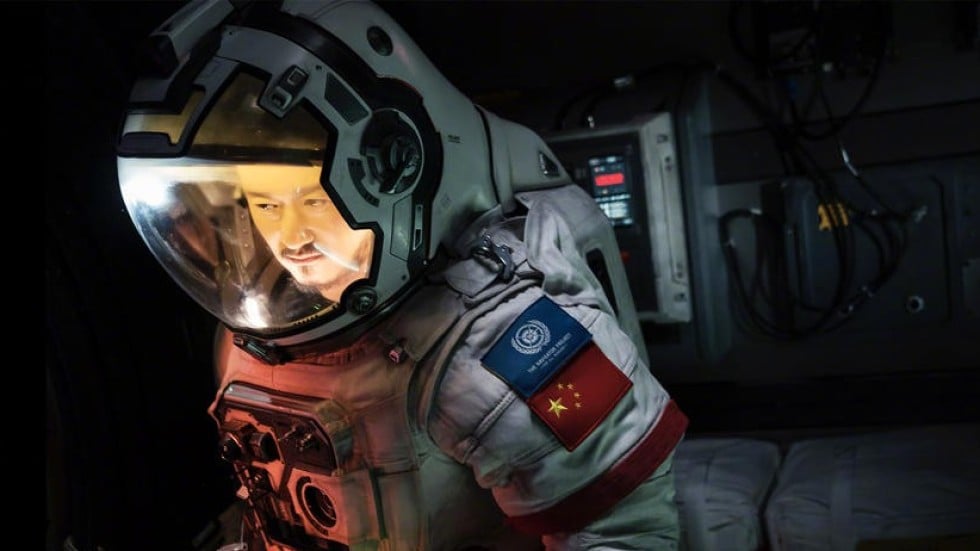 “The People’s Republic of China isn’t typically known for its science fiction blockbusters, but a new trailer for an upcoming film called “The Wandering Earth” has all the hallmarks of a big, Hollywood-style genre movie: it features a dramatic story of the Earth in peril, complete with eye-popping scenes of spaceships escaping Earth.”

“Would be “The Wandering Earth” the People’s Republic of China’s breakout SF blockbuster film?

“The PRC film industry clearly recognized that the story is perfect fodder for a science fiction blockbuster.

The adaptation, directed by Frant Gwo (aka Guo Fan), was released on the 5th of February 2019, and it’ll be PRC’s first big-budget science fiction film. The film’s budget reportedly reached nearly $50 million, modest by Hollywood standards but still significant in the People’s Republic of China. More than 7,000 people were involved in the production.”

“PRC’s studios and investors have hesitated when it comes to the genre because of the perception that they need both a high level of special effects and to rake in lots of money in order to be successful. PRC filmmakers have made some high-profile attempts at the genre, but they’ve stumbled along the way.

An adaptation of Cixin Liu’s “The Three-Body” trilogy was filmed in 2015, only to sit on a shelf because of post-production structure and budgeting problems. And while there have been persistent reports that Amazon wants to adapt the series (for a mind-boggling $1 billion), PRC studio YooZoo says it’s the only rights holder for any potential TV or film production.

“The sun is dying, the people of the world build giant planetary thrusters to move Earth out of the sun’s orbit and to travel to a new star system. However the 2500 year journey will come with unexpected dangers, and in order to save humanity, a group of young people, in the age of the wandering Earth must boldly come forward and fight with determination to ensure the survival of humanity.

The film portrays how a group of intrepid Chinese astronauts save the world from the brink of annihilation due to the imminent destruction of the sun, including an affable Russian cosmonaut who explains why his country prohibited alcohol in space, at least officially. Like Hollywood space movies where Americans are portrayed as the only ones capable of saving humanity, here Chinese astronauts are the sole adventurers among the global space community determined to complete the arduous task of fending off the apocalypse.”

Film Director Frant Gwo invited four scientists from the Chinese Academy of Sciences (CAS) to act as consultants. The film’s three thousand concept maps and more than eight thousand sub-mirrors were elaborately created by a conceptual art team of three hundred people over a period of 15 months.

Principal photography started on May 26, 2017 in Qingdao, a seaside city on north China’s Shandong province, and wrapped on September 27, 2017. Weta Workshop made the film’s highly specialised spacesuits, exoskeletons and weaponry.

The visual effects of the film were made by Base FX (VFX Supervisor: Varun Hadkar), Bottleship VFX, Dexter Studios, Macrograph, More VFX, Pixomondo and Black Nomad.

The film’s IMAX 3D version was made by using the proprietary DMR (Digital Media Remastering) process.

The film’s soundtrack was composed by Roc Chen, famous for composing for “A Bite of China”.

On December 25, 2018, the first official trailer for the film was released at the China Aerospace Museum in Beijing along with a teaser poster.

On January 30, 2019, Beijing-based distributor China Media Capital (CMC Pictures) announced that it has secured the international rights and is planning a sizable North American release on February 8th 2019. The company will open the film in 22 cities in the U.S. and three in Canada, as well as throughout Australia.

“The Witcher” : European Fantasy on Netflix