Parcon (the 33rd edition) is the oldest and historically the most prestigious yearly meeting of the Czech and Slovak fans, the Czecho-Slovak Nat SF Convention.  It was founded in 1982 on the occasion of awarding the first time the Karel Čapek Prize and the first Czech SF Convention in Pardubice, Czechoslovakia.

IstroCON  (Istropolis is a Renaissance scholarly name –  Ιστρόπολις  – greek for Danube City – Bratislava ; the city received its modern name in 1919; beforehand it was mostly known in English by its German name, Pressburg, as it was long dominated by Austrians and German speakers or by the hungarian name Pozsony) is a Slovak Festival of sci-fi, fantasy, horror and games. 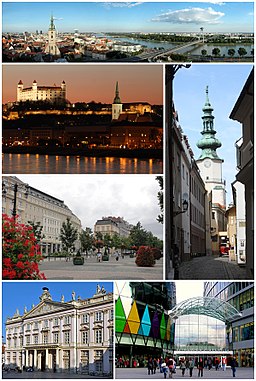 Clockwise from top of left: View of Bratislava from the castle, St. Michael’s Gate in the Old Town, Eurovea shopping complex, Primate’s Palace, Hviezdoslav Square, Bratislava castle and the Danube riverbank at night.

”Nad Tatrou sa blýska” (Lightning Over the Tatras) is the poetic and romantic anthem of Slovakia, an EU member and an Eurozone member.

So, the slovak and czech fans decided to reunite (again) and to organize a Czecho-Slovak or a Slovako-Czech joint SF convention, Parcon-Istrocon or Istrocon-Parcon.

Apart from lectures, discussions, panels and confrences on modern  forms of fiction, many launches and presentations of new books, magazines, audio books and even computer games are scheduled.

Other relevant events are the launching of the Slovak SF anthology of short stories, “Touch the Future” (Dotyky budúcnosti) by Artis Omnis press, the launching of  the issue no.8 of slovak SF magazine “Jupiter” dedicated to the cyberpubunk, the panel on SF&F websites from Czech Republic and Slovakia (with Martin Šust – XB-1, Martin Kralik, Veronika  Inglotová and Alexander Schneider) and of course the ceremony of the awarding of Karel  and Dragon Prizes.