A beautiful but somewhat chilly autumn afternoon (October the 6th) in Stockholm, the multi-cultural magazine Karavan invited us to meet one science-fiction author and one poet from China. Karavan had just published a Chinese issue including – among work by many other Chinese authors – poetry by Hu Dong and an SF short story by Chen Qiufan, both present in the Södra Teatern where the well-attended meeting took place.

A fair number from the local Chinese community was also present, and I saw a couple of friends from the local SFSF society. The meeting lasted three hours and in the following I can only cover bits and pieces of it.

The meeting begun with a discussion between the translators (from Chinese to Swedish) Anna Gustafsson Chen and Göran Sommardal. We learned that it isn’t more difficult to translate from Chinese than any other language, provided you know the language, but there are “traps” in culture and idiom that may be difficult. For example, “to become a nun” just means to move out of your parent’s home, not literally to join a monastery. (Many more examples were given, but I fear finer points will be lost in Chinese translated to Swedish expressed in English…) Most important is of course to know the language you translate to, so you may find a fluent phrasing for something sounding ankward if translated literally.

Chinese poetry (and there is much – every Chinese is a poet !) is difficult. The language easily loans itself to rhymes and rythm, but it’s very Chinese and doesn’t translate well to another language with other structures. You have to partly re-invent the poetry when translating. There are perhaps 300 000 books published in Chinese per year, of which 100 000 are fiction. Of this huge output only the tiniest fraction reaches Sweden and there’s a shortage of translators.

Anna Gustafsson Chen and Göran Sommardal of course do their bit to get more out, suggesting books to be translated to publishers. But interest has increased, especially after the Nobel Prize to Mo Yan.
And then we had readings. Chen Qiufan read the beginning of his short story “The Fishes in Lijang” (from the Karavan issue) in Chinese, as far as I could make out a near-future story involving mind-transfer. It was then re-read in Swedish translation by Kurt Lundstedt (if I got the name right – he did it very well, anyway !). We also got a number of poems, first in Chinese and then in Swedish, by Hu Dong. I noticed his poem “Taking a slow boat to Paris”, dealing with how to reclaim Chinese culture now residing in the West.
Both authors were also interviewed, in English which both speaks well (Dong lives in London and Qiufan has worked for Google, during a period in Dublin), by Anna Gustafsson Chen. Even if she of course could have done it in Chinese, the audience wouldn’t be able to follow.

Hu Dong  was born in 1963 in Chengdu, Sichuan, and during the 1980’s became one of the new generation of creative, “underground” Chinese poets, rough poetry of the avant garde type. Since the 1990’s he lives in a self-imposed exile in London, but continues to write in Chinese. He began with poetry because of his father and read all the classic Chinese poetry, before he turned avant garde as a reaction to the aftermaths of the so called Cultural Revolution.

Chen Qiufan (1981-) is from the province Guangdong but now lives in Peking . He has published one novel and many short stories, often in the Chinese magazine SF World, probably the *biggest* SF mag in the world. His story in Karavan in 2012 won the SF&F Translation Award and he has also won several Chinese awards. (SFE’s entry : http://www.sf-encyclopedia.com/entry/chen_qiufan says more and several of his stories are available in English.)
Quifan began reading SF in a popular science magazine as very young and was so turned on that already in 1st or 2nd grade in school he wrote Space Operas with roaming spaceships and blazing lasers. At the age of 16 he sold his first story to SF World and won an award, with a certificate he could proudly display in school. He likes the escapism of the genre because it may release some tension, but also writes to analyse recent developments in Chinese society which may be done much more freely in fantastic literature – it is after all “only” science fiction, you know. Fantastic literature is growing in China, and even if print publications are struggling, e-publishing seems to be on the rise. He grew up in one of the “special economic zones” which had more cultural exchange. He could find Japanese manga and see TV from Hong-Kong including Star Trek and Star Wars. Though that was his starting point he calls what he writes “SF realism”, reflecting problems of today, like for instance in a story relating to the smog issue in Peking or the problems for students to find jobs.

Dong said many Chinese poets have given up poetry and gone into business life, which pays better, but he keeps writing – important to feel alive – even if he has limited contacts with fellow poets in China. The 1980’s was a spectacular time for Chinese poetry, but things changed after 1989. He says he feels the pressure from politics and that includes language. Chinese is really a collection of local dialects, maybe as far apart as Swedish and German, but with the Mandarine dialect as dominant. Dong doesn’t like Mandarine, it spreads, is a tool for central power and contaminates local language. Much classic Chinese poetry was written in Cantonese. Chinese authorities at one point wanted to ban TV stations from using Cantonese, but it met so much protests the plans had to be abandoned.

He calls China “an Empire” rather than a nation, an amalgamation of cultures. There was a discussion of differences between Chinese dialects (maybe the wrong word?) and I came to think of the European Union, which is similar in this respect (adopting Croatian as the 24th official language, with English being the Mandarine of the EU).
A lot of foreign literature is of course among the 100 000 fiction books published. That includes all the Western bestsellers (Stephen King, Dan Brown, Harry Potter, Stieg Larsson too, I bet), modern classics like Nobel Prize winners and of course old classics. I talked a little with Quifan after the stage interview and he mentioned he had read all the SF classics, like Asimov, Clarke, Verne and he especially liked William Gibson. I asked about censorship and he said he had once experienced having the words “cultural revolution” pulled from a story (but it seems it was self-censorship from the editors). I also asked about the growing Chinese space program, which he is very interested in (I am too) and you know:
Some time in the 2020s a flag may once again be planted on the Moon – with stars, but no stripes.
P.S. : In May I met another Chinese author on a Swedish visit, Yan Lianke, who spoke in a Stockholm bookstore. My report from that meeting is alas in Swedish but here http://www.freelists.org/post/skriva/Mte-med-kinesisk-frfattare (you may try Google translate or something). He has written a rather controversial novel, Dream of Ding Village, about a village heavily hit with AIDS infection due to local government mismanagement.

io9 had posted recently some informations about the chinese SF novels, The Waste Tide by Chen Qiufan and The Hero With Colorful Feathers by Zhao Ruirui :

”The winner of the Best Novel category in this year’s China’s Xingyun (Nebula) Awards is a book that paints a pessimistic, dark view of a corrupt near-future China, The Waste Tide by Chen Qiufan takes place in the 2020s, and depicts a dystopian future China.

Workers in an “economic zone” in Guangdong Province are turned into cyborgs, whose minds and bodies have been altered to make them the perfect manufacturing workers. Meanwhile, a tiny wealthy elite control all of the country’s resources and keep a tight grip on the Internet and other information sources, so nobody can tell what’s going on. The novel depicts the future China as influential on the world stage, but corrupt and unable to pull its people out of poverty internally. It’s hard to imagine that a novel like this would have been published in China 20 years ago — much less win a major award.

The second place prize in the Best Novel category went to Zhao Ruirui, 32, author of Caiyuxia, or The Hero With Colorful Feathers. She’s not only an award-winning science fiction author, she’s also a former member of the Chinese national women’s volleyball team, and an Olympic medalist.
This year’s Xingyun Awards celebrate younger authors, with the top two winners both being in their early 30s.

One of them, author Chen Qiufan, tells the People’s Daily that science fiction appeals to authors who came of age after the 1980s and witnessed a revolution in science in technology.
Says Jiang Xiaoyuan, who chaired the jury that decided the award for the World Chinese Science Fiction Association: “The winners this year are mainly of the post-80s generation. They are our hope for the future.”

“Liu Cixin uses the “three-body problem” of classical mechanics to ask some terrifying questions about human nature and what lies at the core of civilization. The series explores the world of the Trisolarans, a race that is forced to adapt to life in a triple star system, on a planet whose gravity, heat, and orbit are in constant flux. Facing utter extinction, the Trisolarans plan to evacuate and conquer the nearest habitable planet, and finally intercept a message—from Earth.” 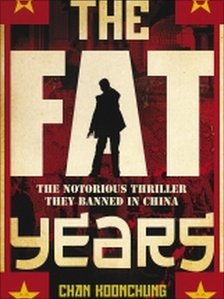 And you should read also Chan Koonchung’s 2011 dystopia The Fat Years (Chinese title ‘Prosperous Age: China in the year 2013’). The Fat Years was first published in Hong Kong and Taiwan in 2009.

and the The City Trilogy by Chang Hsi-kuo (Taiwan)