Johanna Sinisalo (b. 1958) is one of Finland’s most successful and internationally acclaimed authors. Praised by readers and critics alike, she has won several literary prizes, among them the Finlandia Prize in 2000 and the James Tiptree, Jr. Award in 2004. Johanna Sinisalo has been nominated for thePrix Escapades 2012, the Tähtivaeltaja (“Star Traveller”) Award in 2014 and the Nebula Award in 2008. Her works have been translated into 20 languages (English, French, German, Spanish, Swedish, Norwegian, Danish, Lithuanian, Latvian, Czech, Polish and Japanese, among others). 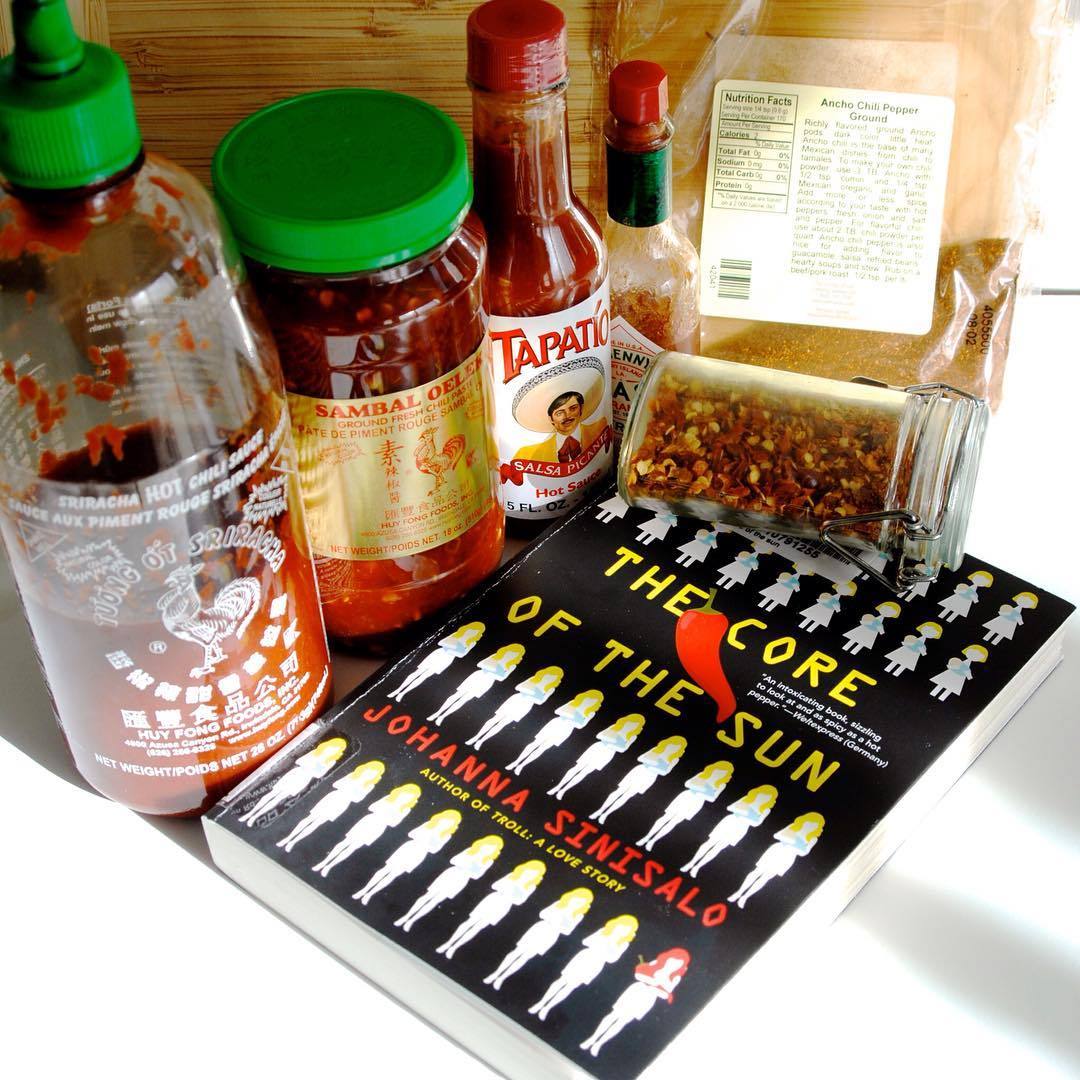 “In her latest novel, The Core of the Sun, Johanna Sinisalo tells the story of The Eusistocratic Republic of Finland in 2017. Her thriller-like story of flight and fight is also between the lines a feisty social polemic. How did Finland turn into the North Korea of Europe?

The Eusistocratic Republic of Finland has prioritized social stability and national health, and outlawed practically everything that might give one pleasure or cause addiction. Well, almost everything: the distribution of sex, an essential commodity of pleasure, is made as efficient as possible. In order to achieve this, the state has bred a new human subspecies: one that is receptive, submissive and always willing. They used to be called women.

Vanna and Jare become involved in buying and selling a stimulant known to be extremely dangerous: chili. Then Jare comes across a strange religious cult in possession of the Core of the Sun, a pungent chili that is too hot to handle.”

“From the queen of “Finnish weird,” a captivating and witty speculative satire of a Handmaid’s Tale–esque welfare state where women are either breeders or outcasts, addicts chase the elusive high of super-hot chili peppers, and one woman is searching for her missing sister.” 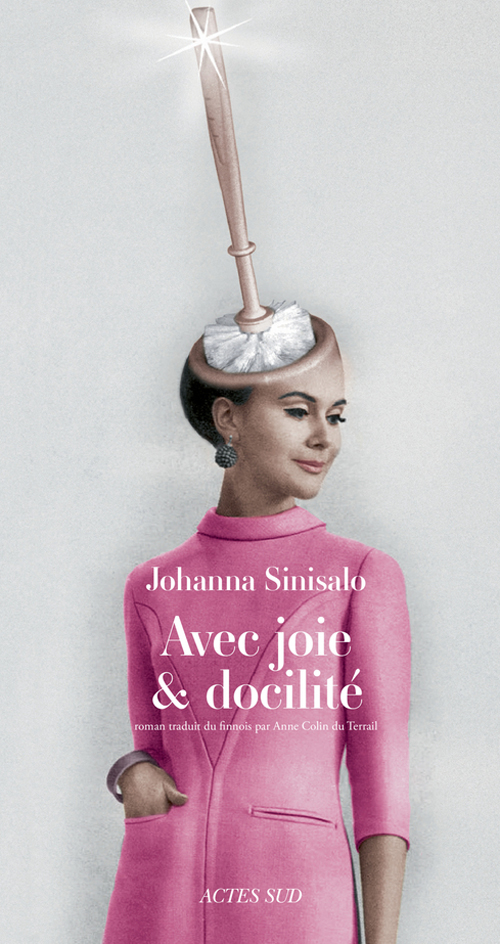 The French publishers have changed the title from “Auringon ydin” (The Core of the Sun) to “With Joy and Docility”, featuring a striking book’s cover image but more appropriate to Ira Levin’s “The Stepford Wives” !

The German publishers have changed the name of the novel to “Finnish Fire” and they understood the role of chile within the plot !

The Czech publishers have respected the original title, Auringon ydin, “Jádro Slunce” is the word by word translation, meaning “The Core of the Sun” !

“The novel is based on earlier versions of the original Iron Sky screenplay, and on the background research conducted by author Johanna Sinisalo, who led the film’s original story team. The novel will be launched simultaneously with the premiere of Iron Sky: The Coming Race in 2017. Renate’s Story is a completely independent world and contains pitch black humor narrating the ways in which its main character, Renate Richter, raised on the National Socialist values of the 1940’s, sees the culture and habits of the Planet Earth.”

“Johanna Sinisalo has a singular, singularly twisted imagination, and The Core of the Sun presents a chilling alternative scenario that has uncomfortable resonances for our own reality – all the while working in brilliantly fun satirical touches.”– Amy Hundley, Grove Atlantic, USA

“Sinisalo creates a world so close, and yet so far, with small, often subtle twists…[The Core of the Sun] is a fun, feminist, political novel – as tasty as a strawberry habanero chilli sauce.”- Deutschlandradio Kultur, Germany

“Johanna’s Sinisalo’s dystopian The Core of the Sun is a stunningly evocative novel about the great literary theme of identity, brilliantly rendering the complex struggle between society’s norms, our innate personal qualities, and the transformative substances of the physical world. Sex, drugs, and bureaucracy: what could be more compelling?” —Robert Olen Butler, author of Hell

“The novel builds a fascinating story centered on gender politics”. – The Washington Post

“Written with wit and grace—Sinisalo describes depression as “a smooth-walled cavity, an open, echoing cave with a darkness living in it deeper than the space between the stars”—the novel maintains an impressive grasp on plot and suspense, easily luring the reader into taking its characters, politics, and striking story to heart.” – Kirkus Starred Review

“Sinisalo harnesses the smooth writing and nicely calibrated pacing that has made her YA fiction popular, but ups the ante with well-placed and eerily fitting facts about the history of science, clever literary narrative, and complex characterization. This tale will appeal to dystopia lovers and fans of darkly offbeat suspense.” – Booklist Starred Review

” — this is an unusual and fun story with a strong dose of social commentary.”  – Publishers Weekly

“Sinisalo’s books can be shelved as literary fiction, science fiction, alternative history, fantasy, or magic realism, but a common factor in all of them is a realistic setting that is then given a twist, an element dropped into the mix that alters the state of things and leads to profound consequences.”– Seattle Review of Books

“Readers who think they’re over the dystopia trend are about to find themselves proven wrong by so-called “queen of Finnish Weird,” – Shelf Awareness

“Sinisalo’s presentation — layers of narrative dominated by Vanna’s, supplemented by Jare’s, and then livened up by interspersing all sorts of sometimes shocking, sometimes amusing odds and ends — is effective and makes for a lively, consistently engaging read”. – Complete review 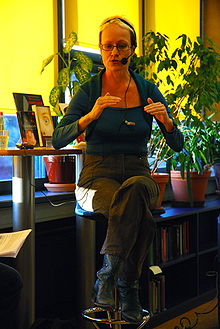 Sinisalo was awarded the prestigious Finlandia Prize for literature in 2000 for her first novel, Ennen päivänlaskua ei voi (translated as Not before sundown in 2003 and again as Troll — A Love Story in 2004 for the American market). The novel has been translated into several languages. Troll was awarded the James Tiptree Jr. Award in 2004. She was also nominated for a Nebula Award in 2009 for her novelette “Baby Doll”.

In addition to editing The Dedalus Book of Finnish Fantasy (2005), Sinisalo has written numerous screenplays for radio and television, as well as worked in movies (Iron Sky, 2012), and been very proactive in the Finnish SF/F scene. Her books have been translated into several languages, English, Swedish, Japanese, French, Latvian, Czech, German, and Polish among others. An avid hiker, Sinisalo’s latest English novelBirdbrain (2010) delves into hiking like Conrad’s Heart of Darkness. Blood of Angels was published in English language in 2014, and the international English rights for Core of the Sun have also been sold.

Her novels have dealt with Kalevala and fame (Sankarit [Heroes], 2003 ), reality-TV (Lasilmä [Glass- eye], 2006), eco-disaster (Enkelten verta[Blood of Angels], 2011) and dystopic patriarchaic society, with gastronomical undertones (Auringon ydin [Core of the Sun], 2013). Sinisalo acknowledges Tove Jansson’s Moomins as the most influential books she read at an early age, with Ursula K. Le Guin and Margaret Atwood as some of her greatest literary heroes.