“The journey of science fiction from niche to mainstream popular culture is to be explored in a major exhibition that will run the gamut from Jules Verne to Godzilla to Star Wars. The Barbican centre in London announced the details of a SF exhibition, which would, it said, be unprecedented in terms of scale and ambition using film, music, literature and visual art to explore the subject across the art centre’s full estate. It will be curated by the sci-fi historian and writer Patrick Gyger, director of “le lieu unique” arts centre in Nantes, France : “It is not an exhibition for fans only; it is aimed at a wide audience and also an art audience.”

One of the most celebrated fields in popular culture, science fiction has seen the creation of some of the most iconic and experimental works in film, literature and art, ever to be produced.

Over the years, scientific and technological discoveries have continued to propel our imagination into new realms; exploring untouched lands, lost worlds, cosmic possibilities and virtual universes.

Into the Unknown will narrate science fiction’s journey through four key chapters: Extraordinary Voyages, Space Odysseys, Brave New Worlds and Final Frontiers; from the 19th century cabinet of curiosities to the vast vistas of space, through future cities and into the inner landscapes of human perception.

The exhibition comprises more than two hundred books from around the world, as well as a comprehensive selection of best-loved film clips, essential items from the genre and a series of newly commissioned contemporary artworks. It will also include major design commissions by leading special effects studios. Alongside a dedicated exhibition catalogue, a series of talks and events will accompany the show, including open-air screenings at the Barbican Sculpture Court and a pop up science fiction event in which the gallery will be turned into an eccentric cinema space to present a night of film, music and emerging technologies.

The exhibition will include pieces from the private collection of Microsoft co-founder Paul Allen, original artworks from films like Godzilla, Stargate and Dark City as well as original manuscripts from iconic authors such as Jules Verne.

Contemporary artists such as Soda_Jerk and Eija-Liisa Ahtila will feature in the show alongside new commissions from designers including Territory Studio, who draw upon their motion graphics work for The Martian (2015). More than 200 books from around the world, as well as iconic film clips, pulps, adverts, comics, posters and robots, will also be on display.

Part of the Barbican’s 2017 Film in Focus programme –a year celebrating the power of the moving image and its influence across the arts –this exhibition will be accompanied by cross-arts shows and events including four science fiction inspired performances from techno-pioneer Jeff Mills; as well as the first Barbican Outdoor Cinema which will screen cult films including Stanley Kubrick’s 2001: A Space Odyssey.

Patrick Gyger, Curator (From 1999 to 2010, he was the director of Maison d’Ailleurs, museum of utopia in Switzerland. In late 2010, Gyger was appointed as the director of Le Lieu unique, French national cultural center in Nantes), said:

“Science fiction is responsible for some of the world’s most iconic film, music, literature and art. Today, the interaction between digital, virtual and physical spheres further blurs the boundaries between it and our current reality. From 19thcentury cabinets of curiosities to cyberpunk, Into the Unknown takes a fresh and at times subversive look at the new territories, lost worlds, cosmic possibilities and virtual universes that traverse the broadest parameters of human imagination and yet are often instantly relatable.”

Neil McConnon, Head of Barbican International Enterprises, said: “Science fiction has enjoyed a fascinating transition from niche to pop culture in recent years but still evokes strong emotions in many. We were keen to develop an exhibition that presents a new take on this broad genre by encompassing a variety of art forms. We hope it will appeal to everyone from science fiction aficionados to sceptics and all those in between.”

Created and produced by Barbican International Enterprises – the team behind the Barbican’s successful Digital Revolution (2014) which attracted 93,000 visitors to the Centre before embarking on an international tour where it was the Tekniska Museet in Stockholm’s most successful show to date (260,000 visitors) – Into the Unknown will showcase works from major collections, national archives, film studios and private collections around the world. These includeParamount Archives, The Ray & Diana Harryhausen Foundation, Warner Bros. Corporate Archive, Weta Workshop and the personal archives of SFX artistPatrick Tatopoulos. It will be brought to life with an immersive exhibition design by Ab Rogers (ARD).

Part of the Barbican’s 2017 Film in Focus programme – a year celebrating the power of the moving image and its influence across the arts – the exhibition will be accompanied by cross-arts programming including four science fiction inspired performances from techno-pioneer Jeff Mills; and the first Barbican Outdoor Cinema, which will screen cult films including Stanley Kubrick’s 2001: A Space Odyssey in the shadow of the Barbican’s dystopian towers. A dedicated exhibition catalogue will also be available.

Co-produced by Brandts – Museum of Art & Visual Culture, Denmark and Onassis Cultural Centre, Greece, the exhibition will subsequently be staged at both venues, before embarking on an international tour. This event is part of:

Into the Unknown: A Journey through Science Fiction is at the Barbican Centre 2 June-1 September 2017. Patrick J. Gyger (b. 1971) is a Swiss historian and writer. From 1999 to 2011, he was the director of “Maison d’Ailleurs” (The House of Elsewhere = The European Museum of Science Fiction) in Switzerland, a museum housing one of the world’s largest collections of science fiction material. He has produced more than thirty exhibitions on the genre and published extensively. Some of his recent research has resulted in a book on flying cars in fact and fiction (Haynes, 2011). In October 2008, he opened Espace Jules Verne, a new permanent wing of Maison d’Ailleurs devoted to Extraordinary Journeys. Gyger was also artistic director of the “Utopiales” Festival International in Nantes, France, from 2001 to 2005. Since January 2011, he has directed le lieu unique, a national centre for contemporary arts in Nantes, a leading multidisciplinary venue for theatre, dance, visuals arts, music and literature.

Conrad Bodman is the Head of International Relationships at the British Film Institute, where he develops film and digital projects. He was previously Guest Curator of Digital Revolution, the Barbican Centre’s first major digital exhibition. Conrad also developed the permanent exhibition Screen Worlds: The Story of Film, Television and Digital Culture at the Australian Centre for the Moving Image (ACMI) where he was Head of Exhibitions.

John Harris Dunning is a London-based writer and curator. He has written for The Guardian and Metro newspapers, and has contributed to numerous magazines. Specialising in comics writing and drawing, John’s work has appeared at the Institute of Contemporary Arts (ICA) as a part of the Comica Festival in 2003. He also curated Comics Unmasked: Art and Anarchy in the UK at the British library in 2014. His graphic novel Salem Brownstone is available in the UK and America.

Paul Gravett is a London-based author, curator and specialist in comic art. He is the author of Manga: 60 Years Of Japanese Comics (2004), co-author ofGraphic Novels: Stories To Change Your Life (2005) and winner of the Locus Award for Best Art Book (2005). Paul Gravett has curated a number of exhibitions on comic art in Britain and across Europe including co-curating Comics Unmasked: Art and Anarchy in the UK at The British Library in 2014.

Yasmin Khan, director of Covalent Creative Partnerships, is a cultural consultant with over 15 years of experience working as a museum professional, focusing on multi-disciplinary projects that reflect the intersections of science, art and identity. Yasmin is also the founder of Sindbad Sci-Fi, a platform dedicated to Arab science fiction, collaborating with a diverse range of artists and authors to deliver participatory festival events.

Louis Savy is the founder and festival director and programmer for the SCI-FI-LONDON Film Festival. Over its 16 years the festival has grown into a credible launchpad for international independent short and feature films. Louis also runs a 48hr film challenge as part of the event and has helped create over 1000 short films, as well as producing several shorts of his own and an award-winning feature film.

Andy Sawyer is a librarian, critic, editor and an active contributor to the scholarship of science fiction. Andy works in Special Collections and Archives, University of Liverpool Library, running the Science Fiction Foundation’s Library. He also directed a Science Fiction Studies Master’s programme for the University’s School of English.

Alyona Sokolnikova is a curator specialising in the history of design. Alyona is the head of exhibitions at the Moscow Design Museum, where she has curated exhibitions including Soviet design 1950-80’s (2012-2013), and Packaging Design. Made In Russia (2013) and British Design: from William Morris to the Digital Revolution (2014). She also teaches at The British Higher School of Art And Design in Moscow. 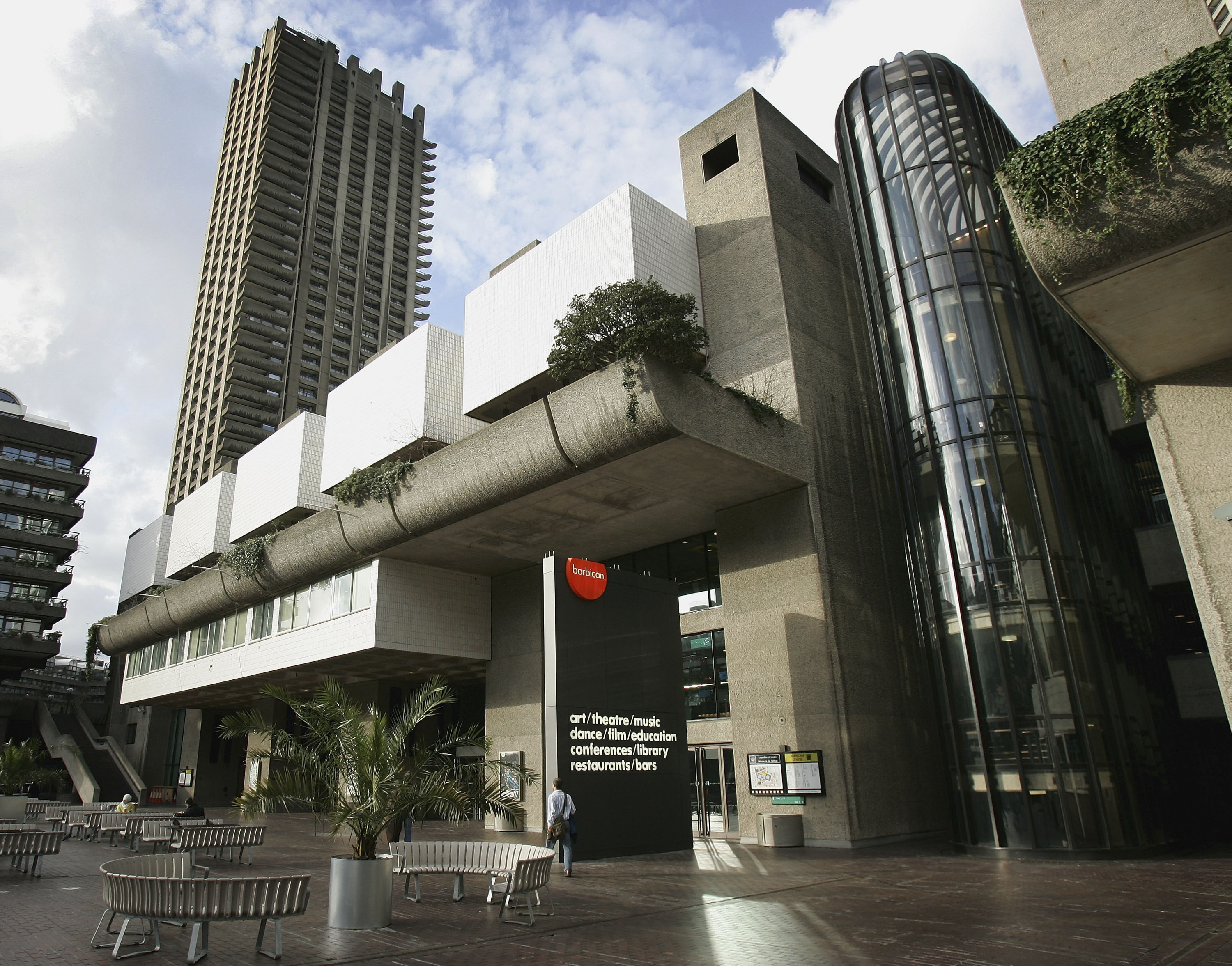 About the Barbican
A world-class arts and learning organisation, theBarbican pushes the boundaries of all major art forms including dance, film, music, theatre and visual arts. Its creative learning programme further underpins everything it does. Over 1.8 million people pass through the Barbican’s doors annually, hundreds of artists and performers are featured and more than 300 staff work onsite. The architecturally renowned centre opened in 1982 and comprises the Barbican Hall, the Barbican Theatre, The Pit, Cinemas One, Two and Three, Barbican Art Gallery, a second gallery The Curve, foyers and public spaces, a library, Lakeside Terrace, a glasshouse conservatory, conference facilities and three restaurants. The City of London Corporation is the founder and principal funder of the Barbican Centre.

Science Fiction: A Journey Into the Unknown (1994) : This documentary is a history and review of science–fiction and fantasy programs on TV.