Cat Rambo was elected on the 1st of July as SFWA’s new Vice-President :

“On July 1st, 2014, the Science Fiction and Fantasy Writers welcome Cat Rambo as the new Vice President and Sarah Pinsker as incoming Director at Large (elected from the Eastern Region*).

About the new Board member:

Cat Rambo is on the road through the end of 2014 and may be coming soon to a city near you.

Her short story, “Five Ways to Fall in Love on Planet Porcelain,” from collection Near + Far, was a 2012 Nebula nominee.

Her editorship of Fantasy Magazine earned her a World Fantasy Award nomination in 2012 and she most recently guest-edited Lightspeed Magazine’s Women Destroying Fantasy issue. She is a graduate of the University of Notre Dame, the Johns Hopkins University, and the Clarion West Writers workshop. Among her accomplishments, she once won a hula contest judged by Neil Gaiman, has ridden an elephant, and is a Maryland-certified Master Gardener. For more about her, as well as links to her blog and fiction, see kittywumpus.net or find her on most social media networks as catrambo.” 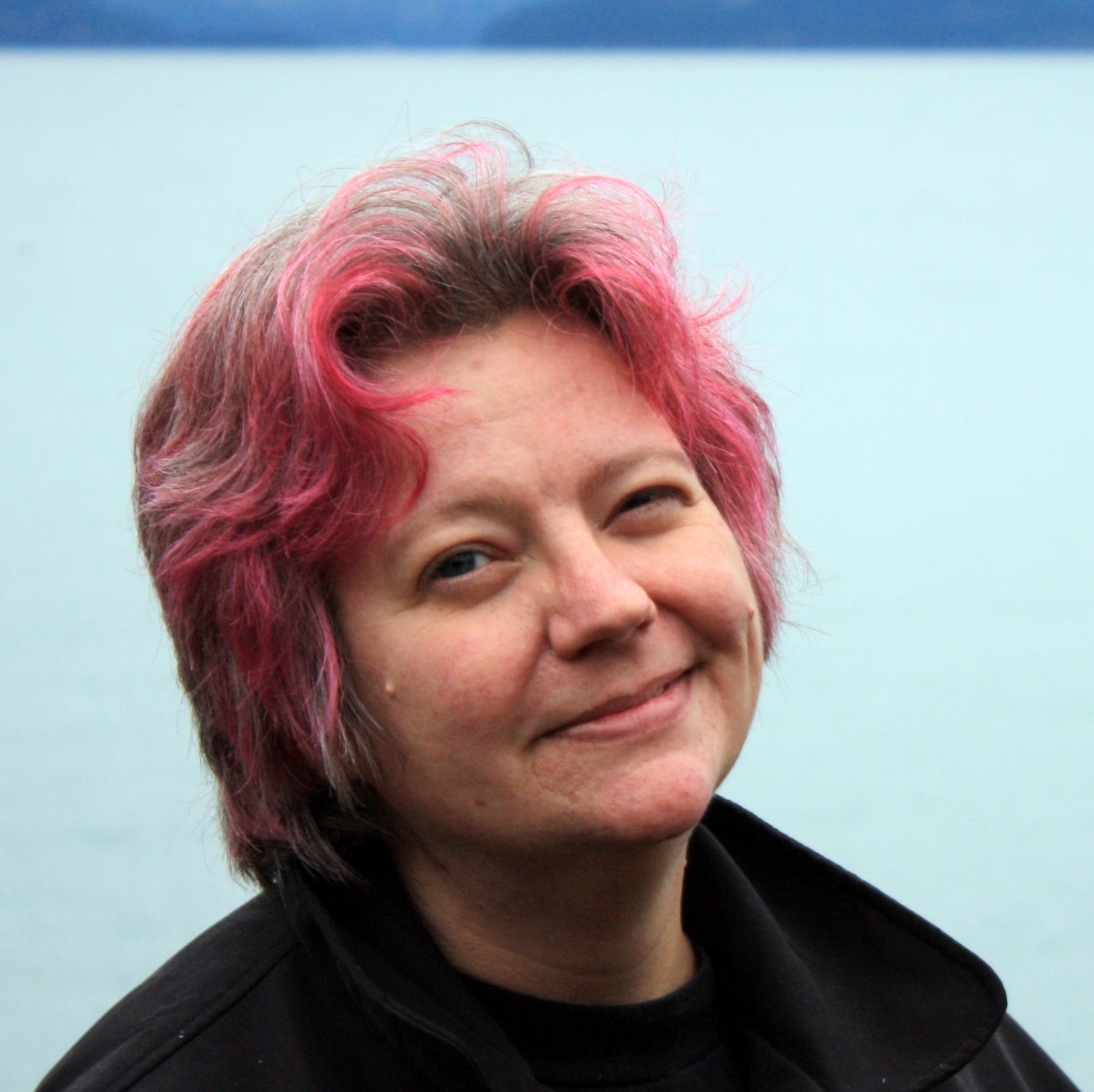 Dear Cat, thank you for accepting this interview ! You’re born in Texas, you grew up in Indiana, you’re living in the Washington state (Pacific Northwest). That’s a real transcontinental experience. How come did you cross America ?

My father is an academic, so his career took him from Texas to Indiana, where he taught at the University of Notre Dame. When I graduated from Notre Dame, I went on to grad school in Baltimore at Johns Hopkins. After that it was pretty much accidents of employment that took me back to Indiana, then to New York, and finally out here to the Pacific Northwest to work for Microsoft.

Why did you choose as a pen name, “Cat Rambo” ?

It’s actually not a pen name, but the result of taking my husband’s name. Cat is short for Catherine, and I married Wayne Rambo in 2001.

Your first published story was „Reminiscences of Planet Crabby” in 1990. You were 27 years old. Afterwards, you had published seven other stories in seven years. And you had stopped for other seven years until 2004 ! Why is that ?

I got sidetracked into working with computers, first in the security field and then writing developer documentation for Microsoft. But at the same time, I had always thought that I’d “be a writer,” particularly since my grandmother had been one. In 2005, I thought about it and realized if I wanted to do that, I needed to get on the ball and work at it.

How and why did you decided to take the Johns Hopkins Writing Seminar and the Clarion West workshop courses ?

My mother made me apply to Hopkins because it was one of the best in the country. I was honored to get accepted there, which gave me a chance to learn from John Barth, Stephen Dixon, and Jean McGarry, among others. I chose to apply to Clarion West because it’s held here in Seattle and the teachers for the year I was looking at were terrific: OctaviaButler, Connie Willis, Andy Duncan, L. Timmel DuChamp, Gordon Van Gelder, and Michael Swanwick.

2007 was the year when you become co-editor of the Fantasy Magazine and the year of your first book publishing (in cooperation with Jeff VanderMeer). A fortunate year, isn’t it ? Please comment !

That was a terrific year! I got lucky, but I think part of that luck was created by working hard at writing and getting submissions out to magazines. Fantasy Magazine had published a story from me that was my fourth or fifth submission, so Sean Wallace knew I was fairly persistent and diligent. Jeff saw that story, “The Dead Girl’s Wedding March,” and asked to read the other stuff I’d had published that year for the Best American Fantasy anthology he was editing.That led to us collaborating on a story that is one of my all-time favorites, “The Surgeon’s Tale,” and then partnering on the collection, “The Surgeon’s Tale and Other Stories”.

Please describe to the EUROPA’s SF readers your responsibilities as editor of the Fantasy Magazine (2007-2011)? Did you liked it?

I loved working with Fantasy Magazine. It was a tremendous pleasure working with both established and new writers, and I’m proud of the many writers who had early publications in Fantasy Magazine, such as Genevieve Valentine and Lavie Tidhar. My responsibilities included selecting and editing stories for the magazine, working to promote it, soliciting and editing non-fiction (and writing some of it, on occasion), and making decisions about artwork and focus.

Last year you had been nominated to the World Fantasy Special Award: Non-Professionalnomination (“Cat Rambo, for Fantasy”). Did you expected it ?

It was utterly unexpected! And delightful. My mother went with me to the convention and had a great time going to the panels and talking to people. It’s always one of my favorite conventions and I was very honored to be on the ballot.

In 2008, you were appointed chairman of the SFWA Copyright Committee. How did you cope with this ?

Copyright was and remains a contentious issue, particularly with electronic publishing changing the playing field right and left. I tried to help people find some common ground as well as working to educate members about copyright.

Why did you donated your archive to the department of Rare Books and Special Collections at Northern Illinois University ? Isn’t it too soon ?

Quite frankly, because I live in an apartment with limited space and they were willing to take the boxes of accumulated paper. My writing process includes multiple hard copy drafts, which ends up taking a lot of space. Nowadays I ship them a couple of boxes each year and that way don’t have to worry about preserving it myself.

When did you became a professional writer ?

It depends on how you define professional! But 2005 was when I started relying primarily on writing for income, which is how I’d define it.

After the beautiful fantasy stories from „The Surgeon’s Tale” and „Eyes Like Sky and Coal and Moonlight” you had decided to write science fiction, too. And your collection „Near+Far” followed !

I’m not sure I understand the question here.

I like science fiction as well as fantasy. I grew up reading heavily in both. One of the interesting things about writing in the field has been a chance to reply to and reference some of the authors that featured heavily in my reading, such as Robert Heinlein, Andre Norton, and Samuel R. Delany.

„Near+Far” collection has a particularity ! Why ?

What are your projects?

I just turned a fantasy novel, “The Moons of Tabat”, in to an agent that has expressed interest. While I’m waiting to hear back about that, I’m working on short stories for several as well as a second novella in the Fathomless Abyss series, which is a sequel to “A Seed Upon the Wind”.

Do you think that the imaginary domain (SF+fantasy+horror) has a future ?

Absolutely ! I think speculative fiction can speak to our psyches in a way that more mundane fiction cannot. It’s capable of moments of extreme beauty as well as psychological depth.

What do you know about the european science fiction&fantasy ?

Not as much as I should ! I read Stanislaw Lem, the Strugatski brothers and Mikhail Bulgakov as a teenager, and when I worked for Fantasy Magazine, I tried to bring in as many international writers as I could. I recently read Ann and Jeff Vandermeer’s Weird compedium, and I’ve been building a reading list out of that, looking for writers that I wanted to find more of. Suggestions are appreciated!

Do you know some european writers science fiction&fantasy ?

Personally? A few, like Aliette de Bodard. In reading, a larger group, but again it’s been shaped primarily by VanderMeer collections and the wonderful Weird Fiction Review.

Kindly address some words to the european fans of science fiction&fantasy?

Please feel free to stop by my blog at http://www.kittywumpus.net and tell me what I should be reading to expand my knowledge of European science fiction & fantasy !

Thank you very much, Cat ! I wish you a lot of succes!

Thank you for asking such interesting questions ! Best, Cat !