The Imaginales, the Festival of the Imaginary Worlds is an event held every year in May since 2002 in Épinal (a small town in northeastern France and the capital  – prefecture – of the Vosges department, on the Moselle river, 312 km east from Paris). The festival is organized by the City of Épinal, have been created and directed by Bernard Visse, and the artistic direction is provided by Stephanie Nicot. 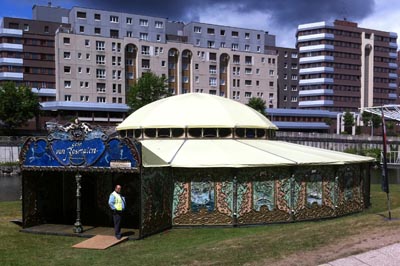 It is a “salon littéraire” devoted to imaginary stories (fantasy, fantastika, anticipation, magical realism, historical fiction, fairy tales and legends). The name “Imaginales” is a contraction of the words “imaginary”, “magic” and “Épinal”.

Imaginales take place in the Parc du Cours, and some initiatives in several parts of the city. Many activities are offered, including literary cafes and roundtables, conferences and debates, exhibitions, films, animations … Signings in the Book Bubble (Bulle du Livre) are, among many other possibilities, opportunities for the public to meet the guest authors.

The Imaginales Awards were established in May 2002. Five awards’ categories are presented at the festival.

The oldest (established at the first festival in 2002) is the Imaginales Award that recognizes the best works of fantasy in various categories. Since 2004 the Claude Seignolle Award deals with folklore, and since 2007 the Another Earth (Une Autre Terre) Award is dedicated to  “a book of anticipation putting a great emphasis on environmental concerns and on the concept of sustainable development”. The Imaginales High School’s Students Award and the Collegians Award are in turn judged by a panel of young readers from the schools and colleges in Lorraine.

• the Best Work for Youth

The permanent jury is composed of:

• Anne Besson, professor at the University of Artois

Since 2006, the entrance to Imaginales is free of charge.

The 2014 Imaginales Award  to be given on Saturday, May 24th, at 19h, within the Magic Mirror Pavilion :

The Imaginales is an ambitious and original concept (exploring all the territories of the imagination), designed to appeal to the widest audience. Cultural exchanges, intelectually passionate meetings, human contacts, friendliness ! Here the tone of the Imaginales !