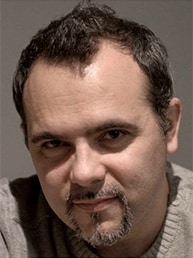 Tonight, Friday, the 11th of September 2015, the italian SF writer and editor Francesco Verso is invited to the RAI4 “Wonderland” TV show (22.55 hours) as Guest to discuss his science fiction works and his publishing project “Future Fiction“.

We give voice to stories from the future and bring them to life across different media, because we believe there are multiple amplifiers for such stories: ebooks, short films, webseries, theatre performances, comics, live installations, video exhibition, 3D printed objects.

Combining these media we tell augmented stories exploring the ambiguous relationship of humans and technologies, the transformation of personal identities and social organizations, the crossroads of humanity dealing with scarcity or abundance of resources: all the visions peering into all possible tomorrows.
As there are many worlds, there are many futures. We believe in each and every one of them and we want to depict them all.” – http://www.futurefiction.org/en/category/catalogue/

Francesco recently received his second Urania Mondadori Award (the most prestigious Italian Award for Speculative Fiction) for his novel “Bloodbusters” and is invited as GoH to the 2015 Utopiales Festival (the biggest world’s SF event held in Nantes, France, between 29th of October and 2nd of November).

“Since its creation, in 2000, Les Utopiales, The Nantes International Science Fiction Festival, has tried, as its objective, to offer works of quality to the greatest number of people, and to enable them to discover the world of futurology, of new technologies and of the fantastic. This year the festival will take place from October, 29th (with an inauguration time) to November, 2th (student day) 2015. As every year, it will develop a theme, while at the same time treating the yearly developments in the science fiction world.

THE THEME SELECTED FOR THIS 16th EDITION, FROM OCTOBER, 29TH TO NOVEMBER 2TH, WILL BE “REALITY (IES)”

Having explored its origins in 2012, and having gave free rein to his passion for the others worlds, in 2013, then having broached the large subject of the intelligence in 2014, The Nantes International Science Fiction Festival sets a new challenge for 2015 and propose you to think about the unity of the reality, by honoring the huge speculative power of science-fiction which, under the guise of imaginary, help to think about reality in its entirely.

Four versions will serve of / as guideline to the different offers proposed to the public:

All these interrogations will be part of the programming of this new edition of our international and multimedia festival. During round tables open to the audience, scientists, authors and artists will exchange their point of views, which are sometimes divergent. Day after day, they create fabulous worlds by using fragments of the real one, to make, beyond the evasion they promise, true “experiences of thinking” which lead us to think more easily about the advent of a new world we unconsciously wished for.

Manchu is the illustrator for the poster this year.

The literary and the scientific fields, fundamental to the festival, will welcome numerous international guests, as many personality who will be present for the conference, debates or autograph sessions, which punctuate the festival. Wandering the alleys of the festival,the public will be able to discover several expositions. The cinema dimension will be also very important with the willing of showing new talents from all around the world. At last, the festival will of course be the occasion to rediscover some role-playing games, video games, programs fo young people and also the Asian pole, with the renewal of the Manga tan day and its Cosplay.”