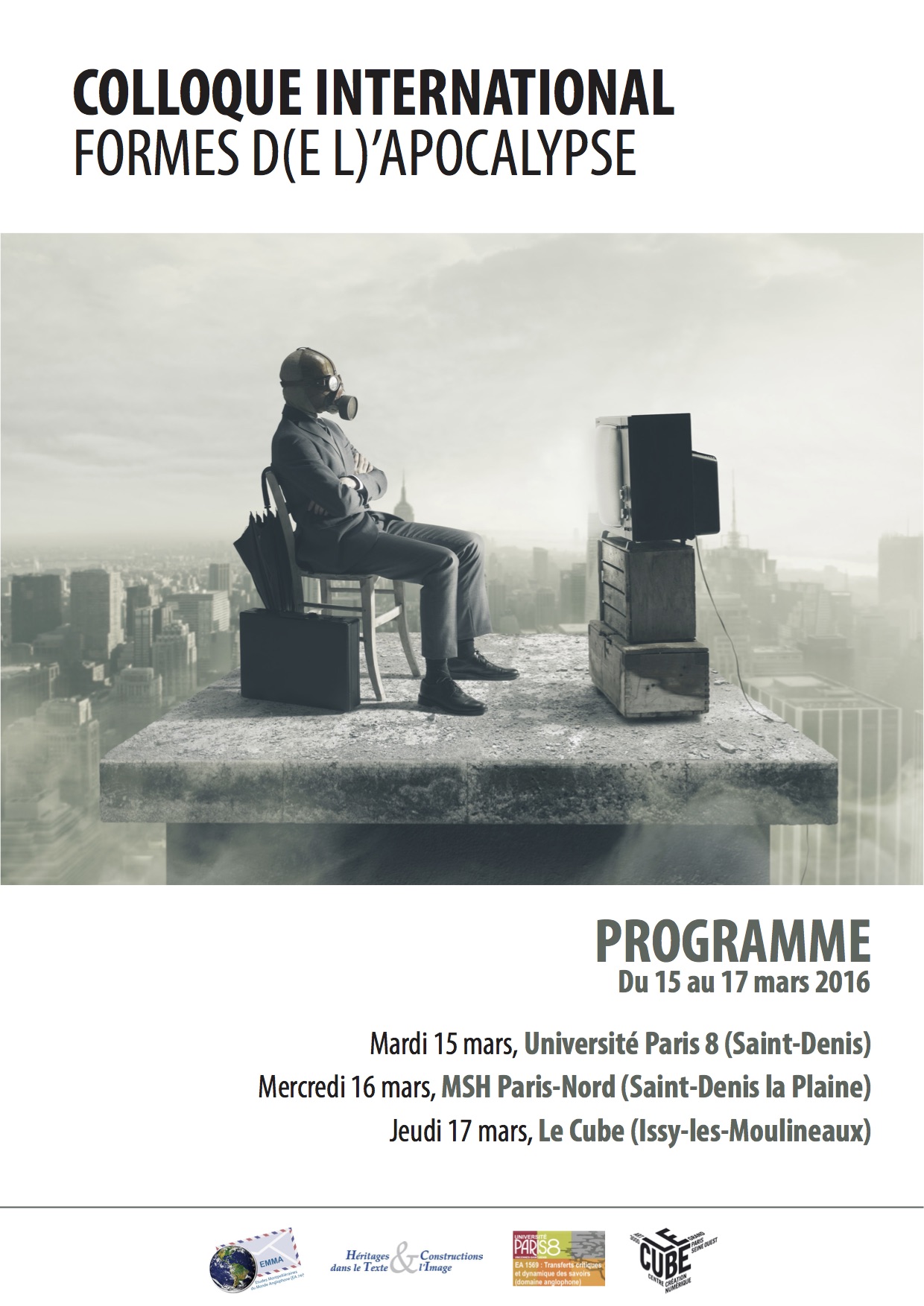 The “Forms of (the) Apocalypse” international symposium is part of a transdisciplinary and pluriannual project. The symposium is taking place between Tuesday, the 15th of March to Thursday, the 17th of March in three different locations, Paris 8 Vincennes Saint-Denis University, MSH Paris-Nord and Le Cube (Issy-les-Moulineaux).

The second opus will take place at Université de Bretagne Occidentale (Western Brittany, France) in 2017. The third and last opus will be held at the university of Montpellier 3 (France) in 2018.

Apocalyptic and post-apocalyptic themes pervade both real-world news and fiction in the early 21st century, within a cultural context dominated by fears that have accompanied human history (religious prophecies of apocalypse and revelation, the fear of plagues that could destroy humanity, the rapture that may leave the Earth only to the godforsaken). 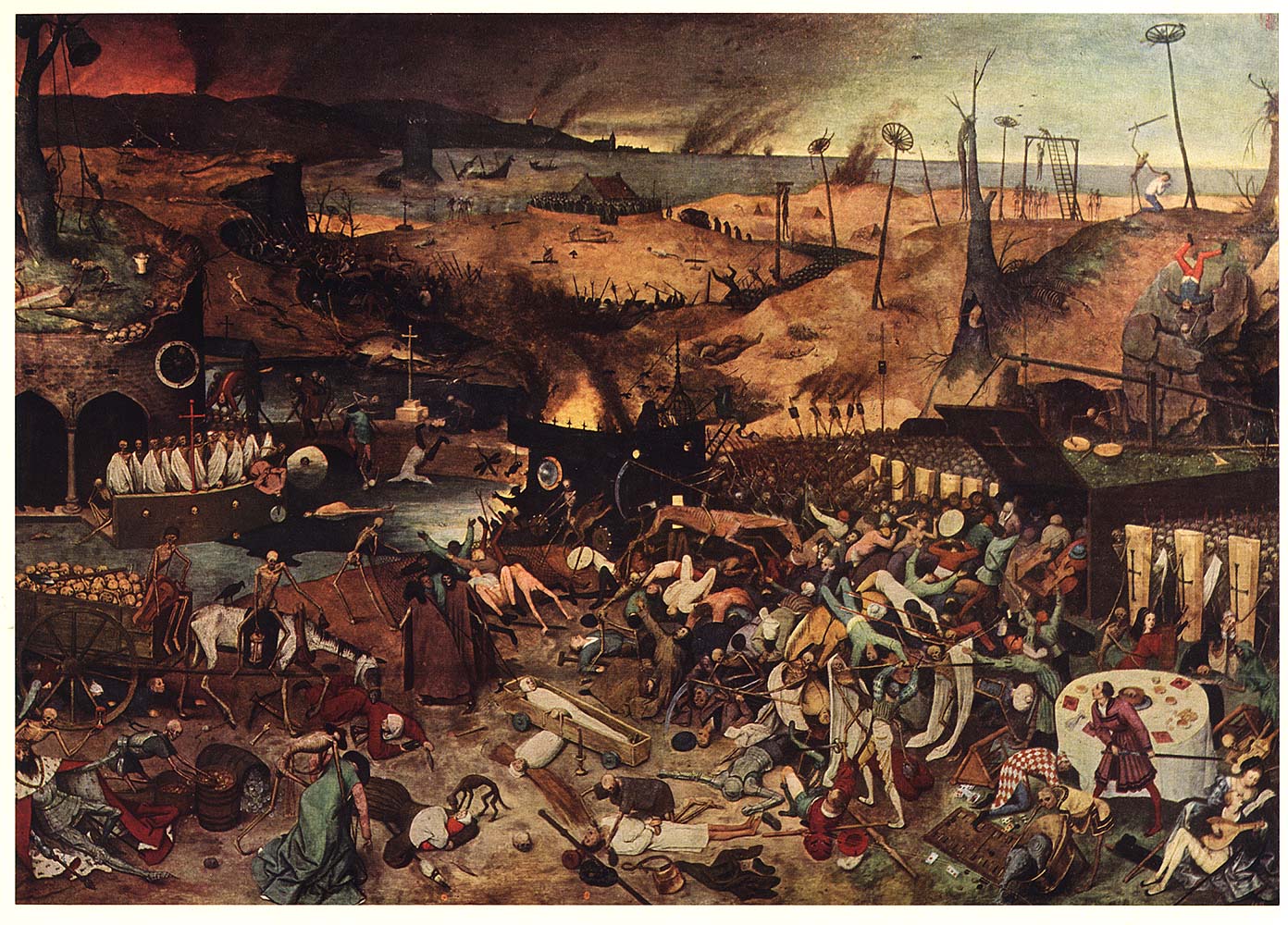 These fears have taken on a new urgency with 20th-century realities (two World Wars ; the nuclear bomb) and turn-of-this-century events (terrors of the Millenium ; 9/11). Meanwhile, rapid technological change, the digital turn, the rise of artificial intelligence, and the sequencing of the human genome have raised numerous possibilities, including that humanity shortly become “posthuman,” perhaps not merely enhanced but immortal, doing away with a perishable body while downloading itself into machines.

What some herald as a transhumanist utopia, others see as absolute dystopia, the extinction of a “natural,” originary man turned into the blasphemous figure of the cyborg.

Numerous works thus explore, in many modes – from the absurd or the satirical, to the dystopian thriller or (heroic) adventure film – what might happen if current “progress” meant either a brutal return to the past (Cloud Atlas, The Road, The Book of Eli, etc), or the disappearance of humankind itself.

The relationship between technoscience and metaphysics in the representation of a world without God, that is the erasure of an eschatological meaning ascribable to the end of the wor(l)d, is further complexified by the impossibility of history since after the catastrophe, be it technological — the nuclear bomb (see Günther Anders) — or cosmic — solar death (Jean-François Lyotard, The Inhuman. Reflections on Time. Geoffrey Bennington and Rachel Bowlby tr., Cambridge, GB : 1991, pp. 8-24) — there will be no one left to historicize, or create an archive of the narratives to come.

In a sense the end-times revealed in Biblical apocalyptic narratives are brought into the present and question what it means to be human. This questioning may unfold as much along radical as along conservative lines (eschatological thought has provided strong arguments in favour of the ordination of women and of gay marriage, for example, in recent ecclesiastical debates).

The metaphysical interrogations of millenarian movements, however, certainly find an echo not only in various forms of contemporary fiction but also in the complex historicization of what appears to be a suspended present, on the verge of an all too imminent end of times (and history), questioning in turn the very notion of time itself and the possibility of a historical/fictional narrative of the end of the world. As Michael Fœssel argues, “‘the world’ designates a transcendence of a residual type”(Michael Fœssel, Après la fin du monde. Critique de la raison apocalyptique, section 2, chapter 6, Paris : Le Seuil, 2012, édition Kindle np.) that will satisfy neither the devout nor the posthuman artists. A paradox remains to be addressed by both fictional and historical narratives : “the end of the world is the horizon of the world itself” (Après la fin du monde, section 2, chapter 4).

Bearing in mind Fredric Jameson’s quip that it is apparently easier for humanity to imagine the end of the world than the end of capitalism, one can question the politics of apocalyptic discourse (fear-based, used to manipulate populations into accepting a given religious message or a political one such as the permanent state of emergency, see Giorgio Agamben, etc).

One can also point out that capitalism does seem to be hastening the end of the world, so that we are living a cultural moment in which the two are indistinguishable (see Naomi Klein’s This Changes Everything, 2014).

While postmodern theory may have been accused of being an “end of history” in itself, Linda Hutcheon has rejected this accusation that postmodernism is, essentially, either a-historical or nihilistic.

One may nevertheless question the ambiguities of apocalyptic and post-apocalyptic texts. Is the onslaught of apocalyptic fiction a sign of our deepest fantasies, first enacted in fiction then coming to life in “real-world” scripts (see Baudrillard on 9/11, or Marc Redfield’s notion of virtual terror in The Rhetoric of Terror) ?

Is the very iterability of the apocalyptic narrative a form of toxic/prophylactic – a pharmacological form of affective and/or prophetic preparation to actual shocks to come (see Richard Grusin’s Premediation : Affect and Mediality after 9/11) ?

Just as video games and simulation flights are used to train soldiers and pilots, are we, as populations, training for the apocalypse rather than changing our societies to avoid it ? Is the recurring and cyclical nature of the apocalyptic as a cultural fear and as a fictional theme something that paradoxically makes the fear itself seem hollow, or are the rewritings, on the contrary, ways of burning into the collective political unconscious the fierce urgency of now ? (quoting Martin Luther King, here, in an entirely different context). 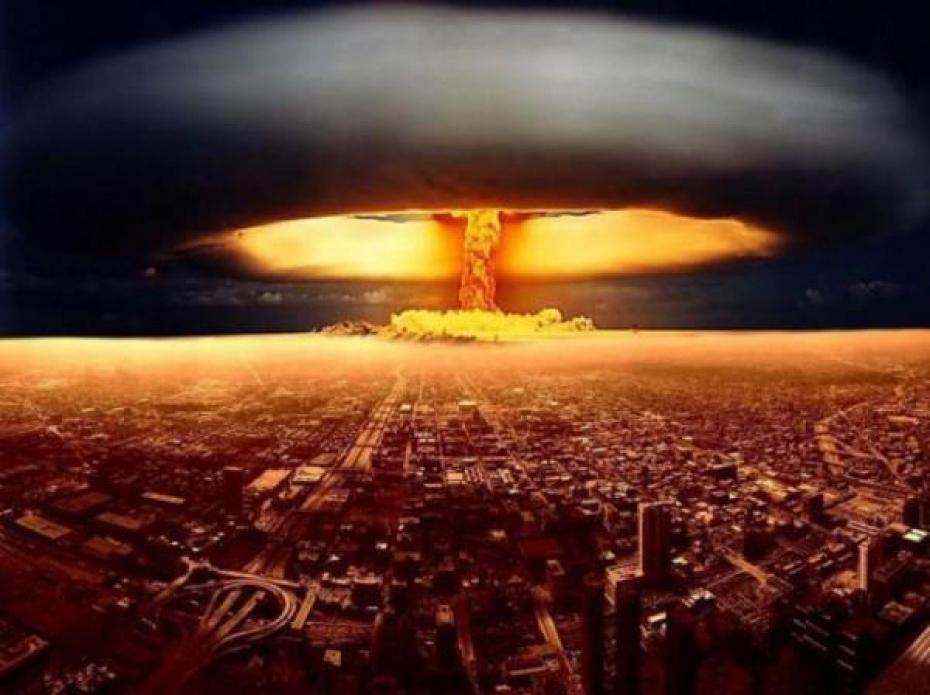 “Forms of (the) Apocalypse” will explore the persistence of archaic apocalyptic fears — or the birth of new ones—, as well as the specific discourses and motifs of the apocalypse carried by literary, filmic, and other works.

Does the theme of the apocalyptic reflexively contaminate language itself (see Cloud Atlas’s garbled language in its post-apocalyptic sections, or hybridized forms of computer code and natural languages in various instances of digital literature and e-poetry) ?

If postmodernity itself is haunted both by forms of apocalypse that have already occurred (World Wars, the Holocaust, Hiroshima…) and by those that are still to come (Derrida), do representations of the apocalypse mimic the workings of trauma – suppression, ellipsis, blankness, and the return of the repressed or locked-out memory in forms of post-traumatic flashes, violent, ‘jumbled,’ chaotic, non-linear narrative or forms ?

Vilèm Flusser’s theories may help us think what may turn out to be a new technological paradigm as “the linearity of history is turned against the circularity of technical images. History advances to be turned into images — posthistory.” (Vilèm Flusser, Into the Universe of Technical Images, Nancy Ann Roth tr., Electronic Mediations, vol. 32, Minneapolis, MN, et Londres, GB : University of Minnesota Press, 2011, p. 57).

In other words, the end of narrativity.

The apocalypse calls up the notion of horizon not only as a teleological end but also as a field of potentialities characterizing the indefinite world that is to end, which involves the delineation of its own form(s). While the genre seems to preclude linear narrative, in-depth characterization and happy ends, a number of post-apocalyptic novels do seem to follow hopeful, if not uplifting scripts – even as others adopt a distanced, absurd, disembodied, black humor take on “after” the catastrophe.

The working languages of the symposium will be French and English.

This international conference welcomes proposals addressing the issue of code from a wide variety of academic fields and art practices.