The Gesellschaft für Fantastikforschung e.V. (GFF) [Association for Research in the Fantastic] is the first academic association in the German-speaking world committed to furthering research on the fantastic in art, literature and culture. GFF was founded in 2010 in Hamburg and strives to broaden scholarly and cultural insight in this area.

GFF is one of the most important research associations on fantastic in art, literature and culture from continental Europe.

Therefore, the association publishes its membership journal “Zeitschrift für Fantastikforschung”  (Research in the Fantastic Journal) twice a year as well as its own book series “Beiträge zur Fantastikforschung” (Contributions to the Research in the Fantastic). In addition, an annual conference provides the opportunity for a membership assembly, taking place in different locations each year.

GFF Board members are :

Chair of the board: Lars Schmeink 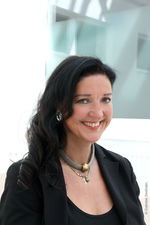 Chair of the board: Prof. Dr. Sabine Coelsch-Foisner

The Annual Conferences of the GFF are regular member meetings of the association and international, bilingual conferences on all aspects of the fantastic.

The official beginning of the GFF 5th annual conference (Fantastic Games. Ludic Imaginary Spaces and Their Socio-Cultural Impact) is Thursday, 11.09.2014 at 2 p.m. with a welcome session and the ending of the conference is on Sunday, 14.09.2014 at 12 noon.

The event is taking place at the Department of English and American Studies of Alpen-Adria-Universität Klagenfurt (Alpen-Adria University of Klagenfurt), Austria.

We’ve noticed the participation of Dr.Pawel Frelik (President of the Science Fiction Research Association, Lublin University, Poland) with the lecture “When Media and Genres Collide – What Do We Talk About When We Talk About Science Fiction Games” and of Prof.Dr.Ana-Maria Tupan (University of Bucharest, Romania)  with the lecture “The Dice-Playing God.”

„In Homo Ludens (1938), his essential and seminal study that is frequently seen as the beginning of Game Studies as we understand them today, Johan Huizinga claimed an ontological connection between culture, as the quintessentially human endeavour, and play. Refuting the constantly raised accusations that play is a futile and escapist activity, Huizinga in contrast attributed it a significant function, both in its metaphorical (i.e. “it is important”), as well as its literal (i.e. “it signifies”) meaning (1971: 1). By its very nature, play opens up spaces and worlds beyond primary, everyday reality, new frameworks of meaning that are, however, not devoid of meaningful interactions with it. Culture, Huizinga argues, needs the free space of play to come into existence in the first place, to change and to adapt.

This intricate and complex web of interconnections between ludic otherworlds and the everyday life of individuals and groups is the core interest of the fifth annual conference of the Gesellschaft für Fantastikforschung e.V. [Association for Research in the Fantastic].

We have deliberately chosen the very open and inclusive phrasing “ludic imaginary spaces” for the objects of the papers, so that the range of media fitting the description is as wide as it can be: hypertext and other ludic forms of text, board- and card games, pen&paper role-playing games, live-action role-playing games (LARPs), video and computer games, alternate reality games, and gamified activities of all kinds are possible, but this list must in no way be seen as exhaustive. No matter the medium chosen, what is essential is that there is this “free space of movement within a more rigid structure” that exists “because of and also despite the more rigid structures of a system ” that Eric Zimmerman has identified as essential to any definition of play (2004: 159). The organisers of this conference also would like to send a strong message that the conflicts over interpretive authority between Ludologists and Narratologists in playable media that have hindered Game Studies since the late 1990s are a thing of the past, so papers suggesting ways to bridge this gap will be especially welcome.

As the second focus of the conference, according to its title, is on the social and cultural exchanges between the secondary, or even tertiary realities created and the primary reality in which they are in turn created, played, and observed, possible approaches to these media reach from the implicit and explicit social and cultural politics of games and playable media on both the content and the structural level, to the regimes of representation and configuration present, the psycho-social phenomena surrounding the experiences created, to the political and social regulation of playful behaviour, and beyond. Game Studies are necessarily “a multidisciplinary field of study and learning with games and related phenomena as its subject matter” according to Frans Mäyrä (2010: 6), so theoretical perspectives from the whole range of academic disciplines and contributions from those working practically in the design and creation of ludic spaces would ideally come together to provide this fifth annual conference of the GFF with a kaleidoscopic overview of the full range of possibilities, problems, and the future potential of games and playable media in negotiating between the realms of the fantastic and everyday life.

As usual for GFF conferences, there will be an additional Open Track for all papers not directly related to the conference topic to safeguard a pluralism of perspectives in our research in the Fantastic.”

Tags
The Gesellschaft für Fantastikforschung e.V. (GFF) [Association for Research in the Fantastic]

The 2016 Festival of the Worlds of the Imaginary (Le Festival des mondes de l’imaginaire) : Montrouge, France