“Alex Garland’s taut, tense directorial debut Ex Machina is many things: it’s a high-concept science fiction story, a claustrophobic thriller, a character-driven chamber play, an exploration of the possibilities of artificial intelligence and a treatise on human consciousness.” 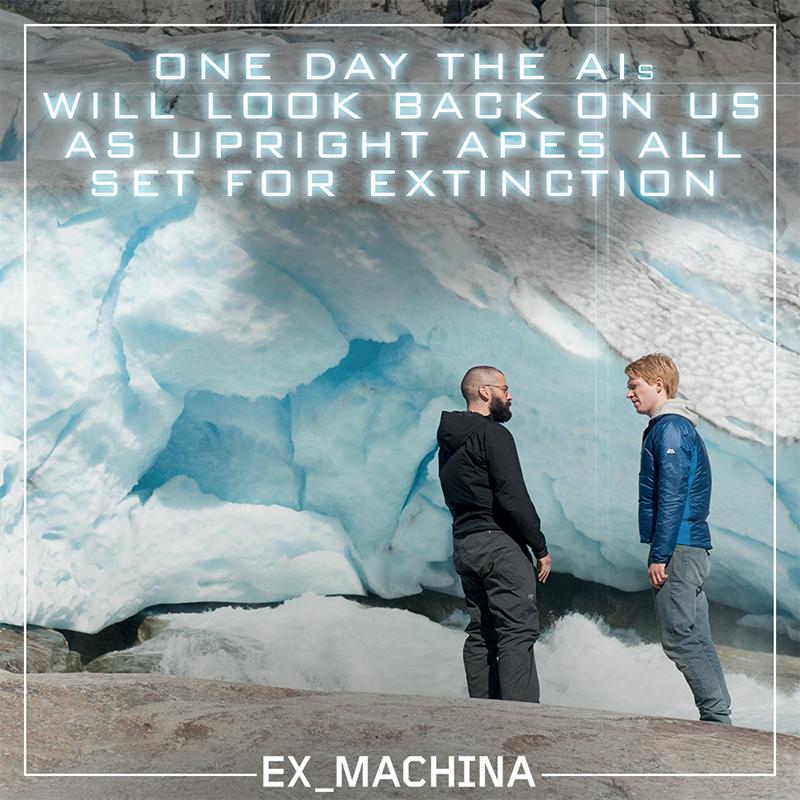 “People are paranoid about AI and robots in general. I approach it from a slightly different angle because I don’t feel paranoid about it. In this film, I’d say, my sympathies lie with the robot. An artificial intelligence in the shape of a thinking robot  it’s around the corner in the same way that a cure for cancer is around the corner. The complexities of the problem only become more manifest as we go deeper into it. I’m pretty sure it will happen, but probably during my children’s lifetime, not next year.” – Alex Garland “Audiences instantly objectify Ava because she has a woman’s face and shape, but she is also a machine. However, I think it’s important to feature sexuality in the film. There is no consciousness in nature that doesn’t involve sexuality in some way, so it should be explored within artificial intelligence.“ – Alicia Vikander

Ex Machina tells the story of a computer coder who wins the chance to spend a week at the house in the mountains belonging to the CEO of the company he works for, only to find he has to participate in an experiment involving a new brand of artificial intelligence.

“A new film, Ex Machina, from the author of The Beach puts two humans on a collision course with a seductive “fembot”. It’s clearly a fantasy, but is the reality far away ?”

“Ex Machina it throws up so many ethical questions of who we are and fundamentally, what our future will be.

“I’m not particularly interested in the AIs that already exist in smartphones and computers, but sentient, self-aware AIs. Artificial intelligence is about consciousness. So a film about it is also a film about us, because we are also our minds. It’s a rich area for a SF thriller.” – Alex Garland

Career : Garland received his BA (History of Art) in 1992 from the University of Manchester. His first novel, The Beach, was published in 1996 and drew on his experiences as a backpacker.

The novel was made into a film in 2000, by Danny Boyle, starring Leonardo DiCaprio.

The Tesseract, Garland’s second novel, was published in 1998. This was also made into a film, starring Jonathan Rhys Meyers.

His third novel, The Coma, was published in 2004 and was illustrated with woodcuts by his father, Nicholas Garland.

In 2005, Garland wrote a script for a film adaptation of Halo; he was paid $1 million. D. B. Weiss and Josh Olson rewrote this during 2006 for a 2008 release, though the film remains in development hell. In 2007, he wrote the screenplay for the SF film Sunshine (2007) – his second screenplay to be directed by Danny Boyle and to star Cillian Murphy. Garland also served as an executive producer on 28 Weeks Later, the sequel to 28 Days Later. He is the co-writer on the video game Enslaved: Odyssey to the West for the PlayStation 3 and Xbox 360.

He wrote the screenplay for the SF film Never Let Me Go, based on the novel by Kazuo Ishiguro. The 2010 film was directed by Marek Romanek.

In 2014 Garland made his directorial debut with Ex Machina,  a feature film based on his own story and screenplay.