This weekend a  new edition of „Étonnants Voyageurs” (Amazing Travellers) is taking place again  in Saint-Malo.

Science Fiction and  Fantasy are well represented with many conferences, panels,  special screenings, book signings and the delivery of the Grand Prix de l’Imaginaire 2015.

Historically, Saint-Malo became notorious as the home of the corsairs, French privateers and sometimes pirates. In the 19th century this “piratical” notoriety was portrayed in Jean Richepin’s play „Le flibustier” and in César Cui’s eponymous opera. The corsairs of Saint-Malo not only forced English ships passing up the Channel to pay tribute, but also brought wealth from further afield. Jacques Cartier, who sailed the Saint Lawrence River and visited the sites of Quebec City and Montréal – and is thus credited as the discoverer of Canada, lived in and sailed from Saint-Malo, as did the first colonists to settle the Falklands – hence the islands’ French name Îles Malouines (inhabitants of Saint-Malo are called Malouins in French), which gave rise to the Spanish name Islas Malvinas (Falkland Islands). 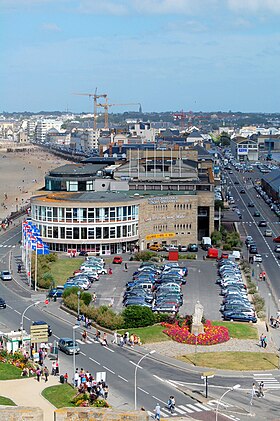 The Festival was created in 1990 by Michel Le Bris, Brigitte Morin, Christian Rolland, Maëtte Chantrel and Jean-Claude Izzo, and attracts about 60,000 visitors annually.

The „Étonnants Voyageurs” name come from a section of a poem by Charles Baudelaire (Le voyage/The trip):

We read in your eyes as deep as the sea !

Show us the caskets of your rich memories,

These wonderful jewels, made of stars and ethers.

Since 1990 the  „Étonnants Voyageurs” Festival explores the Eastern literatures, the Latin american and the African ones. Each year around 200 writers from around the world gather in Saint-Malo for three days of meetings, debates, lectures, literary cafés in twenty five locations in the city.

Since 2008, the festival develops meetings between writers and directors. The film program is developed by Patrice Blanc-Francard since 2009. Maritime adventure is present in every part of the festival since 2008. Since its inception, the festival is the meeting place for photographers and travel writers.

Several prizes are awarded during the festival:

Grand Prix de l’Imaginaire, presented at the festival since 2010;

Prix Ouest-France Étonnants Voyageurs (Western France Amazing Travellers Award), which recognizes a novel written in French and is awarded by a jury of readers aged between 15 to 20;

Finally, an annual short story competition is held, involving college and high school students, on the basis of an incipit created by a famous YA’s author, gives rise to some academic and national awards and to the publication of a collection freely distributed to visitors.

Each year, the festival organizes a Book Fair in Saint-Malo.