I think some comments on Trei Publishing House are appropriate.

Relatively to the new SF book market in Romania, the Collection ‘Epsilon’ imposed almost instantaneously also due to the fact that it has a contiguous history.

More precisely, the coordinator of ‘Epsilon’ is no one else but Mihai-Dan Pavelescu, well-known specialized translator, former coordinator of the above mentioned Collection ‘Nautilus’ (Nemira) and, in fact, one of those ‘name-fronteer’ we so much need in the ‘yard’ of professionalism. 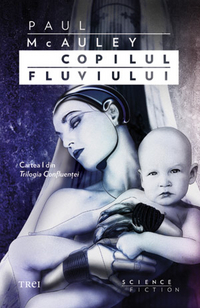 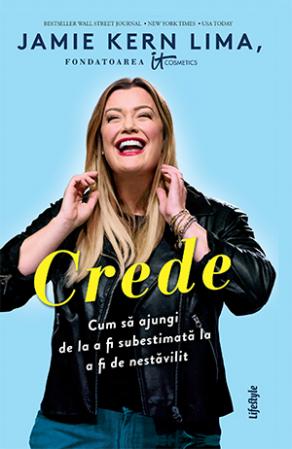 From right to left : “Child of the River”, “Jack Glass”, “The Sparrow”

Now, under the aegis of ‘Epsilon’, the reader can find editions in Romanian from: the 2011 Nebula anthology  (editor Kevin J. Anderson, known for his writings in the universes Dune, Star War, X Files etc.), “The Chronoliths” (by Robert Charles Wilson, considered by Stephen King to be, probably, the best current SF author), “Milennium” (by John Varley, screened in 1989 starring Kris Kristofferson), “The Prefect” (by Alastair Reynolds, details below), “The Sparrow” (by Mary Doria Russell, a book appreciated especially by John Clute), “Eon” (by Greg Bear, author who wrote also in the universe of the Asimov’s Foundation, this book is compared by the critics with “Rendezvous with Rama” by Arthur C. Clarke), “The Lathe of Heaven” (by Ursula K. Le Guin, the author who needs no introduction since Earthsea), the 2012 Nebula anthology,  “World War Z” (by Max Brooks – son of Mel Brooks and Anna Brancroft –, a novel screened in 2013 starring Brad Pitt), “Jack Glass” (by Adam Roberts), the “Dangerous visions” anthology  (editor Harlan Ellison, also known for the advice in the field of creation ensured to the series Babylon 5, among great names in the anthology there are also Robert Bloch, Brian W. Aldiss, Norman Spinrad, Frederick Pohl), the 2013 Nebula anthology. 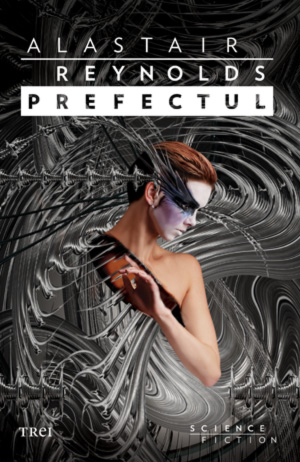 From the titles above, we chose for our column to present “The Prefect” (we have to mention that Alastair Reynolds was translated in Romanian – an excellent volume, “Diamond Dogs, Turquoise Days” – at the Publishing House Nemira, 2008; but on this on another occasion).

The choice was due first of all to the fact that the British author who wrote the book under question is, in my opinion one of the few contemporary writers able to create ‘live’ works such as ‘the classics’’, they were no doubt, to become themselves ‘classic’ (among other high-caliber ‘active’ names, I remind first of all Stephen King, George R.R. Martin, Michael Stackpole, Joe Abercrombie, M. John Harrison and Graham Joyce, now that we lost, for example, Michael Crichton and Robert Holdstock).

The second reason is related to the fact that we deal with a dark SF, many times with neogothic tangents, ‘horror’, Lovecraft style, inciting spatial Odyssey and a humanist-social SF at the same time, with a scientific ‘hard’ core, realistic, based on the author’s education (PhD in astronomy, worked until 2004 for the European Space Agency – Centre of Research and Technology).

Independant novel, “The Prefect” places its action (like in “Diamond Dogs and Turquoise Days”) within the series of Revelation Space, a technologically advanced universe, dominated by different civilizations. The Glitter Band, the basis of the human civilization, is composed of thousands of orbital habitats having in its center the planet Yellowstone. Each habitat (and all together) is an absolute democracy, because all the decisions are taken by the vote of all the citizens – so that even Tyranny can be voted and implemented democratically, in the habitats where they are eager enough to this regard…there is a force of order and inquisition composed of ‘prefects’ of different categories and named generally ‘Panoply’ that is responsible to watch over this absolute democracy.

The action of the book is following more narrative threads destined to meet – and here it must be observed also Reynolds’mastery who, unlike other writers, does not choose to combine the intrigues following a fixed criterium, an objective (‘textbook interchange’, of the type: a chapter dedicated to character ‘X’, a chapter dedicated to  character ‘Y’, then, again, a chapter dedicated to character ‘X’ etc.), but he succeeds the scenes according to the needs of the story (sometimes more chapters ‘go by’ before they come back at a character, sometimes we see the perspective of more characters within the same chapter), in this way it avoids the monotony, as well as the artificial fragmentation of the action.

One of the narrative threads mentioned aims at the prefect Thalia Ng, the daughter of a traitor anathematized by the organization, eager to wash the stained honour of the family or, perhaps, she herself is a traitor, as the reader is going to find out. Initially in a routine mision, Thalia faces something much worse, she is going to fight together with the last survivors of a peaciful habitat, in a desperate attempt to save at least a few lives and to make known precious information to the Panoply.

In another direction of the story, Thalia’s direct superior, the prefect Tom Dreyfus, investigates the total destruction of a habitat, possibly by the ultranauts (human beings who, for a better functionning of their bodies, decided to replace or to improve parts of the body or organs with machineries). Together with his deputy, the hyperpig Sparver (‘hyperpigs’ are pigs modified genetically and humanized, a target of the discriminations because of its origin and features), Dreyfus convinces himself that ultranautes are not behind the genocide, but a much dangerous force decided to take possession of the Glitter Band, using slaughter, treason and terror as main weapons. Things get to evolve badly inside Panoply, especially after Dreyfus receives vital information from the aggregate cannibal prisoner (‘aggregated’ are a group dedicated to mind power and collective intelligence). The information in case lead the prefect not only to a present treason that exposes him to a formidable danger, but also to a bloody past related to an old enemy, a mysterious and cruel entity known as the ‘Clockmaker’…

Finally, a third important storyline (in bookish Poe-’Dowell’ style) is focused on the supreme prefect Jane Aumonier, a victim of the ‘Clockmaker’ years ago, presently prisoner of an artifact made by him and, at the same time, target of the fights for power inside the Panoply. In a case of perfect crisis, the doubt but also the ambition come out the easiest, and the ‘clock’ fixed inevitably on the prefect’s neck started to tick its inexorable outcome…

Stellar conflicts, negotiations, diplomacy, investigation, ‘black’ elements and suspense, ‘technological ghosts’ and rebellious machines, difficult and controversial decisions, duty and honor, indifference and humanism, scientific progress and spiritual downfall – you can find it all in “The Prefect” (stylishly and graphically illustrated by Ionuț Bănuţă). The translation of Mihai-Dan Pavelescu is, as usual, outstanding and the editing is above average. We recommend “The Prefect” as one of the best ‘science fiction’ books now available on the market and expect new ‘Reynolds’ experiences in the future, either from Trei Publishing House or Nemira Publishing House.

Translation from Romanian by Zenovia Popa, MTTLC student (The MA Programme for the Translation of the Contemporary Literary Text).

Republished with the kind permission of the author and of Egophobia Magazine, the original place of publication : http://egophobia.ro/?p=10227 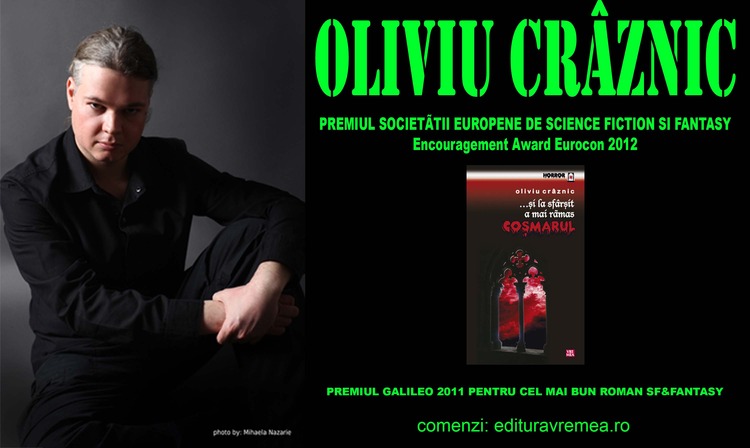 Oliviu Crâznic is a novelist, writer of Gothic, NeoRomanticism, Dark Fantasy and Dark SF tales. Born on 1st of November (Transylvanian Day of the Dead), 1979, in Lupeni (Valley of the Wolves), Transylvania, Romania. The name (Crâznic – real name, not a pen-name) also means “Incubus” in Transylvanian lore.

A legal adviser, his debut novel, “…And Then The Nightmare Came At Last“, is a vampyric gothic/dark fantasy novel which won 3 National Literary Awards (Visul – The Dream – Awards for Best 2010 Novel; Galileo 2011 Awards for Best Science Fiction, Fantasy or Horror Novel published in 2010; and Proliteratura Awards for The Most Interesting Novel in 2011).

The Sci-Fi Fan Blog Team designated the book on the 3rd position for Romanian Book of the Year in Sci-Fi, Fantasy or Horror Literature and on the 4th position for International Fantasy Book of the Year 2010. The book is based on medieval archives, including Inquisition cases. The ebook version for …And Then The Nightmare Came At Last became available in 2012 and can be purchased from elefant.ro.

“Last Hourglass” was designated by Bookblog Reader’s Choice as being one of the Ten Stories To Take With You On A Deserted Island in 2011 and also was a finalist for Galileo Awards 2012 (came 2nd on the Top for Best Romanian Science-Fiction Short Story Published in 2011) and for RoCon (Romanian National SF Convention) Awards 2012.

Both anthologies “Steampunk The Second Revolution” and “Red Alert In Romanian Short Literature”, wherein Oliviu Craznic has stories (“Last Hourglass“/”Ellen Lee“) were among the Books Of The Year in 2011, according to The Sci-Fi Fan Blog: “Steampunk” on the 2nd position as one of the Best Millennium Books published in 2011, and “Red Alert” representing Herg Benet Publishing House in the top.

The anthology includes also his prequel to his own Nightmare novel, a story entitled “Beneath The Charron Palace“. He received the 3rd position of Helion 2012 National Sci Fi Awards with his dark sf story “Domini Canes“.

He is also the author of “Galileo Library No. 2”, an e-book including both “Last Hourglass” and “Then The Arising Bleeding Moon…” Stories (Millennium Books, 2012). In “Galileo Science Fiction and Fantasy No. 5”, he published an extended article about Gothic literature, and in “Almanahul Anticipaţia 2013”, he published a short steampunk story “Anna Lise“.

In 2013 Oliviu Crâznic published a short study of Dark Fantasy and also a dark fantasy novellette, “Lenore Arras“, in “CPSF no. 3” (“Speculative Fiction Short Stories Collection Magazine”), a planetary romance in “Argos Science Fiction&Fantasy no. 1”, “Edana Rose” (“The Ermengaarde Saga Series”), a gothic horror short story, “Return To Death“, in the anthology “Zombies-A Book Of The Living Dead” (Millennium Books Publishing House), a book review in the US dark literature magazine “Cover Of Darkness” no. 14. Along with Ciprian Mitoceanu, Craznic also published a collection of fantasy short stories.

…AND THEN THE NIGHTMARE CAME AT LAST (…ŞI LA SFÂRŞIT A MAI RĂMAS COŞMARUL) – a novel, Vremea Publishing House, 2010

Short stories in magazines and anthologies: