Some stories are published, and some fans exist (and some fans write), but mostly Danish science fiction fans read foreign science fiction books. And by foreign we mean English language books. Only VERY few fans will read German or French authors, even less Russian, Spanish, Italian – unless these are translated into English first. Maybe 50 foreign titles appear in Danish during a year, most will be juveniles, and a large majority will be Fantasy – and most of us will have read the books already the year before in their English edition … 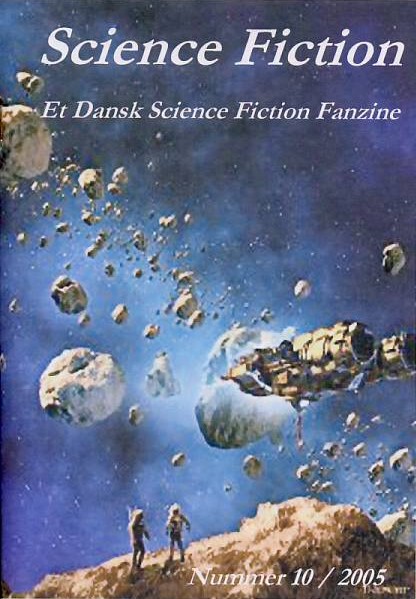 So: What happens here in Denmark for science fiction fans, our “Fanmark” as we call it, comes from fannish activity. The Danish fanbase (that we know of, and meet at festivals, etc) come to some 150-200 fans in total. Most of these will be a member of most (or indeed all !) of the Danish fangroups.

The oldest is Science Fiction Cirklen (SFC), an organisation founded by fans for fans in 1974. Still very active, SFC publishes between 4 and 8 books per year with mostly translations into Danish of notable foreign science fiction. Once every year SFC hosts a short story competition for an anthology, and occasionally SFC will publish new research into the genre in book form.

SFC also publishes PROXIMA twice a year, a 100+ page critical magazine, with articles, reviews, and bibliographic information about the genre.

And SFC publish their memberzine, NOVUM, four times per year with diverse news and fannish content. Both magazines publish new Danish science fiction in every issue. On the yearly relaxacon, DanCon, the national get-together for Danish science fiction fans, critics, fans and writers will discuss the genre. More informal are the 8-10 yearly fanmeetings in Copenhagen. SFC has just about 100 members, and focusses primarily on written science fiction.

Fantastik is another society of fans in Denmark. Established in 2003, they host the yearly Fantasticon-festival – a more internationally oriented festival with international guests. As with the society, the festival looks more broadly at the genre, including Horror and all kinds of Fantasy in their focus. And with emphasis on all manifestations of these genres, whether in books, comics, movies, etc.

Fantastik publishes a memberzine, HIMMELSKIBET (Sky Ship), 4 times a year, with reviews, articles and new Danish fiction, and hosts fanmeetings every other week in Copenhagen. Fantastik also has just around 100 members.

Trekkies.dk is in some accounts the largest Danish fangroup with almost 600 members, all fans of Star Trek, but very few turn up for events that Trekkies.dk are organizing. Still, the large number enables them to publish a slick member magazine, SUBSPACE, 4 times a year, with all the fannish content one expects from a mediamagazine. The annual Holodeck event draws about 50 people, and the yearly National Championship in Star Trek knowledge about the same. No short stories are written by this group (that I know of), not even fanfiction.

Apart from these very stable groups, there are some Tolkien fans, some Star Wars fans, and a large number of unorganized Harry Potter fans. Here we do get fanfiction, though only online, and (after 5 years, and with help from the Hans Christian Andersen Award) the Potter-fans have even succeeded in bringing J. K. Rowling over for a Potter-festival in Odense this autumn.

A few fanzines are being published, very irregularily, and a handful of blogs exist, most of them discussing new foreign stories, either from the original editions, or from the few that make it into a Danish translation, but as the occational original Danish story appear, they will draw attention to it (it is always an event when a new Danish science fiction story are published). Fantasticon is the national Danish science fiction convention since 2004 and is held at various locations in Copenhagen.

Fantasticon 2015 was held at Valby Kino in Copenhagen on Saturday 30th and Sunday 31st of May.

Reposted by courtesy of SFF Portal. Thank you ! “Himmelskibet” (Excelsior / A Trip to Mars / Das Himmelschiff) is a 1918 Danish film of Holger-Madsen (script of Ole Olsen adapted from the novel “Himmelskibet” by Sophus Michaëlis) about a trip to Mars. In 2006, the film was restored and re-released on DVD by the Danish Film Institute.

„It is the film that marked the beginning of the space opera subgenre of science fiction,” but Denmark did not make another science fiction film until „Reptilicus” in 1962.

Many Danish authors place their stories in a local setting, and all of them have something to say in addition to ´just´ being entertaining. You will find philosophical parables, time travels, space yarns, alternate history and much more, as well as stories which in different ways come close to the literary mainstream. The huge AngloAmerican influence on Danish culture since the Second World War is noticeable in the way the authors use the tropes and language of the genre in its modern, international vein.

In making these stories available in English, our aim – besides entertaining the readers – is to demonstrate that science fiction truly is an international genre and that it is being written, even in small European countries like Denmark.

With these words we hope you will enjoy this collection of the ´best of the best´.

The nine stories listed below originally appeared in Lige under overfladen © 2007 by Science Fiction Cirklen and contributors.

The ten stories listed below originally appeared in I overfladen ©2008 by Science Fiction Cirklen and contributors.

The Short Arm of History by Kenneth Krabat
A Contribution to the History of Denmark by Søren Elmerdahl Hemmingsen
When the Music’s Over by A. Silvestri
E-Puzzle by Nikolaj Højberg
Leading, Feeding by Ellen Miriam Pedersen
You are my Best Friend by Camilla Fønss Bach Friis
Dreams of Stone by Brian P. Ørnbøl
The Green Jacket by Gudrun Østergaard
In the Surface by Sara Tanderup
Interrogation of Victim no. 5 by Lars Ahn Pedersen