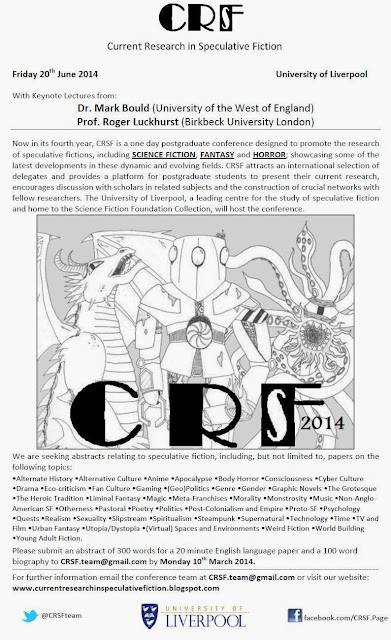 The conference was first held in 2010 at the University of Liverpool and has been held annually since, attracting an international selection of speakers from as far afield as Turkey and the USA. The conference aims to provide a welcoming and friendly atmosphere for researchers who are at the very beginnings of their fields to test ideas, network with others, and gain valuable conference experience.

The 2014 Conference Photo (courtesy of CRSF)

CRSF’s aim is to showcase some of the latest developments in this dynamic and evolving field, by providing a platform for the presentation of current research by postgraduates. The conference will also encourage the discussion of this research and the construction of crucial networks with fellow researchers.

The 2014th edition had Keynote Lectures from:

Dr. Mark Bould (University of the West of England) 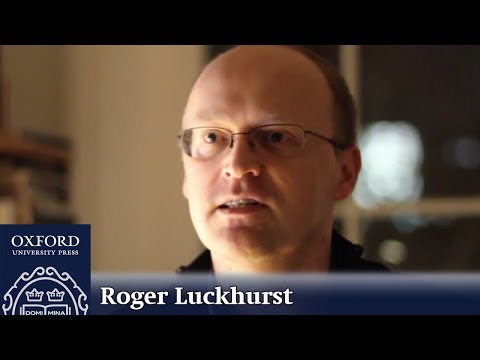 Now in its fourth year, CRSF  attracts an international selection of delegates and provides a platform for postgraduate students to present their current research, encourages discussion with scholars in related subjects and the construction of crucial networks with fellow researchers. The University of Liverpool, a leading centre for the study of speculative fiction and home to the Science Fiction Foundation Collection, hosted the conference. CRSF  is interested by speculative fiction, including, but not limited to, on the following topics:

Glyn Morgan is a doctoral student in the School of English at the University of Liverpool, his research is on non-mimetic depictions of the Holocaust. He has an MA in Science Fiction Studies and a BA in English Language and Literature, both from Liverpool University. He has numerous reviews and articles either published or pending. He has been chair of the CRSF conferences since their inception in 2011. Further details on Glyn’s research interests and activities can be found at www.glyn-morgan.blogspot.com.

Leimar Garcia-Siino is a second year doctoral student at the University of Liverpool whose research in fantasy genre theory explores the structural and functional similarities between modern fantasy and metafiction. She also has an MA in Science Fiction Studies from the University of Liverpool and a BA in Secondary English Education from the University of Puerto Rico. She published her first article in 2012 for the academic journal Hélice on metafantasy in George R.R. Martin’s A Game of Thrones, and has other reviews and SF-related translations pending publication.

Molly Cobb is a doctoral student at the University of Liverpool currently researching the impact of the Cold War on representations of identity in the 1950s work of Alfred Bester. She also has an MA in Science Fiction Studies and a BA in English Language and Literature, both from the University of Liverpool. She was a contributor to work done on E.C. Tubb and has work published in anthologies regarding him.

Chris Pak is currently in his final year of postgraduate research into the philosophical and political intersections of terraforming as an environmental literature. He was awarded the 2011 Foundation essay prize and has had articles and reviews published in Foundation and Green Letters, along with chapters in collections of essays including Postnational Fantasy. He is the current liaison between the SFRA and ASLE-UKI. For more information regarding activities and publications (with links to online articles), visit www.chrispak.webs.com.

Michelle Yost is a third-year doctoral student at the University of Liverpool currently researching the history and development of the hollow earth narrative in the nineteenth century, supervised by Prof. David Seed. She was a contributor to the SFE3, and more information about her research can be found on her blog at http://thesymzonian.wordpress.com.