I have no memory of when I met Boris. I only remember the stories I most often tell about him, from my early days in Croatian fandom. And damn, does that line make it seem like it was a hundred years ago! It was only ten years ago. Official SFera meetings were held at a pizza place in Gunduliceva street called Pizzicato. You had to go into a yard, turn left and go down into the dark. Erm, into the restaurant. I found it especially disturbing on late autumn nights as on Tuesdays the place was generally deserted. Even full it did not interfere with the meetings: the SF people sat at a long corner table in a nook on the side, practically walled off from the rest of the place. The pizza was good, too.

It was to one the meetings there I brought my friend Miran. His younger sister Ana was my high-school classmate and friend, and Miran was the undergrad student with long hair, dirty jeans and a lot of patience who tutored us in physics. Between him and Ana, I got a solid SF education before I discovered the world of fandom. So I was very eager to share with Miran this newly discovered world of other slightly strange people who loved the same books we did. I did not even start introducing him before he was recognized by one of the SFera members at the table. What shocked me was not the fact that Boris knew Miran but the fact that they were classmates! As in – the same age!

Boris Švel, the well-mannered, balding, ever genteel man was only 5 my senior?! I think I must have sat there with my mouth agape the entire time Boris and Miran exchanged pleasantries. Švel always wore a suit and tie and the style suited him perfectly. He wore it like a second skin. Once he came to SFeraKon in jeans and he looked so out of place in them to me, I kept staring. Boris had the demeanor and the mannerisms of a gentleman from a bygone era, opening doors, holding out chairs, asking me in consternation what in the world I was thinking trying to get to Porec from Zagreb (some 240 km) on a scooter because he could not wrap his mind around the idea of a girl riding a chopper. Or packing into a single backpack for a two day trip: the year he drove me to Istrakon, he kept asking me if I was sure it was all my luggage.

Boris Švel was the editor honored by the 2011 European Science Fiction Award for Best Fanzine in Europe. He was already editor of Parsek when I came to SFera, I think. Man, he would not give up the paper version of the fanzine for anything. Despite the internet websites and forums were fandom gossip circulated way faster and heated discussions existed in place of actual con reports, Boris insisted on a paper Parsek and on the witty editorials he wrote in an old-fashioned style. These will be very much missed. His perseverance made him into the person who edited the highest number of Parsek issues. He made it to issue 100 and went beyond, making the one hundred and first issue his first one in English. I brought many of those – half a suitcase – to Denvention. There were four issues of Parsek edited by Boris in English and I wrote about them here.

Spending the bulk of his time at his day job – he was a lawyer with his own practice – and editing, Švel did not write much fiction himself but write he did. (It seems to be a SFera bug everyone in the society catches one way or another.) He published his first story in 2001, in “Jutra boje potopa” (Mornings the Colour of Flood), the 7th SFeraKon Annual Anthology of Croatian SF. It was a collaboration with fellow writer Branimir Stip?evi? entitled “Leonardova podvala” (Leonardo’s scam). He won first prize in the Istrakon short story contest in 2009 with the story “Razvod” (Divorce), where he fused his love of literature and law. “Razgovor u birtiji” (A conversation at the pub) was written in the Zagreb dialect but nonetheless won third prize in Istria in 2006. Davor Šišovi?, one of the Croatian SF editors and main organizer of the Festival of Fantastic Literature said he particularly liked Švel’s partisan stories, a Croatian military SF subgenre in which stories feature Yugoslavian partisans from WWII. These showed Švel’s particular interest in the military: he had served in the Yugoslav army on the brink of Croatian War for Independence (military service for a year was mandatory in former Yugoslavia for all men) and later spent almost a decade as a military journalist. According to Šišovi?, Švel’s partisan stories were the inspiration for the idea of partisans as a possible theme for the Festival of Fantastic Literature, one that may yet happen. My favorite among Boris’ stories was the one he sent for the Croatian erotic SF anthology Bludu?nost (Future fornication) – entitled “Nevjerojatne pustolovine baruna Trenka” (The Unbelieavable Adventures of Baron Trenk). 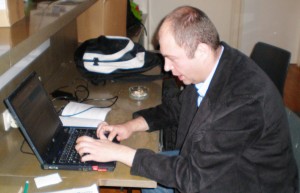 Boris supported fledgling conventions in Croatia not only by attending but by being part of the program. His talks covered many topics but he was the most knowledgeable Croatian fan when it came to Robert A. Heinlein, Joseph Campbell and the Golden Age. Personally, I was especially fond of his AustroHunagrian Steampunk talk, one that he also generously held at “SFera u Profilu”, (SFera in Profile) a monthly event I ran at the Zagreb bookstore Profil where he was a popular and frequent speaker. I am told he recited Vulcan poetry at the moon while full of beer in a unrepeatably funny way (I missed that bit of Istrakon.) He hosted the favorite of all fandom quizzes, the SFeraKon held Bo?koteka. He drew a huge crowd not only with the challenging trivia questions but also because everyone wanted to hear him deliver his unique Bosnian Space Program Jokes which became the staple of the quizz.

SFera held a commemoration for Boris last Saturday, at Booksa, a little stiffly since not everyone attending was fandom. Boris spent years as a military journalist, had built an impressive carrier as a lawyer, and had many friends. But at the commemoration mostly people from Croatian fandom came forward to speak: Petra Buli?, Mirko Grdini?, Mirko Karas, Davor Šišovi?. Ivana Dela?, Croatian author and larper, read Švel’s award-winning story “Razvod” (Divorce). After the reading, she added that Boris, on top of being a knowledgable fan, a good writer, an accomplished editor and a gentleman above all, was also one kick-ass divorce laywer and a true friend. I could not agree more. (Whenever I felt the urge to divorce my husband, it was him I would consider calling.)

I hope he got to find out what the question was and that he heard it from his favorite author, Robert A. Heinlein. (His friend Aleksandar Žiljak closed his speech with a similar wish to the consternation of the local parish priest in the small northern Croatian town of Sv. Ivan Zelina where Švel was laid to rest last Wednesday.)