BIFFF : “Let horror only be on screen!” 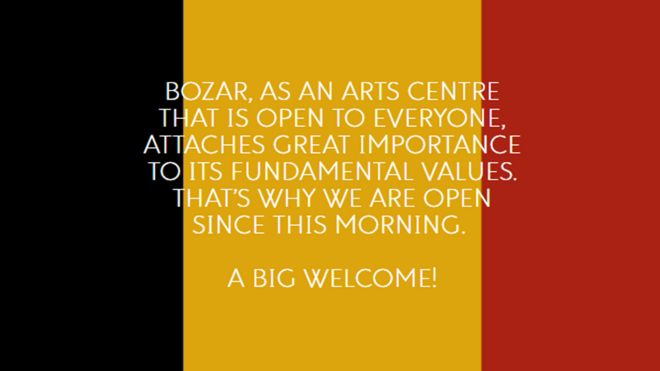 The Bozar Centre posted a message on its website featuring the Belgian flag saying: “Bozar, as an arts centre that is open to everyone, attaches great importance to its fundamental values, that’s why we are open since this morning. A big welcome.”

Winners of the Grand Prize, the Golden Raven statuette, include “Army of Darkness”, “Radioactive Dreams”, and “Dog Soldiers”.

For more than 30 years now, the Brussels International Fantastic Film Festival (BIFFF) rouses the European capitol from its winter sleep for the most expected cinematographic event of the year. Bursting to the seams with amazing shows and original manifestations (the Make-Up Contest, the International Body Painting Contest, the Zombie Parade in the heart of Brussels, the Japanimation Day, the Manga Market, the Cosplay Contest, the renowned Vampire Ball and many other festivities) the BIFFF is a warm and atmospheric celebration of everything related to the genre.

During 13 days (what a magic number!) more than 100 films were shown, both world- and international premieres, ranging from Fantastic, Thriller, Science-fiction, Horror and Cult to Underground cinema, and special screenings such as the Fantastic Night and Midnight X-tremes.

Each year, the BIFFF welcomes more than 60 000 spectators and invites more than 100 international guests, making it one of Europe’s leading film festivals.

Brussels is one of the founding members of the Federation together with Sitges.

Despite the recent tragic events, more than 53 000 participants came to the 2016 BIFFF ! Thank you everyone!

The public price goes, after GHOST GRADUATION in 2013, once again to Javier Ruiz Caldera for SPY TIME.

The jury of the 1st Art Contest took the decision to reward MONSTRE, a painting by Nathan Vranckx.