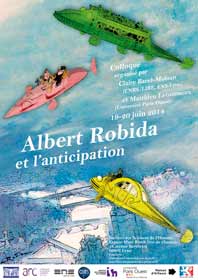 Albert Robida (14 May 1848 – 11 October 1926) was an early pioneer of science fiction and founding father of science fiction art („the first visual artist who could be said to specialize in SF illustration, with an abiding interest in fabulated inventions; the most important and popular nineteenth-century figure in this nascent field”), French illustrator, etcher, lithographer, caricaturist and novelist.

He edited and published „La Caricature” magazine for 12 years. Through the 1880s he wrote an acclaimed trilogy of futuristic novels.

These works drew comparison to Jules Verne. Unlike Verne, he proposed inventions integrated into everyday life, not creations of mad scientists, and he imagined the social developments that arose from them, often with accuracy: social advancement of women, mass tourism, pollution, etc. Robida’s novels are unique for their time. A host of futuristic technological extrapolations are juxtaposed onto a realistic (from a 19th-century perspective) representation of lifestyles, beliefs, and social institutions. His „La Guerre au vingtième siècle” describes modern warfare, with robotic missiles and poison gas. His Téléphonoscope was a flat screen television display that delivered the latest news 24-hours a day, the latest plays, courses, and teleconferences.

The Colloquium is organized by Claire Barel-Moisan (Centre national de recherche, École Normale Supérieure,  Lyon : CNRS. UMR LIRE. ENS-Lyon) and Matthieu Letourneux (Université Paris Ouest/West Paris University) and is held at the Institute of Human Sciences in Lyon on the 19th and 20th of June.

“Often reduced, according to a teleological principle, to a kind of archaic science fiction, the work of Albert Robida wins instead being seen in the literary and cultural context of his time. Of course, when talking about ”Le Vingtième siècle” (The Twentieth Century), ”La Guerre au xxe siècle”(War in the Twentieth Century), ” La Vie électrique ” (The Electric Life) or ”Un voyage de fiançailles au xxe siècle” (A Trip of Engagement in the Twentieth Century), it’s really an imaginary oriented towards a society of the future that Robida provides the readers from 1880-1890. But his early anticipative speech is rooted in the logic of the contemporary satirical press, exaggerating the foibles of his time caricaturing them via the temporal extrapolation. Robida’s  literary style as his graphic art are a part of a tradition that engages reading modes (those of the small press and satire) familiar to readers of the late nineteenth century, resulting in an apprehension of texts quite different from that of the current readers.

More generally, we would like to highlight, in all his works, both the graphic dimension of the anticipation and his writer contribution, which has so far been rarely addressed as such in its stylistic and poetic dimension, and in his dialogue with the contemporary media culture. We will be particularly sensitive to the Robida’s humor register, and to the original link between humor and anticipation in his works. Also generic hybridity of his novels of anticipation must be highlighted and the interweaving of multiple models mobilized – panoramic literature, Bildungsroman, dystopia, satire, adventure novel, etc. One of the challenges of the analysis of these anticipation texts will address the work of Robida not as an isolated case, but to reassess its place in the european literary history highlighting the echoes with stories of scientific adventure and with  the vast literature of anticipation developed at the turn of the nineteenth century, in a multitude of European media.”

10.45 – Valerie Stiénon (Université Paris 13):  “An Overview of That Time. Robida Columnist of the Universal Exhibitions ”

11.30 – Yves Citton (Université Grenoble 3) : “Mediation and simulation in Albert Robida’s Works in the Light of the Archeology of Media”

15.15  – Caroline Grubbs (University of Pennsylvania): “Dispatches From the Front of An Imaginary War: War stories in Albert Robida’s Twentieth Century ”

17.30 – Film Screening in connection with the work of Albert Robida

10.15 – Bertrand Tillier (Université de Bourgogne) : “Robida and the Conquest of the Future through the Air”