A video conference with the italian writer Valerio Evangelisti was held at Librairie Charybdis (Charybdis Bookstore), 129 rue de Charenton, Paris, on the 4th of February 2016 from 19:30 to 21:30. The interviewers were Jacques Barbéri and Serge Quadruppani.

„Valerio Evangelisti is the author among others of “Panther”, “Pirates”, “Nostradamus”, “The Casting of Fire” and of course the Saga of the inquisitor Nicolas Eymerich, the tenth and final volume of the monumental masterpiece was published in French in November 2015. Valerio Evangelisti has talked with his two main french translators, Serge Quadruppani (6 volumes) and Jacques Barbéri (3 volumes), about the disturbing figure of the Aragonese Dominican Nicolas Eymerich’s universe. A rare and unmissable evening, in our humble opinion.” – ActuSF

Valerio Evangelisti (born June 20, 1952) is an Italian writer of science fiction, fantasy, historical novels and horror. He is known mainly for his series of novels featuring the inquistor Nicolas Eymerich and for the Nostradamus trilogy, all bestsellers translated into many languages. Some of his books are seen as part of the body of literary works known as the New Italian Epic.

Valerio Evangelisti earned his degree in Political Science in 1976 with a historical-political thesis. He was born in Bologna, where he currently lives; he spends some time each year in Puerto Escondido, Oaxaca, Mexico, where he owns a house.

Until 1990 his career was mainly academic. He also worked for the Italian Ministero delle Finanze (Italian Treasury Department).

His first written works were historical essays, including five books and some forty articles. In 1993 his novel “Nicolas Eymerich, inquisitore” (Nicolas Eymerich, Inquisitor) won the Urania Award, which was established by Urania, Italy’s main science fiction magazine, with the aim of discovering new talent in the field.

Nicolas Eymerich is a real historical character, member of the order of the Dominicans and inquisitor in the Spanish Inquisition. He was born in 1320 in Girona, Catalonia, and died in 1399. Evangelisti’s interpretation of his character is a cruel, ruthless, haughty, restless man, who acts mercilessly to protect the Catholic Church against perceived menaces of natural or supernatural origin. At the same time he shows an outstanding intelligence and a deep culture in his actions. In the novels of the series he investigates the mysterious phenomena of Medieval Europe, thus subtly influencing many of the historical events of that epoch; on many occasions the solution of the riddles comes up from stories which are narrated along with the main plot, normally set in the present and in the future. Evangelisti’s atmospheres are normally dark, nightmarish, haunting.

Another success of 1999, also translated in several languages, is the Magus Trilogy, a romanticized biography of the famous Middle Ages prophecies writer Nostradamus. The three novels, “Il presagio” (The Omen), “L’inganno” (The Deceit) and “L’abisso” (The Abyss) sold over 100,000 copies in Italy.

He is currently the director of the “Carmilla” magazine. In the last years he has written some works which show his love for heavy metal music, namely the short stories collection Metallo urlante (referring to the French magazine Metal Hurlant) and the novels “Black Flag” and “Antracite“: they are set during the American Civil War and feature a new character, “Pantera”, a palero shaman. One of his latest novels, “Noi saremo tutto” (We Shall Be All), spans several decades of the last century, exploring the life of Eddie Florio, a gangster, against the background of the history of the trade unions and the workers’ battles for civil rights. 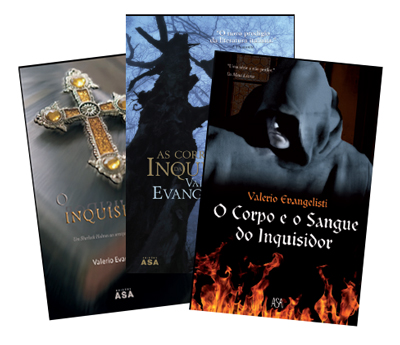 Mexico is the setting for his next two novels, “Il collare di fuoco” (The Fire Collar), which was published in November 2005 and “Il collare spezzato” (The Broken Collar, October 2006). In 2007 “La luce di Orione” (The Light of Orion) was released, the ninth title in the Eymerich series, followed in 2010 by “Rex tremendae maiestatis“. “Tortuga“, a novel about pirates of the Caribbean, was published in 2008.

„Lo and Behold: Reveries Of The Connected World” by Werner Herzog