Old-time SF fan, later investigative journalist and world-famous writer, Stieg Larsson  (author of the Millenium Trilogy : „The Girl with the Dragon Tattoo”/original title translated into english : „Men who hate women”, 2005; „The Girl Who Played with Fire”, 2006; „The Girl Who Kicked the Hornets’ Nest”, 2007), has unexpectedly been revealed as somewhat of a “private eye” in the hunt for the culprits in the yet unsolved murder of Swedish Prime Minister Olof Palme  in 1986.

The newspaper Svenska Dagbladet has been given access to files kept by the magazine Expo (which Stieg worked for and co-founded). Stieg Larrson dug up a lot of info about the apartheid “South Africa trail”, ie that the assassination was connected to forces around the then apartheid regime. English articles about it:
http://www.svd.se/nyheter/inrikes/huvudsvep-palmemordet_3295256.svd?sidan=9
http://www.svd.se/nyheter/inrikes/huvudsvep-palmemordet_3295256.svd?sidan=5

It reminds me of his career in science fiction. In 2005 my friend Bertil Falk, who in 1969 re-launched the 1940’s SF pulp Jules Verne Magasinet (JVM, but in a more modest form), gave me a bag with the left-over editorial archive of JVM, to forward to the Royal Library in Stockholm. For logistic reasons he couldn’t get them the papers himself, but he said it was OK if I looked them through handing them over (which I did within a few days, after first contacting the library to be sure they wouldn’t throw them away). So I went through them.
In the papers where some rejected short stories sent to JVM. Among them one by a young “Stig Larsson”, actually a very crappy story about a future when science is banned and a guy is hunted, but it was written in 1969. (I think it was an early version of a story later published in one of his fanzines, where he had several – I don’t remember them since I haven’t read those fanzines since the 70’s.) This short story was later dug up from the Royal Library by someone and has been published in a local newspaper. Another of his early SF stories has also surfaced on the net (I have electronic copies of two). They are no good, but then he was in his teens as he wrote them.

In 1976 I went to my first SF con (ScanCon 76) and joined the club SFSF (SFSF = abbreviation for the Scandinavian SF Association) and within about half a year or so I bumped into the couple Stieg and Eva (Gabrielsson), who had just moved to Stockholm from the north. “Stig” had already changed his first name to Stieg, name inspired by the 1940/50’s crime writer Stieg Trenter (whose widow Ulla Trenter I incidently happen to know). You see, there was another “Stig Larsson” in his hometown, who would also become a writer.
Me: a young little neofan, but Stieg and Eva where already Big Name Fans, having – together with one Rune Forsgren – formed Umefandom (from their hometown Umeå) and published a lot fanzines, many issues of for instance Fijagh and SFären, for 4-5 years.

In 1977 SFSF bought the folded “SF Book Club”, had a boost in membership (up to 7-800) and could afford to rent a club house in Stockholm. As they were BNFs and well-known from their fanzines, Stieg and Eva were immediately recruited to the board of SFSF. Stieg would later, in 1980, serve a term as SFSF chairman. Both of them together edited the club newsletter, named Fanac (thick issues, probably among the best in the run), and the SFSF club entered a Golden Era of activity that lasted 1977-80.

Based in the new club house (situated on Pontonjärgatan 45, in the district Kungsholmen) SFSF had several club meetings every week, a book discussion circle, five Minicons were held there and the club started the SF Bokhandeln on the premises (the SF Bookstore, after several transformations now situated in the Old town), which had windows to the street. I went there at least every week, often several times weekly, and most of the time I met Stieg there, often also Eva. I remember Stieg with a paintbrush painting the walls before opening the SF Bokhandeln while I laboured with setting up the book shelves.

These were days of furious activities. A lot of young guys gravitated towards SFSF. I was involved in the mimeographed newszine VÄ which often opposed the “old farts” in the SFSF board. If you care to know, in our news pieces of critique we often referred to Stieg as “Chairman Larsson”, borrowed from “Chairman Mao” (Stieg was a leftist, and he might as well be connected to maoism, was the thought…). There were many long sessions when Stieg, me and many others sat in the sofas in the SFSF basement debating everything between heaven and Earth, club politics, and certainly general politics too. Eva was involved in starting a feminist sf group, which also got some sour grapes by the opposing side in internal club debates. There are many stories that could be told, but probably mostly of interest to those who was there and know about the small universe of Stockholm fandom in the late 70’s (and incomprehensible to others). 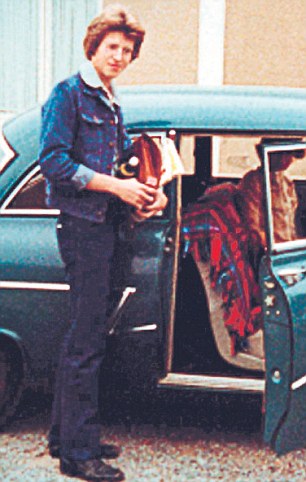 Stieg Larsson in the ’70s

One episode, however, showed what a Very Occupied guy Stieg was. The last small con, before SFSF had to leave the club house, was Minicon 5 in 1980. I believe it was scheduled for a Saturday-Sunday, and as I came to the club house Friday just before 4pm, Stieg sat by the telephone desperately calling around to rent films to show… And in Sweden most businesses close at 4pm on Fridays! That wasn’t particularly good planning by Stieg. As I remember, Minicon 5 was a failure. A gloomy feeling had invaded SFSF at the time, because the landlord had announced an almost doubling of the rent and the club couldn’t afford it. We knew we’d have to leave the place. The SF Bookstore survived a couple of years via mail order from a rented, cheaper cellar before re-opening on Roslagsgatan, moving to Atlasgatan, then Stora Nygatan, and finally Västerlånggatan where it is now.

The last things Stieg did as chairman was to launch plans and ideas of what the club should do when it had to leave the club house, including keeping the bookstore as a mail order operation. He was kind enough to send these plans to the VÄ newsletter in advance, the heaviest critiques of the SFSF board. It was typical of Stieg being open minded enough to include also those who may disagree, but VÄ gave very favourable comments to the plans as they were published. No matter if we had different opinions at times, Stieg was always a very serious, kind guy, full of energy (sometimes having too much at hand), always reasonable.

The last time I saw him in SF businesses – I bumped in to him later in the 80’s, but he was no World Famous author then, and it was short – was early 1981 on the SFSF business meeting (their so called de charge meeting) which discussed his plans of what to do after leaving the club house. After that, he disappeared from the sf and fandom horizon. I know he had begun working for the news agency TT and slowly developed his news-reporting from Fanac and other fanzines into covering neo nazis, racism and stuff. I began seeing him in TV spots. He had become too occupied with new arenas to “conquer” to have any time for that skiffy stuff. And when I saw his short story in the JVM papers he was dead, though I had heard his first novel had just arrived (or was about to).
But I had no idea of what would happen to this guy who I knew very well from earlier years, and who throughout the 1970’s was one of the most active sf fans in Sweden. Except for some politics, there weren’t any book writing, no investigative journalism, nothing like that for Stieg in those days. It was science fiction, sf clubs and fanzines all the way.

P.S. The virtually only one from the fandom days after the early 1980’s Stieg keept in touch with was one John-Henri Holmberg. JHH’s recollections of the SFSF time leave things to desire (himself a part of and under fire in the club’s debates) and he has on occasion talked about Stieg’s later life, though of little sf interest (journalism, the magazine Expo, beginning writing the Millennium books, etc).

„On his twelfth birthday, Larsson was given a typewriter as a birthday gift by his parents.

Stieg Larsson’s first efforts at writing fiction were not in the genre of crime, but rather science fiction.

Through the 1970s, Larsson published around 30 additional fanzine issues; after his move to Stockholm in 1977, he became active in the Scandinavian SF Society where he was a board member in 1978 and 1979, and chairman in 1980.

In his first fanzines, 1972–74, he published a handful of early short stories, while submitting others to other semi-professional or amateur magazines. He was co-editor or editor of several science fiction fanzines, including Sfären and FIJAGH!; in 1978–79, he was president of the largest Swedish science-fiction fan club, Skandinavisk Förening för Science Fiction (SFSF).

An account of this period in Larsson’s life, along with detailed information on his fanzine writing and short stories, is included in the biographical essays written by Larsson’s friend John-Henri Holmberg in The Tattooed Girl, by Holmberg with Dan Burstein and Arne De Keijzer, 2011.


In early June 2010, manuscripts for two such stories, as well as fanzines with one or two others, were noted in the Swedish National Library (to which this material had been donated a few years earlier, mainly by the Alvar Appeltofft Memorial Foundation, which works to further science fiction fandom in Sweden). This discovery of what was called “unknown” works by Larsson caused considerable publicity.”