The author of ”Under the Skin” is to publish his first novel in over 10 years.

“The Book of Strange New Things”  is Faber’s first novel in over 10 years and is to be launched this year in November by Hogarth Press (imprint of Penguin Random House/Bertelsmann).

The novel begins with a man saying goodbye to his wife before setting out on a perilous journey as a Christian missionary. On an outer planet. The theme resembles Mary Doria Russell’s “The Sparrow” ? Don’t be so sure, Michel Faber is much more original ! And talented !

„An unexpected and wildly original novel about adventure, faith and the ties that might hold two people together when they are worlds apart“.

Canongate’s publishing director Francis Bickmore described it as: “a brilliantly compelling book about love in the face of death, and the search for meaning in an unfathomable universe“. He added: “Readers won’t have encountered anything quite like it before.”

“The Book of Strange New Things”  begins with Peter, a devoted man of faith, as he is called to the mission of a lifetime, one that takes him galaxies away from his wife, Bea.  Peter’s to travel to a new planet, Oasis, to work for a mysterious corporation called USIC. He’s tasked with reaching out to the indigenous species, to make sure they are as peaceful as they seem.

Peter becomes immersed in the mysteries of an astonishing new environment, overseen by an enigmatic corporation known only as USIC.  His work introduces him to a seemingly friendly native population struggling with a dangerous illness and hungry for Peter’s teachings—his Bible is their “book of strange new things.” But Peter is rattled when Bea’s letters from home become increasingly desperate: typhoons and earthquakes are devastating whole countries, and governments are crumbling.  Bea’s faith, once the guiding light of their lives, begins to falter.  Suddenly, a separation measured by an otherworldly distance, and defined both by one newly discovered world and another in a state of collapse, is threatened by an ever-widening gulf that is much less quantifiable.  While Peter is reconciling the needs of his congregation with the desires of his strange employer, Bea is struggling for survival.  Their trials lay bare a profound meditation on faith, love tested beyond endurance, and our responsibility to those closest to us. Marked by the same bravura storytelling and precise language  The Book of Strange New Things is extraordinary, mesmerizing, and replete with emotional complexity and genuine pathos. A monumental, genre-defying novel over ten years in the making, Michel Faber’s “The Book of Strange New Things” is a masterwork from a writer in full command of his many talents.”

“The Book of Strange New Things is Michel Faber’s second masterpiece, every bit as luminescent and memorable as The Crimson Petal and the White.  It is a portrait of a living, breathing relationship, frayed by distance; it’s an enquiry into the mountains faith can move and the mountains faith can’t move.  It is maniacally gripping and vibrant with wit.  I didn’t so much read The Book of Strange New Things as inhabit it.” —David Mitchell

“Michel Faber’s The Book of Strange New Things certainly lives up to its title.  Faber, as he showed in Under the Skin, does strangeness brilliantly. I can’t remember being so continually and unfailingly surprised by any book for a long time, and part of the surprise is the tenderness and delicacy with which he shows an emotional relationship developing in one direction while withering in another. I found it completely compelling and believable, and admired it enormously.” —Philip Pullman

“Weird and disturbing, like any work of genius, this novel haunted me for the seven nights I spent reading it, and haunts me still. A story of faith that will mesmerize believers and non-believers alike, a story of love in the face of the Apocalypse, a story of humanity set in an alien world—The Book of Strange New Things is desperately beautiful, sad, and unforgettable.” —David Benioff 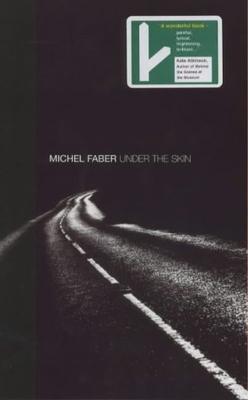 Michel Faber’s first novel was “Under the Skin“.

Set in Scotland, it follows Isserley, an extraterrestrial sent to Earth to pick up unwary hitch-hikers. Scarlett Johanssen  played Isserley (as Laura) in the film version of the novel (directed by Jonathan Glazer), released in the European cinemas this spring.

“The Book of Strange New Things”, the long-awaited new novel from the internationally bestselling author of „Under the Skin” will be launched on October 28, 2014 by Hogarth.

Michel Faber was born in The Hague, Netherlands. He and his parents emigrated to Australia in 1967. He attended primary and secondary school in the Melbourne suburbs of Boronia and Bayswater, then attended the University of Melbourne, studying Dutch, Philosophy, Rhetoric, English Language (a course involving translation and criticism of Anglo-Saxon and Middle English texts) and English Literature. He graduated in 1980. In 1993 he, his second wife and family emigrated to Scotland, where they still reside.

In Scotland, Faber is considered a Scottish author, or at least “Scottish by formation” (the term defining eligibility to enter the Macallan Short Story Competition, which Faber won in 1996). The fact that most of Faber’s literary prizes, like The Neil Gunn Prize, The Macallan Prize and The Saltire First Book of the Year Award, were won in Scotland, that Faber lives in Scotland, and that his works are published by a Scotland-based publisher, all lend credibility to this view. In Australia, Faber is considered an Australian, because of his long residence there, because almost all of his schooling was completed there, and because some of his short stories are set in Australia. In the Netherlands, he is considered Dutch, except by those who are unaware of his origins. (Faber’s works are translated into Dutch by professional translators, not by Faber himself.)

In 2001, when the publication of “The Crimson Petal and the White” was imminent, Canongate urged Faber to become a UK citizen so that the book could be submitted for the Booker Prize, which was at that time open only to authors holding Commonwealth passports. Faber declined, as he did not wish to become British at a time when the British government was preparing to follow the United States into war on Afghanistan and Iraq. Faber’s citizenship remains Dutch.

He identifies himself as European, and the themes, scope and style of his literary work are not characteristically British, Australian or Dutch, but broadly European.

Michel Faber wrote seriously from the age of fourteen, but did not submit his manuscripts for publication. Many of the short stories that appeared in his debut collection, as well as earlier drafts of “The Crimson Petal and the White”, were completed during the 1980s and stored away. Another novel completed in this period,  “A Photograph Of Jesus”, remains unissued. During the 1990s, with the encouragement of his second wife, Eva, Faber began entering – and winning – short story competitions. This led to him being approached by the Edinburgh-based publishers Canongate Books, who have published his work in the UK ever since.

Faber’s first published book was a collection of short stories, “Some Rain Must Fall”, issued in 1998. Of these stories, the title piece had won the Ian St James Award in 1996, “Fish” had won the Macallan Prize in 1996, and “Half A Million Pounds And A Miracle” had won the Neil Gunn Award in 1997.

The first of Faber’s novels to be published was “Under the Skin” (2000), written in, and inspired by, the Scottish Highlands. Like much of Faber’s work, it defies easy categorisation, combining elements of the science fiction, horror and thriller genres, handled with sufficient depth and nuance to win almost unanimous praise from literary critics. It was translated into many languages (17 by 2004) and secured his reputation in Europe, as well as being shortlisted for the Whitbread First Novel Award.

Faber’s third published novel was “The Courage Consort” (2002), about an a cappella vocal group rehearsing a piece of avant-garde music.

In 2002, Faber’s 850-page “The Crimson Petal and the White” was published. Twenty years in the writing, the book showed Faber’s admiration for Dickens’s prose and George Eliot’s narrative architecture, but its themes were informed by feminism, post-Freudian awareness of sexual pathology, and post-Marxian class analysis, as well as by unrestricted access to Victorian pornographic texts that had been suppressed until the late 20th century. The Crimson Petal and the White was a bestseller in the USA, Italy, France, Holland and Belgium, and a steady seller in most other countries.

In 2004, as part of the Authors on the Frontline project, Faber travelled to Ukraine with Médecins Sans Frontières, to witness MSF’s intervention in the HIV/AIDS epidemic there. Faber wrote an article for The Sunday Times, published in January 2005. MSF had originally contracted each of the 14 authors involved in the project also to produce a piece of fiction, inspired by their frontline experience but not necessarily on the subjects dealt with in their Sunday Times article. These stories were to be published in an anthology, but MSF’s negotiations with the intended publisher broke down before most of the authors had begun their fictional pieces. Faber’s story, ‘Bye Bye Natalia’, was eventually published in the July 2006 edition of Granta and then chosen for inclusion in the 2008 edition of The O. Henry Prize Stories, an annual anthology dedicated to writers who are deemed to have made “a major contribution to the art of the short story”.

Wary of being pigeonholed, particularly in the USA where “The Crimson Petal and the White” is by far his most popular work, Faber vowed never to write a sequel to his bestselling Victorian novel. However, he did write a number of short stories featuring characters from “The Crimson Petal and the White“, in scenarios that pre-dated or post-dated the events of the novel. While not a sequel (the novel’s controversial ending was allowed to remain definitive and the fates of the heroines Sugar and Agnes were left undisclosed), the stories offered additional perspectives on some of the characters’ past and future lives. Issued first in Italy, by Faber’s long-term Italian publishers Einaudi, the stories were issued by Canongate in 2006, as “The Apple“.

“The Fire Gospel“, was published in 2008 as part of the Canongate Myth Series. Inspired by the myth of Prometheus, it tells the story of a scholar of Aramaic called Theo, who steals an ancient ‘gospel’ describing the death of Jesus, from a bombed museum in Iraq. The book gently satirizes the publishing industry.

In 2014, Michel Faber will publish “The Book of Strange New Things”.

In 2009, he donated the short story “Walking After Midnight” to Oxfam’s ‘Ox-Tales’ project, four collections of UK stories written by 38 authors. His story was published in the ‘Water’ collection.

A four-part adaptation of “The Crimson Petal and the White”, produced by the BBC in 2011, starred Romola Garai, Chris O’Dowd, Richard E. Grant and Gillian Anderson.

“The Courage Consort” has been adapted for radio twice, by the BBC (UK) and the ABC (Australia)

“Under the Skin” has been adapted into a British Film in 2013. This was directed by Jonathan Glazer and starred Scarlett Johansson. It premiered at the Venice Film Festval on the 3rd of September, 2013.