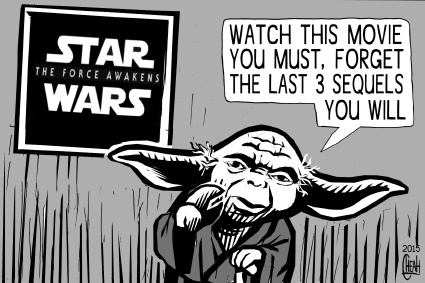 “Doesn’t that happen with franchises, that each new film seems not so much a brave new story as one more imprint from the trusted pattern? If you loved Star Wars when you were 12, or if you were a dad who rejoiced with that kid, you are likely 50 and 70 now. That’s quite a stretch, especially if Episode VII seems just a little secondhand sometimes. What will count is whether there are new children who believe that movies are about technology and doing the same thing again. And again. Cross your fingers.” – David Thomson, The Guardian

I saw the new Star Wars film the other day, “The Force Awakens”, in 3D and everything. It was actually better than I had feared. Quite a lot was borrowed from the 1977 film, SW:TOM (Star Wars: The Original Movie). A young person, the scavenger girl Rey in this case, is the main character, living on a desert planet. Suddenly storm troopers arrive in search for…yes, a cute robot, which carries something important. Hitchcock called it a McGuffin, something everyone wants, just to keep the plot moving. In the 1977 film it was plans of the Death Star, here it’s a map to where Luke Skywalker is, the last Jedi. It’s wise to borrow plot elements and much else from the first film, because that was the film that hit like a dinosaur destroyer. I remember when I first saw it. Sam J Lundwall had fixed a preview of it to the attendees of his SF-Kongressen 1977 con in Stockholm. Nobody had seen a film like that before! The con goers applauded for a long time during the credits. And that was con attendees, who knew what science fiction could be like. The two follow-ups weren’t bad either, but the impact was less because then we knew what to expect.

The much later prequels were very disappointing. They were clearly aimed at kids, displaying toys, a cute (but hated) sidekick, and much more computer animation than one can stand, including an overlong flying sports car race (children like cars, especially if they fly). Clearly Mr Lucas was thinking of all the merchandising and selling as many toys to kids as possible. When Disney bought Star Wars I had a bad feeling. What’s Disney known for? They practically invented merchandising, they do toys and have been very heavy in computer animation! Maybe they’d even revive Jar Jar Binks…

But despite this, I think they did a reasonable job with “The Force Awakens”. Maybe it’s because JJ Abrams is a too good director to mess things up? There are tons of computer animation but I don’t mind that if the story holds together (I liked eg “Avatar” which is practically only computer animation).

From the 1977 film we also recognise eg a chaotic space bar full of alien beings, an even bigger death star, a Darth Vader figure, dogfights between X-wings and TIE fighters, a Yoda-like figure (though that came with “The Empire Strikes Back”), cute robots (that C3PO has a read arm isn’t explained, but we’ll learn why in coming films I  gather), an evil Emperor but 30 feet tall this time, Max von Sydow as an Obi Wan Kenobi (but he has a small part) – but not the least Han, Leia and Luke back on the screen again. But Luke has a very small part too, in the end. I guess he’ll appear much more in coming films.

Harrison Ford actually has a big part. He’s much older, but the same old Han Solo. Rey is joined by Finn, a renegade from the storm troopers, and they happen to bump into the Millennium Falcon considered to be almost junk when they are chased by the First Order, the organisation that wants to restore the evil Empire. In the Falcon they run from the First Order when they bump into a rusty freighter full of monsters which Han solo is smuggling. Han, Rey, Finn and of course Chewie the Wookiee must find Luke Skywalker so the Jedi Order can be restored to save the galaxy.

It is revealed (rather early in the film, I don’t think a spoiler is needed) that Rey is the daughter of Luke. Leia is promoted to General Organa, as well as having a new hair style. And the evil Kylo Ren (the Darth Vader figure) is the son of Han and Leia. The cousins Rery and Kylo have a long lightsaber fight scene which doesn’t exactly show love in the family ,while the fire trees are cut down like matchsticks.

It strikes me how much of a family affair Star Wars is! Most main characters are relatives or lovers (or ex-lovers like Han and Leia). Here the fate of the entire galaxy lies in the balance and it all depends on one single family…

Back to the late 70’s. I happened to come in contact with two guys (something like 13 years old) from southern Sweden, Jonas and Lars, who began doing fanzines and started Sweden’s first Star Wars club. They called it The Star Wars Club Tatooine and were even invited to join our small “secret” APA, called Cucumber,  since they seemed sociable and you should support enthusiastic neofans anyway. Cucumber was for carbon copied zines, a bit like samizdat.

Their club became a big success, reaching 3-400 members, as they reported in their Cucumber zines. But that was before The Empire Striked Back! We could follow it in our APA. Lucasfilm contacted Darth Vader & Sons Law Firm (or whatever the name was) and sent threatening letters claiming that “Tatooine” was a trade mark of Lucasfilm, so dear 13-year-olds stop loving our film so much that you trample on our property…else, our lawyers will hack you to pieces. The Dark Side is strong with us, you know.

The fact is that I’m rather sure Lucasfilm was wrong, according to Swedish trade mark law. They must *register* their trade mark top make such claims and I doubt they had done that. I guess the real reason for Lucasfilm’s actions was: If there is to be a fan club, we want to control it, without competitors.. Jonas and Lars just changed the name of their club to The Rebel Alliance and continued. No official Star Wars fan club has to my knowledge ever started in Sweden.

In that way, they beat the Evil Empire. “Unexpected Protocol: A Critique of the “I, Robot” Book and Motion Picture”

Incorporated: Or How I Lost My Soul to Climate Change by Nina Munteanu (Canada)