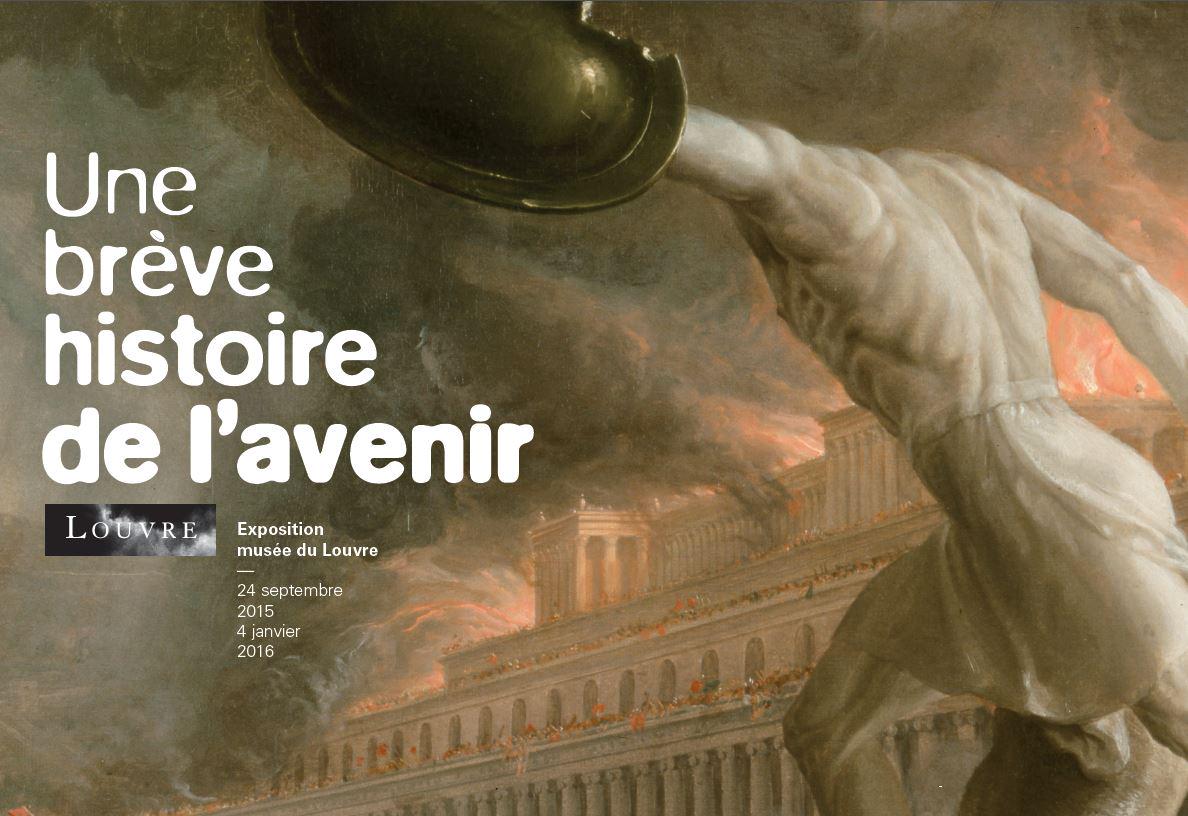 „Une brève histoire de l’avenir” (A Brief History of the Future) Art Exhibition is a multidisciplinary event creating a dialogue between the insignia of the past with contemporary designs in order to retrace the story of the past who can shed light on our view of the future. 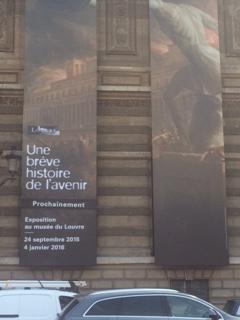 The exhibition is held around four themes subject to specific commands to contemporary artists: scheduling the world, the great empires, expanding the world and the contemporary polycentric world.

Through these works are highlighted the succession of historical moments of expansion and decline, the construction of exchanges between individuals or communities and the creation of various means of communication making the exchanges possible. Particular emphasis will be given to mediation and to the development of perspective, including through the creation of a debate forum. 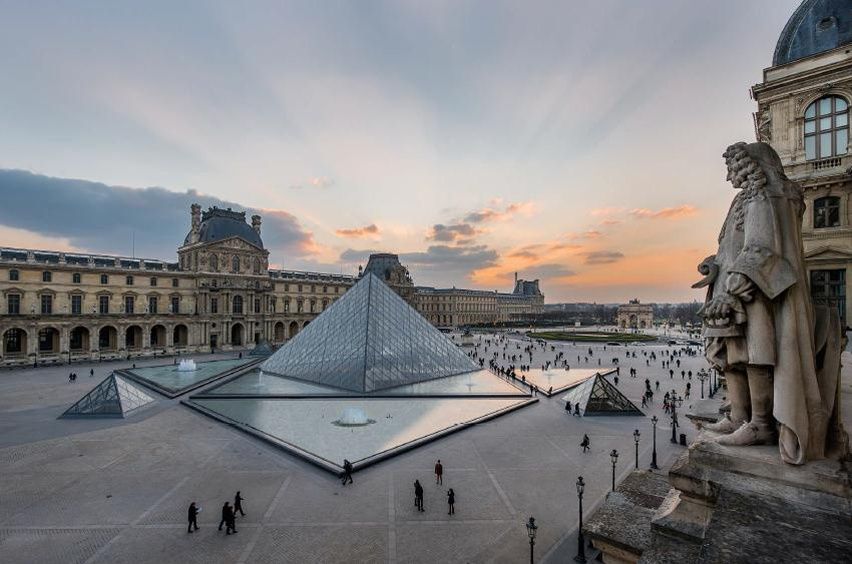 The Royal Museums of Fine Arts of Belgium and the Louvre offer a unique innovative project and articulated around the future !

Paintings, sculptures, photographs, videos, installations and digital arts: over 70 works of contemporary art question our future, 2050. Exposure to MRBAB tackles major societal themes such as consumerism, global conflicts, scarcity of natural resources, social and economic inequality, the mutation of the human being. In these complex topics are grafted positive and constructive visions, sometimes tinged with humor. Belgian and international artists as Sugimoto, Boetti, Kingelez, Warhol, LaChapelle, Gursky, Op de Beeck, Yongliang, Turk, Alÿs, invite us … and to (re) think about the future. The complementary exhibition from the Louvre Museum (24/09/2015> 01/04/2016) projects in the future, based on a subjective reading of the past, conceived and carried by artistic creation previous millennia. Both exhibitions are inspired by the book by Jacques Attali “A Brief History of the Future” (Ed. Fayard, translated into 18 languages).

„A Brief History of the Future”: A Brave and Controversial Look at the Twenty-First Century by Jacques Attali

In 1976, a French polymath called Jacques Attali wrote a book that predicted this crisis with astonishing accuracy. It was called “Noise: The Political Economy of Music” and he called the coming turmoil the “crisis of proliferation”. 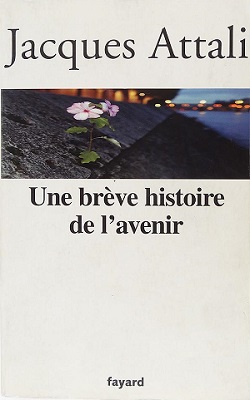 „A Brief History of the Future” is a prospective history book about the next 50 years by Jacques Attali. The original edition was published by Fayard in 2006.

The first third of the book retraces Human history from prehistory to today, with an emphasis on the rise of capitalism around 1200. It describes Dumézil’s three Orders (religious, military and economic) as the “ritual order”, the “imperial order” and the “merchant order”, noting that the “merchant order” came to supersede the two others.

The “merchant order” went through nine successive geographical “cores” associated with a characteristic technology. The core cities were Bruges with the central rudder stock, Venice with the caravel, Antwerp with printing, Genoa and accounting, Amsterdam with the fluyt, London and the steam engine, Boston and the piston engine, New York with the electric engine, Los Angeles and the microchip.

A city becomes a “core” when it becomes able to transform a service into an industrial product. The close vicinity becomes the “environment”, and the rest of the world becomes the “periphery”.

Fall of the US empire

The prospective part begins at the third chapter, which predicts the fall of the US Empire before the end of the ninth form of capitalism, estimated to take place around 2035.

It would be followed by a polycentric world, with nine dominating nations on all continents: the European Union, the USA, Brazil, Mexico, China, India, Russia, Egypt and Nigeria. Some of them, notably China, India and Nigeria, as well as other countries artificially created after colonisation, could undertake an explosion process similar to that of USSR in 1991, with as many as 100 new countries emerging. Japan, Indonesia, Korea, Australia, Canada and South Africa would also play important roles as major regional powers.

A process of “nomadisation” would stem from technological factors, like the Internet; from demographic factors, like aging of developed populations which would entail massive immigration from Southern countries to pay retirements; and from development of megapoles.

Increase of world population would entail a doubling of global farming production. Urbanisation would make forest disappear everywhere, except for Europe and Northern America where artificially maintained ones would subsist. This would cause further increases of carbon dioxide in the atmosphere and accelerate global warming. Consecutive droughts would make water a rare resource, and greatly reduce biodiversity.

The “nomadisation” process would make nation-States irrelevant, transforming the world into a chaotic market called “hyperempire”. The entire planet would work according to an ultra-liberal economy and a form of democracy with “revisited” standards. The citizens would see themselves as “global citizens” who want their work to serve a “higher purpose”.

The ruling class, called “hypernomads”, would ground its power on a middle class of 4 billion “virtual nomads” comprising technicians, scientists, managers, engineers, etc. The “virtual nomads” would live a sedentary life, but work in networks for companies without a central location. 3.5 billion “infranomads” would subsist in misery.

“Infranomads” are expected to revolt violently against their condition, stemming a resurgence of national entities and crystallising conflicts around traditional borders of ethnicities, religions, etc. Technologicial improvements in weaponry would put Humanity at risk of destroying itself in this conflict.

Attali mentions Wikipedia as an example of “collective intelligence” which could compose hyperdemocracy: “The Wikipedia encyclopedia is for now an aggregate of the intelligences of her authors, but it will – and indeed already being to – produce, through collective work, an overall result that is different from what individuals wanted“.

What will planet Earth be like in twenty years? At mid-century? In the year 2100? Prescient and convincing, this book is a must-read for anyone concerned about the future. Never has the world offered more promise for the future and been more fraught with dangers. Attali anticipates an unraveling of American hegemony as transnational corporations sever the ties linking free enterprise to democracy. World tensions will be primed for horrific warfare for resources and dominance. The ultimate question is: Will we leave our children and grandchildren a world that is not only viable but better, or in this nuclear world bequeath to them a planet that will be a living hell? Either way, he warns, the time to act is now.

…to know today how the future will be : http://www.amazon.com/Brief-History-Future-Controversial-Twenty-First/dp/1611450136

Tags
history of the future

80 science fiction stories around the world