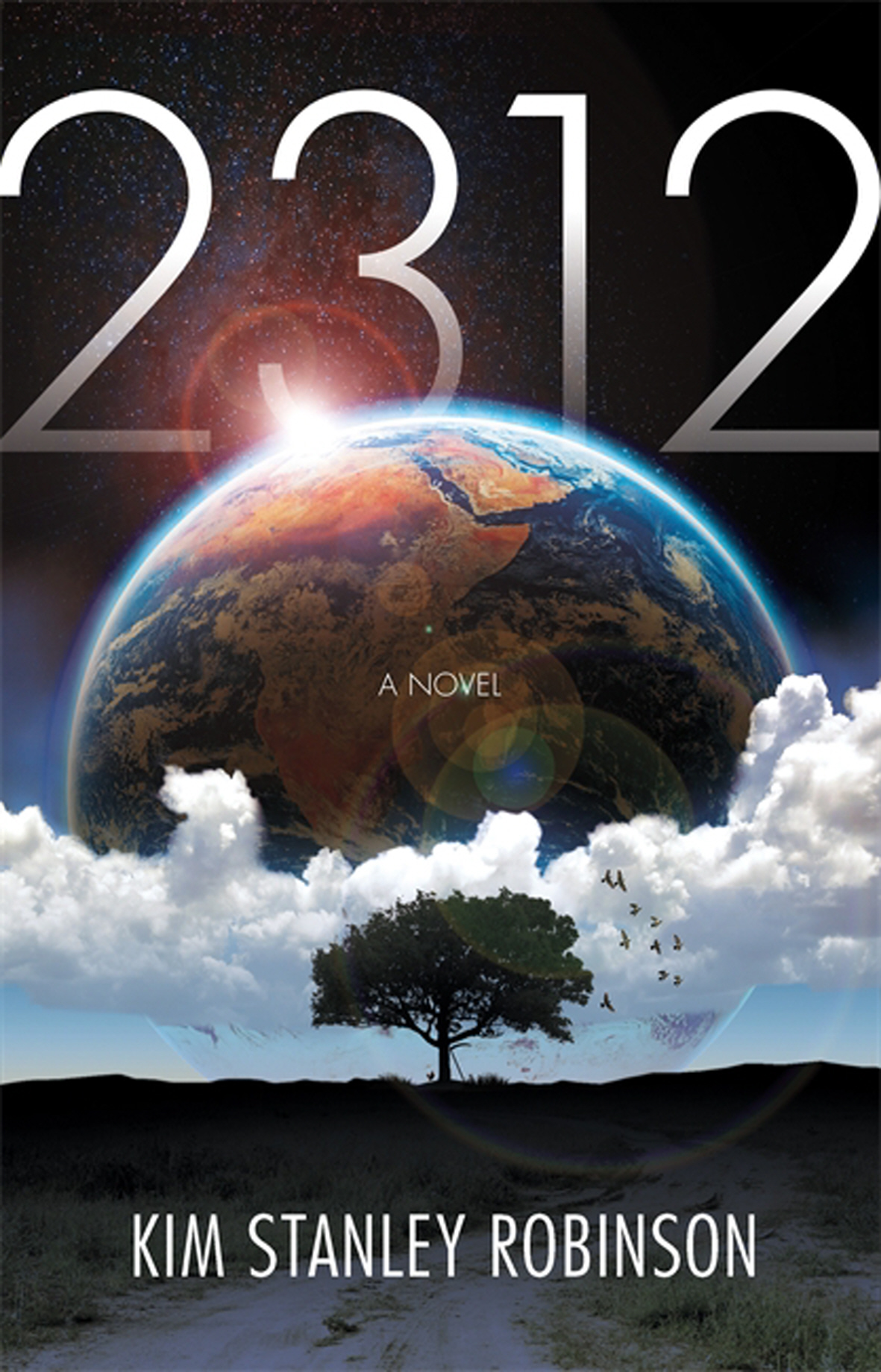 The novel 2312 attracted my attention because of the reviews that pointed it as a rare example of a positive future. I don’t know if the previous reviewers intentionally avoided the word Utopian, we live in the age when the horror and dystopian books sell better than anything (may be, except for the multi-volume fantasy sagas) and movies, and branding the book as positivist may do it a disservice.

Not for me, though. Growing up on a hefty diet of Eastern European pre-changes SciFi diet, and becoming later a devoted fan of TNG fan, I often found myself in search of more humane and humanistic futures, where the conflict is between the good and the better, and the mysteries of the Universe are the enemy of the protagonist, and not an evil fellow human being. The Culture with its moral imperative to do good, is dear to my hearth, and indeed, I found some parallels between the ideas of the late Banks and Robinson.

The following is a mild spoiler – most of the information I will reveal becomes apparent to the readier in the first few chapters.

Formally, 2312 is a XIV century romance – mystery cross-over. The reader follows two main characters, Swan and Wahram on a quest across the Solar system to save the humanity. The stars are still too far, but people already live everywhere – from the new asteroid family discovered within the orbit of Mercury, to the trans-Neptunean objects. Venus and Mars are in advanced stages of terraforming. A countless number of hollowed out asteroids are turned into terraria where various ecosystems – modeled after the natural or completely artificial – thrive. Technological advances have made the travel between planets short, have brought long and healthy lifespans, and allowed for various body modifications. The latter made possible some gender experiments that Robinson waves into the story, following the Ursula Le Guin’s tropes from her famous novel The Left Hand of Darkness. However, the society has not progressed much beyond the modern day, and the sensibilities of the people are pretty much present-day. In this respect, it is interesting to compare 2312 with the semi-organized/semi-anarchistic nature of the outer colonies in the Quiet war series by Paul McCauley (that, at least in the book, ultimately loose the war against the Earth-based totalitarian empire, I should add).

In contrast with the rest of the Solar system, the Earth of 2312 is in shambles (but not as bad as in the Baccigalui’s Shipbreaker), suffering the consequences of global warming. The only improvement we find is that the dirty streets of New York have turned into channels filled with clear ocean water, making the city a new (and better) version of Venice.

The novel takes place at a moment when the gradually accumulating changes due to the on-going terraforming, economic, climatological and other projects and natural processes are about to trip the balance of power in the Solar system. Swift action is necessary and the untimely death of Alex, a close relative of Swan that used to hold a position we could call a prime minister of the colony on Mercury), gets the two lead characters together, and involves them into a vast real politik game, aimed to preserve the piece and prosperity that the Humanity has enjoyed until recently.

Robinson stays true to his very technical style, – familiar from his Mars cycle – giving extensive details about politics, history, science and technology. For some this may be a drawback, but I like to see how the world of 2312 works, and how it came into being. The novel also spends many pages on the romantic story line, following how Swan and Wahram grow closer together. Perhaps, the most memorable is their quest – again, similar to the expedition through the ice from The Left Hand – when they must cross the burning side of Mercury (I won’t disclose how).

However, I have a problem with the novel’s characters.

Earlier in her life Swan used to be, what we would call today, a landscape artist (although the expression is not encompassing enough, her work includes preservation biology) shaping the biomes in the asteroid terraria. The artistic part dominates her personality, she is prone to adopt every fashionable body mods, and perhaps this is the motivation for the apparent political deattachment between her and the otherwise close Alex. It seemed to me she was just odd, some times cold and unreliable (and I don’t mean hear unreliable narrator!), even erratic. The loss Swan suffers early in the novel makes her sympathetic, but the more I grow to know the character, the harder it became to associate with her. I found it scary how she preferred the company of animals over people – there is a memorable scene showing her stranded in a sinkhole with a real wild wolf, when she is quite comfortable, which can not be said about Swan during a few scenes of her interaction with the workers during the Earth restoration project. Perhaps, if Robinson had given us more of a glimpse into her inner struggles, the readers could have been able to feel for her. Instead, she comes out as a cold uncommunicative person.

Her partner is a bureaucrat – albeit by the outcome of a lottery – but enjoys his position, and he is quite good at the scheming it included, as we can see during the same restoration project. Perhaps, this is it my distrust to the bureaucratic caste speaking here, but I found I hard to like him either. We learn that he is patient, determined and disciplined, but this is about it.

Unfortunately, these to characters fall short, when compared with deeper and lively characters from other recent novels: the memorable and resourceful android-concubine Freya from Saturn’s Children by Charles Stross that is out of job after the humans have died out, or the old conjoiner and veteran of many wars Nevil Clavain, and the strong attachment to his daughter/no-daughter Felka, from Revelation Space and its sequels by Alastair Reynolds. I am not giving examples from Le Guin or Strugatsky novels, limiting the comparison to the same sub-genre.

A missed opportunity in the novel, at least to me, was the lack of feeling of the grand scope of events – 2312 covers an enormous undertaking, no less than the restoration of the Earth flora and fauna to the pre-collapse level. However, the scale of this event was lost on me, and a couple of times I had to remind myself how big, long and difficult this project is. I expect it is comparable to the construction of medieval cathedrals – built by a vast multi-generational cast of construction workers, architects, painters. The “bombing” of the planet with animals made it too easy (not to mention irresponsible – the reappearance of the wild animals did lead to some deaths). Here probably the novel would have benefited from additional points of view and more indicators of the time’s passage.

Despite the few drawbacks, I liked 2312, albeit mostly for its world building. Clearly, Robinson has spent a lot of time and efforts to make it believable. I would not say it came at the expense of the characters, because they were also well though. It is just that his choice to make them introvert, bordering on self-absorbed and up-tight, didn’t make them very sympathetic for me. I hope it doesn’t take this kind of people to make a positive future. I like better the Banks model of playful people who enjoy their happy world.

In the past, Valentin worked at the Paranal Observatory (Chile) of the European Southern Observatory. Among his primary research areas are the dynamics of star clusters, formation of stars, brown dwarfs, and exoplanets around such objects.

Valentin Ivanov and Ray Jayawardhana are two of the pioneers of the investigation of the planemos, a special cast of exoplanets. They discovered the first double planemo Oph 162225-240515. This discovery, came just before the debate about the 2006 planet definition, and posed the problem about the distinction between planets and low-mass stars (brown dwarfs)

Valentin D. Ivanov was born in the town of Bourgas, Bulgaria in 1967. He obtained his master degree in physics and astronomy at the University of Sofia in 1992. He earned a PhD degree at the University of Arizona, Tucson, Arizona, U.S.A. in 2001. He became a fellow at the European Southern Observatory, Cerro Paranal, and since 2003 he has been a staff astronomer at the European Southern Observatory, Paranal where he is instrument scientist for the wide-field near-infrared camera VIRCAM mounted at the VISTA_(telescope).

In 2006, together with Kiril Dobrev, he has published a Science Fiction story collection in Bulgarian. Valentin is also writing science fiction and cooperated with the World SF Blog and SF Portal.

How I Saved the World, a story in the anthology Dialmonds in the Sky, Ed. M. Brotheron (English):http://www.mikebrotherton.com/diamonds/?page_id=134

Job Interview, a story in the e-zine for International SF Internova (English): http://nova-sf.de/internova/?p=620A