The Delos Days will host a rich series of meetings, debates, panels, presentations and special Kaffeeklatsch discussions. Specialists on all types of fantastika and the editors of Delos Network: Fantascienza.com, Fantasy Magazine, Horror Magazine, Thriller Magazine, Sherlock Magazine, Writers Magazine, will be there.
Many guests, many initiatives. Absolutely impossible to get bored , and if even at some point in these three days there will be no one talking about science fiction, there are all the meetings dedicated to fantasy, horror and thrillers with their own protagonists. And if you do not find anything, you can always follow the author of this article, it will be at your disposal!
The complete program, now in a convenient pdf format to download, on the event’s dedicated website : www.delosdays.it

The cultural association Delos Books was founded in 2003 by Silvio Sosio, Franco and Luigi Forte Pachì, with the aim to continue and expand the publishing and the online publishing, continuing the activity of the former Solid Publishing House. To the mangement were later added Franco Clun and Gianfranco Viviani.
The Delos association, which is a non-profit organization, operates mainly in three areas: traditional publishing, online publishing and organization of literary competitions.

Fantascienza.com is one of the most important Italian websites dedicated to science fiction and was awarded in 2008 the Prize for Best Italian Professional Magazine. It features a journalistic section and other themed sections, such as the Vegetti Catalogue of the fantastic literature published in Italy (derived from the Catalogue of science fiction, fantasy and horror compiled by Ernesto Vegetti and others : http://www.fantascienza.com/catalogo/), the Photo Museum of the Italian Science Fiction (http://www.fantascienza.com/mffi/), the gallery of Fantaiku, the Italcon official website and more. It is one of the biggest european sites dedicated to the imaginary domain (SF, fantasy, fantastika, horror, weird).

Launched in 1994, Delos Science Fiction (http://www.delosstore.it/delosbooks/43993/delos-science-fiction-155/) is the oldest Italian magazine on the web. Winner of various italian and european awards as the best science fiction magazine, Delos has published over one hundred issues. After an experiment for a few months on Lulu.com, now finally Delos Science Fiction is also available in printed version at affordable prices. Each number is between 60 and 80 pages. There are ten issues per year, every month except August and December.

Robot  is the legendary SF magazine of the seventies, back in business. Directed by Vittorio Curtoni, presents fiction and columns, with the help of a prestigious team of collaborators.

Delos Store is the online library where you can find all publications of Delos Books and the books of science fiction and fantasy of all other publishers, new, used and hard to find.

Here are the Delos Days events. See you there !

Saturday, September 14th
9:30 in the Central Hall : Welcome to the Ten-Year Delos Days – Opening of the event panel.
The Delos Network welcomes the participants and recounts the ten years of work, introduces the program and the event’s exhibitions. With the participation of the Fantascienza.com’s team.

15:00 Beta Room : The Future of Science Fiction
Science fiction has often focused on the future, but what is the future of science fiction ? Has SF the ability to remain a pure genre ? With Alberto Priora , Salvatore Proietti and Vittorio Catani.

16:00 Alfa Room : Anarres and Ursula K. Le Guin
Ursula Le Guin is one of the turning points of SF & Fantasy, revolutionizing the canons of these genres. With Salvatore Proietti, Emanuele Manco and other guests. 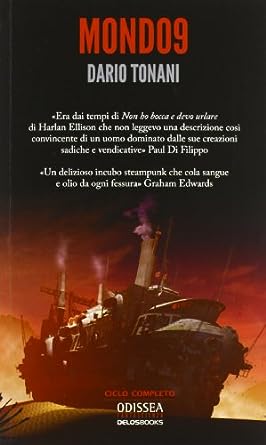 15:00 Beta Room : Stranger in A Strange Media
Can there be a well-informed science fiction journalism not belonging to a niche ? A panel on the non-specialized media and the science fiction. With Alberto Priora, Salvatore Proietti, Giuseppe De Micheli, Ivan Lusetti , Vittorio Catani.

16:00 Alfa Room : Fahrenheit 451 ( when the player gets hot)
For whom we write the news ? Who are the most interested ? What triggers heated debates and which news leave the readers indifferent? A panel that moves to the other side of the fence. With Alberto Priora, Dario Tonani, Ivan Lusetti .

Reposted by the courtesy of Alberto Priora and Fantascienza.com. Thank you !